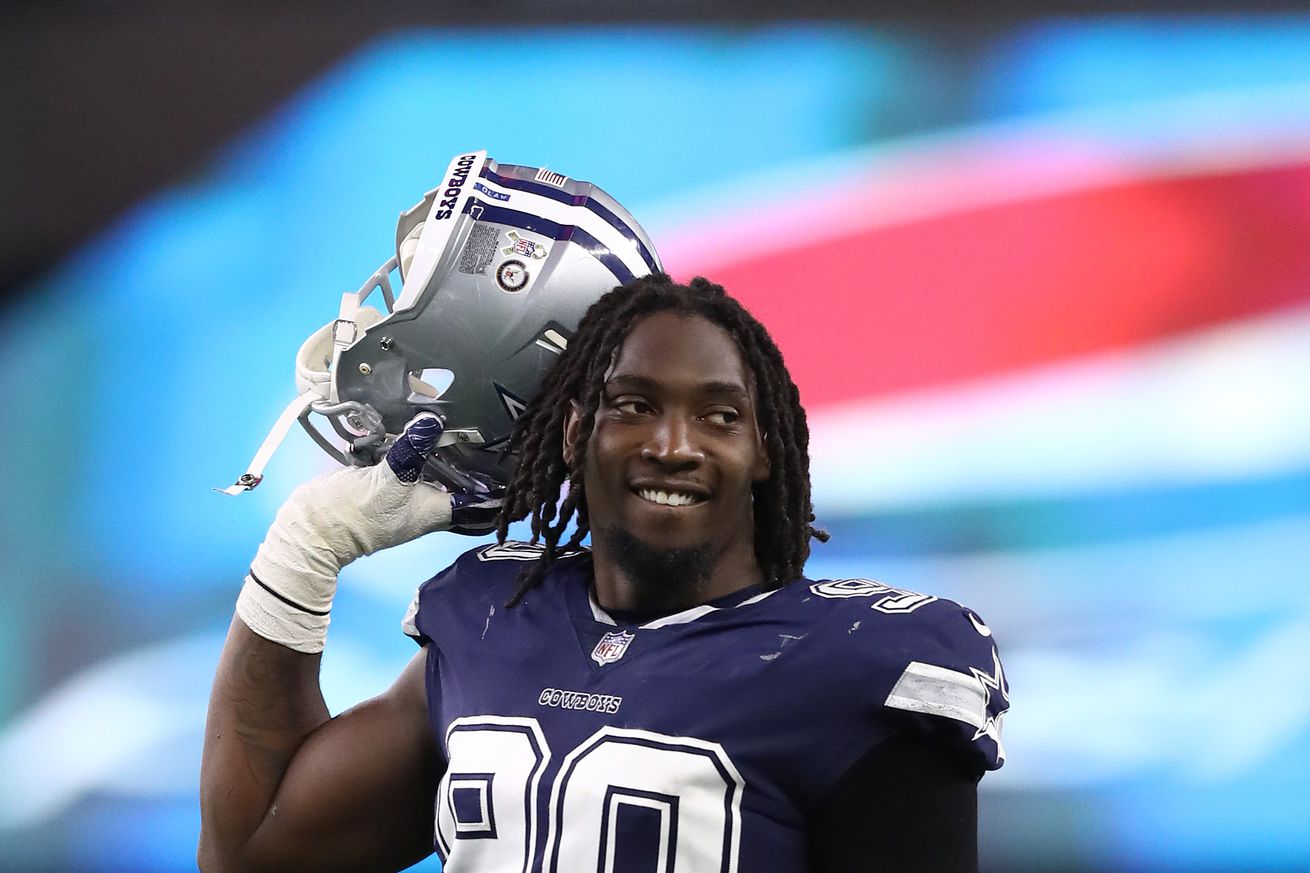 Projecting landing spots for the NFL’s top free agents in 2019 – Michael Renner, Pro Football Focus
Renner doesn’t believe the Cowboys can hang on to Demarcus Lawrence, won’t get Earl Thomas either, and may have to settle for Grady Jarrett.

Demarcus Lawrence, Indianapolis Colts: The Colts have more money to spend than any other franchise this offseason, meaning they can afford to play a little loose with their pocketbook to add talent. Lawrence certainly qualifies as that with back to back 88-plus overall graded seasons.

Earl Thomas, Green Bay Packers: The league’s best single-high safety goes to a team that played with a middle-of-the-field safety on 61 percent of their snaps a season ago.

Grady Jarrett, Dallas Cowboys: With obviously no more Demarcus Lawrence in this scenario, Dallas needs to replace his production along the defensive line. Jarrett is built to play in Rod Marinelli’s penetrating one-gap defense.

Lawrence turns 27 years old in April and should be in line for a deal at or near the top of the market, comparable to what Aaron Donald and Khalil Mack received last offseason. He’s not necessarily quite as good as those two players, but he is damn close and is both the best available defender on the market this offseason and one with a ton of leverage. If Dallas franchises him again, the Cowboys may not be able to afford a long-term deal next year. They need to lock him in now before Dak Prescott’s extension kicks in.

One thing to note here is that Lawrence’s agent also represented Olivier Vernon when the pass-rusher got a five-year, $85 million deal from the division rival Giants three years ago. Expect Lawrence to exceed that deal by several million dollars per year, and to meet or (more likely) exceed the $52.5 million guarantee Vernon was given at the time as well. The Cowboys have stated their intention is to pay Lawrence, but he could be a candidate for the franchise tag if that agreement can’t be reached prior to free agency — even though neither the team nor Lawrence himself wants that to be the result.

I spoke with Lawrence last March after the Cowboys used the tag on him the first time. He didn’t mind the huge single-season salary one bit, but noted that his price would only go up if a long-term deal wasn’t worked out by the deadline. After another standout campaign, he’s been proven absolutely right.

I have Lawrence at $21M a year and Jarrett at $16.5M. I think both will be back but more sure on Jarrett https://t.co/bqSAnm1vp2

Irving’s biggest impact last season came while appearing on a television ad for a local attorney. That pretty much says it all. The Cowboys have doubts about his commitment and desire to play football. As he healed from a severe high ankle sprain suffered in practice, his presence at The Star was minimal. The 2018 season was a time for Irving to prove he deserved a lucrative contract when he hit free agency. It went the other way. The only caveat is that the Cowboys think so highly of the havoc Irving can cause that they kept open the possibility to make him active on game days into the playoffs, even though he ultimately couldn’t contribute.

Should LB Sean Lee be cut or brought back? – Clarence Hill, Fort Worth Star-Telegram
Now that aging and oft-injured linebacker Sean Lee has decided he wants to play in 2019, the Dallas Cowboys must decide whether to cut the nine-year veteran or bring him back at a reduced salary.

The Cowboys could cut his salary to $3 million or less. But even that is possibly too much for a player on minimal snaps who is not guaranteed to be on the field for even half the season, no matter how valuable he is as a mentor to Smith and Vander Esch.

If the Cowboys cut Lee, they could save his entire $7 million salary and add to their more the $50 million in salary cap space for 2019.

Lee wants to play in 2019 but it may not be with the Cowboys.

Travis Frederick details his recovery, and talks about why he could be even better now – Dave Halprin, Blogging the Boys
Will Travis Frederick be back and at 100% in 2019?

Frederick recently discussed his recovery in more detail. He feels like his upper body has recovered as far as the nerve problems associated with Guillain-Barré are concerned, it’s now just about building back the strength.

“Once you get to a certain point, then you’re regaining your strength that you lost vs. the electrical connection that you lost,” Frederick said. “I certainly hit that point in my upper body, which is actually a good thing when you hit that point where you slow down because that means the electrical connection is there and now it’s just building back any strength that you’ve lost. We’re at a point that’s very passable and very usable.”

The one thing that is still not back to where he wants it to be is the explosion from the lower part of his body.

“As far as lower [body] goes, I’m at the point [where] I was missing a little bit of explosion, but that’s the last part of it. The connection is there, now we’re just speeding up the connection.

”That’s the last part of the healing process.”

He’s not sure just where is he is in that part of the process, he is following a very strict routine.

“Now am I running at my top speed? I don’t know because I’ve not hit that number. Am I jumping as high as I have? I’m not sure yet. Like I said, once we get back in March and April we’ll get a good feel on where things are.

”As far as football movements, I do feel real good about that.”

HERE’S WHY DAK, MALIEK, AND A.B. ARE GETTING BIG PAY RAISES IN 2019 – Kristi Scales, 5 Points Blue
Performance bonuses for Dak, Maliek, and Anthony Brown are just around the corner.

Dak, Maliek and A.B. are entering their fourth seasons. But instead of earning the four-year minimum base salaries of $720,000 this coming season, they are each getting pay increases and will earn $2.045 million in salary in 2019 thanks to the Performance Escalator Bonus.

The Proven Performance Escalator calls for players drafted in rounds 3-through-7 to receive a pay raise if that player took part in 35% or more of his team’s offensive or defensive snaps in two of his first three seasons, or averaged 35%-or-more playing time cumulatively over those three seasons.

If the player reaches the playing percentage, his base salary for the fourth year of his rookie contract is raised to the level of that season’s lowest restricted free agent tender.

Why does the NFL have this kind of clause in its Collective Bargaining Agreement? It’s to reward young players who are on the lower end of the pay scale with a big pay raise if they play a lot of snaps.

Film room: 5 players the Cowboys should target in 2019 NFL draft, including a potential steal of the entire class – John Owning, SportsDay
Mock draft season. This one is from SportsDay’s John Owning.

Anderson is one of the most intriguing players in the entire 2019 NFL draft. On film, Anderson has the skills of a running back who should be selected in the top 75 picks.

Listed at 6-foot-1 and 219 pounds, Anderson is a big back with impressive athleticism for his size. As a ball carrier, Anderson has plus vision to read his blocks and the leverage of defenders to identify the best running lane.

At his size, Anderson is the rare running back capable of making defenders miss in tight or open space. His elusiveness only makes his power more effective, as defenders have to be mindful of Anderson’s ability to make them miss.

Mailbag: Slotting This WR Prospect? LB Depth? – DallasCowboys.com
The mothership crew takes a look at some of the top NFL draft prospects and where they’ll fit in.

With the uncertainty surrounding Cole Beasley, would Andy Isabella be a good replacement for him and what round grade would you figure he would have? –NICK MOHR / CHICKASHA, OK

Bryan: Andy Isabella is a good player and have in third round but I wouldn’t just focus on him. I’ve seen several prospects that could fill that Beasley role if they do move on. Please watch The Draft Show each week at 11 a.m. CT to learn more about the names.

Star Evaluation: How Williams Fared vs. Donald – Nick Eatman, DallasCowboys.com
Dating back to the Cowboys loss in the NFC Divisional Round game, Nick Eatman takes a look at left guard Connor Williams performance in his rookie season.

What’s Been Good: The good thing about Williams is that he showed enough flashes in his first season that he’s going to be a good player in this league. Not sure right now where his final position will be, considering he played guard last year, has played tackle in college and even Jerry Jones didn’t dismiss a potential look at center down the road. But he’s got enough versatility, coupled with size and determination and that all-important mean streak that has shown the Cowboys that Williams has some skill to work with.

What’s Been Bad: Williams had some rough patches throughout the year – as to be expected for a rookie guard making a position switch from college. Not everyone is Zack Martin and Williams certainly had a tougher transition to the NFL than Martin, who was an All-Pro pick his first season. Williams had a tough time with some of the bigger defensive tackles and after he had a knee injury, he didn’t get his job back from Xavier Su’a-Filo when he was healthy. It took an ankle injury from Su’a-Filo to get Williams back in the lineup.

Ranking the Top AAF Players Who Could Be in the NFL Next Year – Brent Sobleski, Bleacher Report
Which former Cowboy ended up on the list?

According to Pro Football Focus, [Damontre] Moore posted an eye-popping nine quarterback pressures in his first AAF action. That’s an impressive number regardless of the level of competition.

The 2012 consensus All-American has always been considered a natural pass-rusher. He displays good bend and technique. Questions arose about work ethic and maturity.

The Alliance is a chance for Moore to put it all together and show he’s willing to make the effort. If he does those things, he should be rewarded with another opportunity.

I think around $11M and either Dallas or SF. https://t.co/7oj5RDuSZx