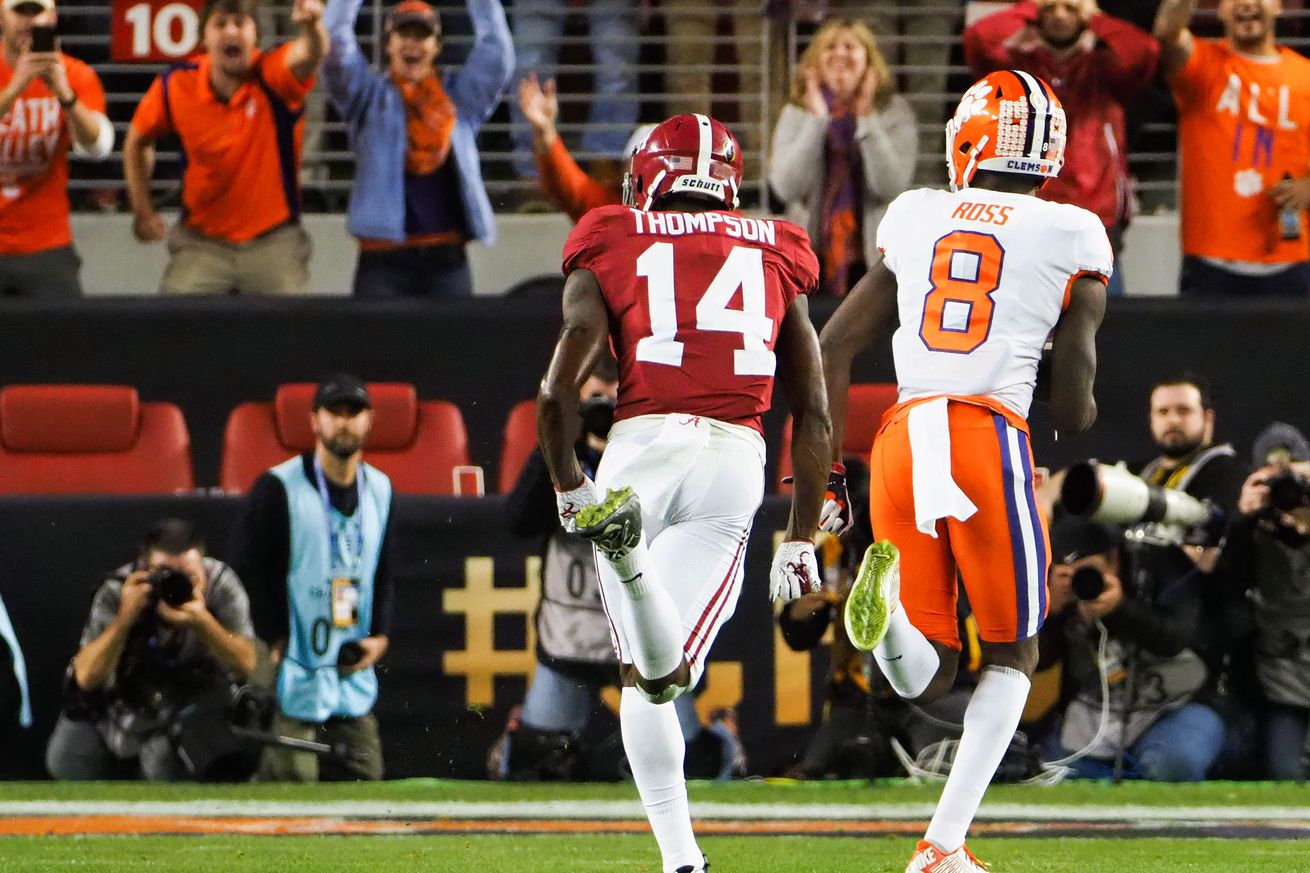 The Cowboys could benefit from a slide by the Crimson Tide’s star.

Combine results: did not participate

There was once a time when Alabama safety Deionte Thompson was considered the consensus top prospect at his position in this draft class. Thompson burst onto the scene at the end of the 2017 season and had a hot start to the 2018 season, all of which made him appear to be the next great Alabama defensive back. But his last half of 2018 revealed some flaws in Thompson’s game that’s led to him dropping down draft boards.

Thompson has primarily played free safety for the Crimson Tide, and in their defensive scheme that meant Thompson got a lot of time playing as a single high safety. This helped him showcase some of his more athletic traits that put him in good position defensively. Thompson has really good explosiveness and long-range speed, which allows him to cover a lot of ground very quickly. That’s the kind of trait that is necessary in the type of free safety Alabama uses.

Similarly, Thompson is a very fluid player in the open field. It’s easy to tell that all of the movements and breaks come naturally for him, whereas some players can become too robotic in their movements and cause them to be too patient or pensive, getting burned by faster receivers. That’s not a problem with Thompson, who is comfortable in his center field role and does a good job of patrolling all across the back end of the field.

Thompson is also very skilled in going after the ball, although not necessarily a ballhawk. Whereas others like Juan Thornhill or Amani Hooker have a knack of pulling the ball out of the air for the interception, Thompson is more adept at ensuring an incomplete pass. His athleticism allows him to challenge nearly any receiver at the catch point and Thompson is good at going after the receiver’s hands and denying the ball from being caught. He only has three career interceptions, and it’s primarily because of this approach he takes.

Thompson does seem to have a ballhawk mentality, though, even if the statistics don’t back it up. He’s very quick to break on the ball and expresses a desire to go after the ball every time it’s in the air. This is one of the problems with Thompson’s game, though. He’s too eager to make the play, and that aggressiveness gets him in trouble. He’ll bite on pump fakes or take a bad angle in his effort to make a play on the ball, and it’s resulted in some big gains being given up.

This goes to the larger, overarching flaw in Thompson’s game that’s contributed to his stock tumbling down: he’s too undisciplined, which is rare for a player in Nick Saban’s program. As explosive as Thompson is, his poor footwork can sometimes negate that, as he gets his ankles crossed or takes awkward strides that don’t allow him to get to where he needs to be in time. He’s not the most patient player in a zone either, which often allowed receivers to fake him out or get him to bite on shallower routes while deep routes were left open.

While Thompson didn’t get too many opportunities to contribute in run defense due to being a single high safety, it seems that his lack of discipline carries over there as well. When Thompson runs up to make tackles, he usually comes in out of control. This is partially due to his footwork being so inconsistent, but Thompson also takes bad angles with a somewhat high regularity. Far too often, Thompson lowers his head before going in for the tackle, which contributes to poor form and missed tackles.

That said, Thompson brings some force on the rare occasions he does come down in run defense. Just as his athleticism can sometimes make up for his poor fundamentals, so too does Thompson’s strength as a tackler. His 103 tackles in the last two years, only one of those seasons seeing him as a full time starter, didn’t happen by accident. Thompson isn’t incapable of tackling, but he’s not a wrap up tackler and for that reason he probably can’t be counted on to play up in the box too much.

Another big question mark casting doubt over Thompson’s stock is a torn ligament in his wrist that kept him out of both the combine and his pro day. Thompson had surgery to repair it in the offseason and missed the key workout sessions that many teams place a lot of stock in. While Thompson is almost certainly going to be ready to play for whichever team drafts him, the injury has to be a concern to some.

All of this pools together into a scenario where Thompson, much like another former Alabama safety by the name of Landon Collins, could fall into the second round for some lucky team. Thompson will likely fall farther than Collins did, and he could be an option for the Cowboys at 58. Taking Thompson would likely mean that Xavier Woods would have to play more strong safety, as Thompson can’t be relied on in that role in Cover 1 sets.

While that wouldn’t necessarily be a bad thing, as Woods is good enough to play either safety position, his best fit is as that single high safety. Pairing Woods with Thompson might jeopardize the defense’s run contain, but it would also give them two dynamic coverage players in the back end of the secondary. In the short term, at least, Woods could play free safety with George Iloka at strong safety on run downs, and rotate Thompson in at free safety and move Woods into the box in passing downs. That’s good in theory, but what would be the solution after Iloka is departed?

Those are questions for the Cowboys front office and coaches to answer. Thompson is a player with some legitimate talent, but he needs serious refinement of the fundamentals in order to become the player he was once billed as. If Dallas thinks they can develop him in those key areas, then getting him at 58 could turn out to be a steal. After all, Jason Garrett’s well-documented relationship with Saban could give them some insider knowledge on the safety.