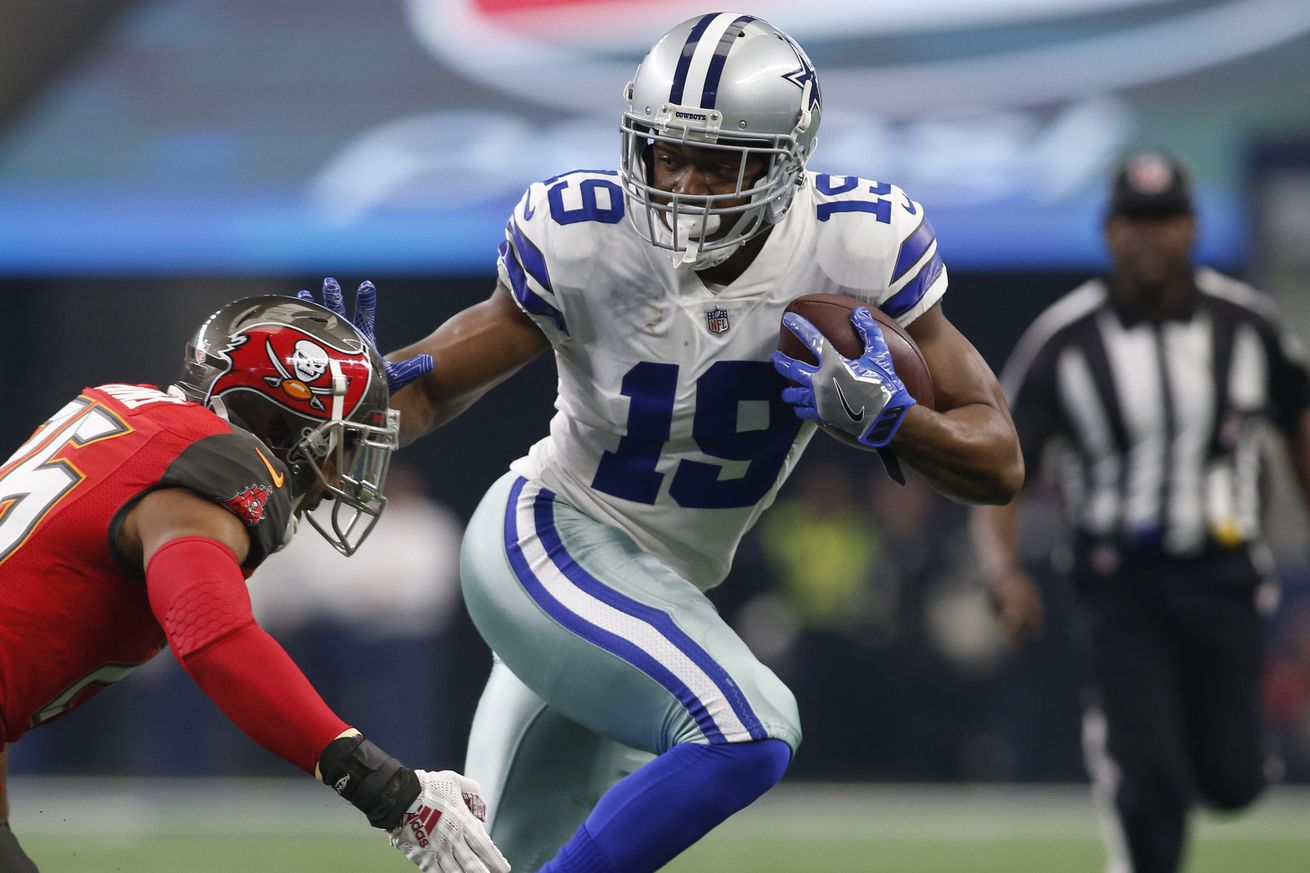 And, oh yeah, the draft is this week.

Amari Cooper is the Cowboys’ 2019 first-round pick. What will his contract extension look like? – Bob Sturm, The Athletic
The Sturminator thinks Amari Cooper is one of the best wide-outs in the league and is going to get a contract that reflects that status.

Those other deals, though — Evans, Hopkins, Cooks and Landry — are all right around the same neighborhood. They are all five-year contracts and all range right around $16m a season ($80 million over five years). You could argue some of those players are better than Amari Cooper, but Cooper could argue that the cap keeps going up and none of those are 2019 contracts. All of them have practical guarantees between $47 million and $55 million. There has been one significant wide receiver contract written in 2019 and that is on the chart, too. Adam Thielen signed a four-year, $64 million contract ($16 million per) and he will turn 29 during training camp.

This contract should be pretty simple, really. The Cowboys should be able to get it done before the season starts and that would allow them to create plenty of room on their 2019 budget to allow for another, more difficult deal; one which likely involves their quarterback.

I would project Cooper’s deal to run five years long and total $80 million with a $40 million guarantee at signing and practical guarantees for the first three years of the deal ($48 million). The Cowboys could possibly tack on a sixth season for accounting purposes, but this contract could be negotiated over brunch. The Cowboys would lock Cooper down for his age 25-29 seasons and move on to the next item on their agenda.

Frederick Updates His Progress, Offseason Plan – Rob Phillips, DallasCowboys.com
Travis Frederick was back at Cowboys’ facilities in an official manner last week and we get an update on his recovery from Guillain-Barre syndrome.

Frederick said he’s on a modified workout and weight-lifting plan after having clean-up shoulder surgery and a hernia repair earlier this offseason.

“We eased kind of back into that to make sure that everything’s healthy and stable before we start going heavy, but as far as on-the-field stuff, I’m doing almost everything,” he said. “We’ll have some stuff modified in OTAs, but most of that is for the shoulder. You don’t want to re-injure something while it’s coming back from the surgery.

“But as far as on the field, I feel good, and in the weight room in my other auxiliary lifts I’m doing really well there as well. So for the most part I feel really good. We won’t know until I get out there and put the pads on and take my first rep whether or not it’s going to go well.”

Top 100: Bryan Broaddus Reveals His Big Board – Bryan Broaddus, DallasCowboys.com
It may have escaped your attention but the NFL draft is happening this week. If you haven’t been swimming in endless mock drafts the Broad one’s top 100 board might be a good place to start.

Draft week is upon us, which means there’s an uptick in interest as people try to figure out who their favorite team will select on Thursday night. But for those of us that have been evaluating the 2019 draft class for months, the heavy lifting is done.

With that in mind, I finally feel comfortable on where I stand in my evaluations of this year’s group. It’s been a long road since I started my grading back in January, but I finally managed to sort out how I feel about the top of this draft class.

In years past I’ve done a Top 50 board, but I decided to expand that in 2019 since the Cowboys don’t hold a pick until the end of the second round.

So here’s my Top 100, as we take a look at this draft’s top players – including some guys I think the Cowboys will be targeting on Day 2 of the draft.

Ezekiel Elliott: Cowboys RB fat-shamed for one unflattering photo – Ted Berg, ForTheWin.com
In the latest episode of “over-the-top reactions to social media posts” we have yet another “Ezekiel Elliott is fat” story.

Cowboys running back Ezekiel Elliott shared a photo of himself with his 2.7 million Instagram followers over the weekend. The picture shows Elliott with Broncos linebacker Von Miller at the annual Von Miller Day celebration in Miller’s hometown of DeSoto, Texas — a Dallas suburb. Sponsored by the Dallas Mavericks and Miller’s charity, among others, Von Miller Day is a free event featuring kickball and bouncy castles and generally sounds awesome. It’s hard to blame Elliott for being there, but Elliott presumably didn’t have to be there. His showing up represents him doing a nice thing for a fellow NFL player and the greater Dallas area.

But on account of this single photo Elliott shared from the event, legions of NFL fans are mocking him for being fat and even spinning it into fantasy-football drivel about his 2019 draft position. Here’s the photo, via Elliott’s instagram. That’s Elliott on the left, with the cool hair and the red shorts:

The Race to Make the NFL Draft an Exact Science – Kevin Clark, The Ringer
The NFL has been relatively slow to adapt to the “analytics” revolutions that has changed the way other pro sports leagues evaluate players. But Clark makes the case that is changing. It’s a good long read.

One of the most useful exercises of the draft is getting a yearly check-in on how teams view the sport. Ten years ago, it would have seemed miraculous that Baker Mayfield, an undersized, spread quarterback, would go first overall, since NFL front offices have spent the past few decades obsessing over quarterbacks’ height and college schemes (just ask second-round pick Drew Brees). It would have been inconceivable that Kyler Murray, a smaller quarterback than Mayfield, who played in the same college system, might go first overall the following year. The draft is a succinct way to figure out which NFL norms still exist and which have been toppled. It’s how we learn what teams think modern football is, so it’s fascinating to see how the data era of football impacts the draft, if at all.

Almost every data person I talk to believes the same things about the draft. The first is that the parts of the process that take place behind closed doors—interviews, prospects diagnosing plays on a whiteboard, character evaluations—are too difficult to quantify, and matter greatly. The second is that NFL scouts are pretty good at their jobs. “Scouts have a keen eye. They see things that are spot on. This is not ‘Oh, these guys not qualified and missing the picture and that’s why the draft is so hit-and-miss.’ It’s not it at all. They know what they see, and they tend to be right,” says Karl Pazdernik, cofounder of Deep Football, a company that applies machine learning to player evaluation. Pazdernik is a data scientist who became fascinated by the draft. Players age so fast in football, he says, that teams have to consistently hit on picks to replenish their talent, significantly more so than in other sports.

SackSEER 2019 – Nathan Forster, FootballOutsiders.com
The Football Outsiders team looks at edge rushers available in this year’s draft and tells us there’s lots of depth but not a lot of high-end, “can’t miss” talent.

The top of the 2019 NFL draft is likely to be dominated by the edge rushers. As many as four edge rushers are projected to go in the top ten, and thus a team with a high pick and a need to upgrade their pass rush is likely to have plenty of highly touted options. But will this group live up to the hype? Will the 2019 draft be to edge rushers what the 1983 draft was to quarterbacks?

SackSEER, Football Outsiders’ statistical system for projecting college edge rushers to the next level, wants to throw just a bit of cold water on the hype following the edge rushers in this draft. Although SackSEER agrees that it is a reasonably deep draft for edge rushers, it also believes that this draft lacks a truly top-tier prospect like Khalil Mack or Von Miller. Rather, SackSEER lumps this year’s top edge rushers together in a group of good but not great prospects that are all more likely than not to have at least some success at the NFL level, but could also easily bust. Additionally, SackSEER’s best prospect this year — who wins that distinction by a projection of less than half a sack — is a player who may not even go in the first round.

Be boring, Jerry! The last thing these Cowboys need is another Round 2 risk or a draft-night trade – Kevin Sherrington, Sportsday
The SportsDay columnist, seemingly unaware of how the Cowboys’ have operated the last eight years, frets that Jerry Jones will get impatient and make an impulsive move.

Stephen Jones’ most critical move Thursday night will be to keep his old man busy and away from the TV. Take him out for a nice dinner and give him the floor. Get him going about the Razorbacks’ ’64 national title. Find out which NFL owner was his favorite patsy. Ask him how long he’s making Jimmy Johnson wait on the Ring of Honor.

Just don’t let Jerry binge-watch the first round of the NFL draft. Because the longer he sits, the more likely he might try something crazy.

And as close as the Cowboys have come to a genuine Super Bowl contender, the last thing they need now is crazy.

What is the most unexpected move the Dallas Cowboys could make in the 2019 NFL draft? – Staff, SportsDay
The rest of the staff, on the other hand, thinks an aggressive move from the Cowboys’ is extremely unlikely.

What move by the Cowboys would surprise you the most in this draft?

David Moore: If the Cowboys parted with a first-round pick in the 2020 draft to move into the first-round of this draft, that would be more than a surprise. It would be shocking.

Jon Machota: No. 1 on my list would probably be trading into the first round. That type of move from 58 is just too expensive. No. 2 would be drafting a running back in the second round. There just aren’t going to be enough snaps available for another running back as long as Ezekiel Elliott is healthy. Getting a quality backup is important, but it can be done later.

Kate Hairopoulos: With the Cowboys, not much is surprising come draft time – expect everything and anything. Still, it’s hard to picture them moving all the way up into the first round. They’ve basically sworn off putting their 2020 first-round pick into play and they’re so far back in the second round, it would be hard to move up.