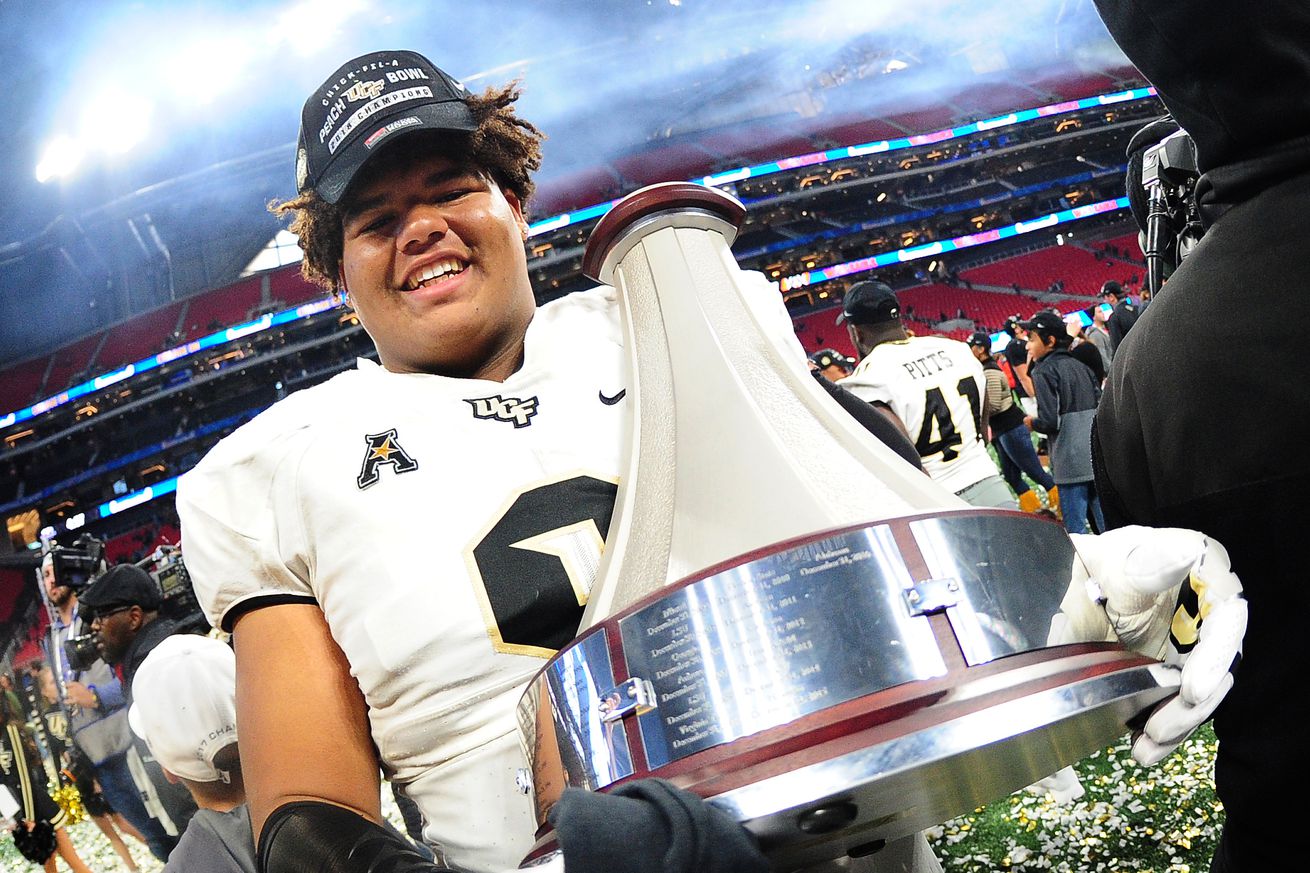 The news links have a drafty feel to them.

The Cowboys drafted a higher-rated player in the third round than the second round. McGovern has experience at center and guard and gives the Cowboys a nasty run blocker with upside as a pass protector. His versatility will give the Cowboys options up front in the future, like possibly moving Connor Williams outside to tackle.

Without a first-round pick, the Cowboys weren’t going to be high on this list, but it is understandable why many fans aren’t excited about Hill, their top pick in the draft. He butted heads with coaches (and teammates) at UCF and needs time to develop. This pick felt like a reach because of their desire to land a high-upside three-technique in a draft with limited options at that position.

Jackson was thought to be a top-100 pick over the summer, but he didn’t quite have the senior year many expected with only six passes defended and zero interceptions. But the size/speed traits are worth betting on in the fifth round, and defensive assistant Kris Richard has a track record of developing long, speedy corners into quality contributors.

Using the Consensus Big Board to determine how teams did in the draft – Arif Hassan, The Athletic
By comparing “consensus” draft evaluations against where a player was picked – and thus how much draft value was invested in him – Hassan tries to see which teams got the most bang for their draft buck. It’s an interesting read.

In the past several years of working with this project — going back to 2014 — Seattle has consistently ranked in the bottom five with regards to their grades against the Consensus Big Board. Given their success on the field, that might initially seem like an indictment of the board, but Seattle hasn’t produced a very good draft over that span, aside from 2015 with Tyler Lockett and Frank Clark. The Seahawks’ ability to win games largely hasn’t been done with many impact players from recent draft classes.

The Raiders had a bunch of excellent picks in rounds 4-6, but because of the high value placed on first-round picks, reaches there are heavily punished. As the 20th-ranked player, Clelin Ferrell isn’t judged as a bad player, but simply someone who likely won’t meet the expectations demanded of a fourth overall pick.

Picks like Quinnen Williams to the Jets and Ed Oliver to the Bills were great, according to the board, but there’s only so much one can “steal” at the top of the draft, so they ended up with the 36th- and 37th-best grades as picks.

Breaking down the Cowboys’ draft & answering your questions on transparency, value and role – Bob Sturm, The Athletic
Sturm breaks the Cowboys’ draft down and tells us their actions reveal their thinking about certain players and positions.

Fans and media don’t generally see “adding talent” as the top objective in a draft. Often, they believe the point of the draft is to turn a perceived weakness into a strength. In some ways, those two objectives overlap. In many, they do not.

The best example is the Cowboys’ handling of the safety position. We all were under the impression that they were going after a new safety at the expense of pretty much everything with pick No. 58, or at the very least pick No. 90. It is pretty easy to look at this roster and see which positions could use an upgrade and which positions seem just fine.

Here is the bottom line: the Cowboys like Jeff Heath way more than most. They focus on the plays he makes and judge them against the plays he doesn’t make. We, in the public, can only recall the plays that aren’t made and generally ignore what he does well. I assume they wanted to upgrade at safety, but only if it was a clear upgrade, and only if the prospect in mind was the best choice on their board. Cleary, despite Taylor Rapp, Juan Thornhill, and Nasir Adderley all being on the clock when their pick came up — and all gone before the end of Round 2 — they were less important to Dallas than defensive tackle Trysten Hill.

Could Pollard Be The Cowboys’ Biggest Pick? – David Helman, DallasCowboys.com
There’s lots of speculation about the innovative ways the Cowboys could use shiny new running back/return /receiver Tony Pollard. It is, after all, the season of optimism in the NFL.

This is the part of the story where it would be smart to emphasize the optimism of NFL front offices at this time of year. It was this exact weekend a year ago when Jones outlined a similar plan for newly-acquired receiver Tavon Austin.

Injuries were part of it, but Austin never realized that potential. He played in nine total games last season, averaging 3.5 touches per outing. Across all categories – receiving, rushing and returns – he tallied just 328 all-purpose yards, along with two touchdowns.

Suffice to say, it’s fair to be skeptical of any proposed plans for an all-purpose player.

Still, it’s hard not to feel intrigued by Jones’ confidence. Pollard was a return man and also caught 104 passes during his college career, but the Cowboys seem convinced that he can handle the duties of a traditional running back.

Do any of the 2019 draft picks have an honest chance of starting when the season begins? If so, who and why? – K.T.

Bryan: Trysten Hill has a lot of talent and he has a chance to beat out Maliek Collins for the job. He’ll start out behind him but keep an eye on that spot.

Rob: A chance? Absolutely. But barring injury to a veteran, I don’t expect a draft pick to start Week One this year. Maliek Collins, La’el Collins and Jeff Heath are entering the last year of their current contracts, so things could look different in 2020 depending on what happens with them. That’s where Trysten Hill, Connor McGovern and maybe Donovan Wilson could step in a year from now.

NFL Power Rankings: New Orleans Saints on top after 2019 draft – Elliott Harrison, NFL.com
The half-life of instant draft grades is about a nano-second so why not combine instant draft analysis with equally ephemeral power-rankings!

The Cowboys required just one piece to put together the premier defense in the league: a big, talented defensive tackle. They found that guy, with a dash of quickness, in Trysten Hill (No. 58 overall) out of Central Florida. If he develops, it will only serve to maximize the abilities of Tank Lawrence and Robert Quinn on the edges, while minimizing the bustiness of 2017 first-rounder Taco Charlton (4.0 career sacks). The last Dallas defensive tackle to impact the game from a four-man front was La’Roi Glover, dating back to the Bill Parcells days. If the kids in the Dallas secondary take the next step this year, look out. Dak Prescott and the offense might only have to put 16 points on the board to win. OK, you’re right, I’m being too friendly to the Cowboys … Make it 17.

Drafted 58th overall (Round 2) out of Central Florida. The marriage between Hill and defensive coordinator Rod Marinelli is a match made in heaven, based on the defensive tackle’s non-stop motor and relentless approach. The 6-3, 308-pounder plays like his hair is on fire on every play, and he promised the grizzled coach that he would bring that same effort to Dallas when he signed a “work ethic contract” prior to the draft. Considering Marinelli’s track record with hard-working defensive linemen and Hill’s natural talents, the Cowboys might’ve added an unheralded difference maker to their frontline.

NFL Draft 2019 Recap: Cardinals are big winners, but Giants may have some questions to answer – Will Brinson, CBSSports.com
And really, it’s not a post-draft review without poking some good-natured fun at the the New York Giants.

A couple different problems here for Gettleman, even though I generally like his overall draft (especially the predictable nature with which he took Dexter Lawrence; I mean that in a good way). One, the haul for Odell Beckham is hard to justify. The Giants got Lawrence, Oshane Ximines and Jabrill Peppers for Odell. In no world do you make that straight up trade. You just don’t. Two, the Giants drafted Daniel Jones and we don’t know when he’s going to play. Gettleman said Jones could sit behind Eli Manning for THREE YEARS which is probably just him saying stuff maybe? Giants fans should hope so — if you spend the No. 6 overall pick on someone and they’re not playing within three years because Eli is still able to trot out there in the same fashion he has for the last year or so, that’s a real problem. I think Giants ownership is giving Gettleman a long leash here, but it was confusing to hear him say he fell in love with Jones after three series at the Senior Bowl. It reeks of an ownership push to get a quarterback and a fear of missing him later. Maybe other teams had high grades on Jones. But if the pick doesn’t pan out, this draft is an unmitigated disaster and it will all be put on Gettleman’s head. That’s a pretty massive risk.

Taco Charlton’s time might be now or never with Cowboys – Charean Williams, ProFootballTalk
The Cowboys have a pretty deep class of defensive line candidates and bringing in more via the draft tells us their feeling about 2017 first round pick Taco Charlton.

Cowboys executive vice president Stephen Jones has called this a “big year” for Charlton. Maybe it’s more like make-or-break for the 28th overall pick of the 2017 draft.

“I’m expecting Taco to strap on his pads, put on his helmet and go out there and compete every day to prove that he belongs on this roster,” Cowboys vice president of player personnel Will McClay said on 105.3 The Fan, via Jon Machota of the Dallas Morning News. “The injury and all those things, he’s going to have to overcome that and be available. But I expect Taco to put his best foot forward and battle and compete for a spot. But you know what? We’re not going to hold the train for anybody. If you want to compete and roll down with us, here it is. Everybody is going to have that opportunity. I expect Taco to be a much better player and a much more productive player. He was turning the corner last year. Injuries happen, all that other stuff. I expect him to go and battle and compete, and if him or anybody else isn’t willing to compete, hopefully we have enough stuff there to keep us strong throughout the process.”

Charlton is the only one of the Cowboys’ past six first-round draft picks not to have made the Pro Bowl.