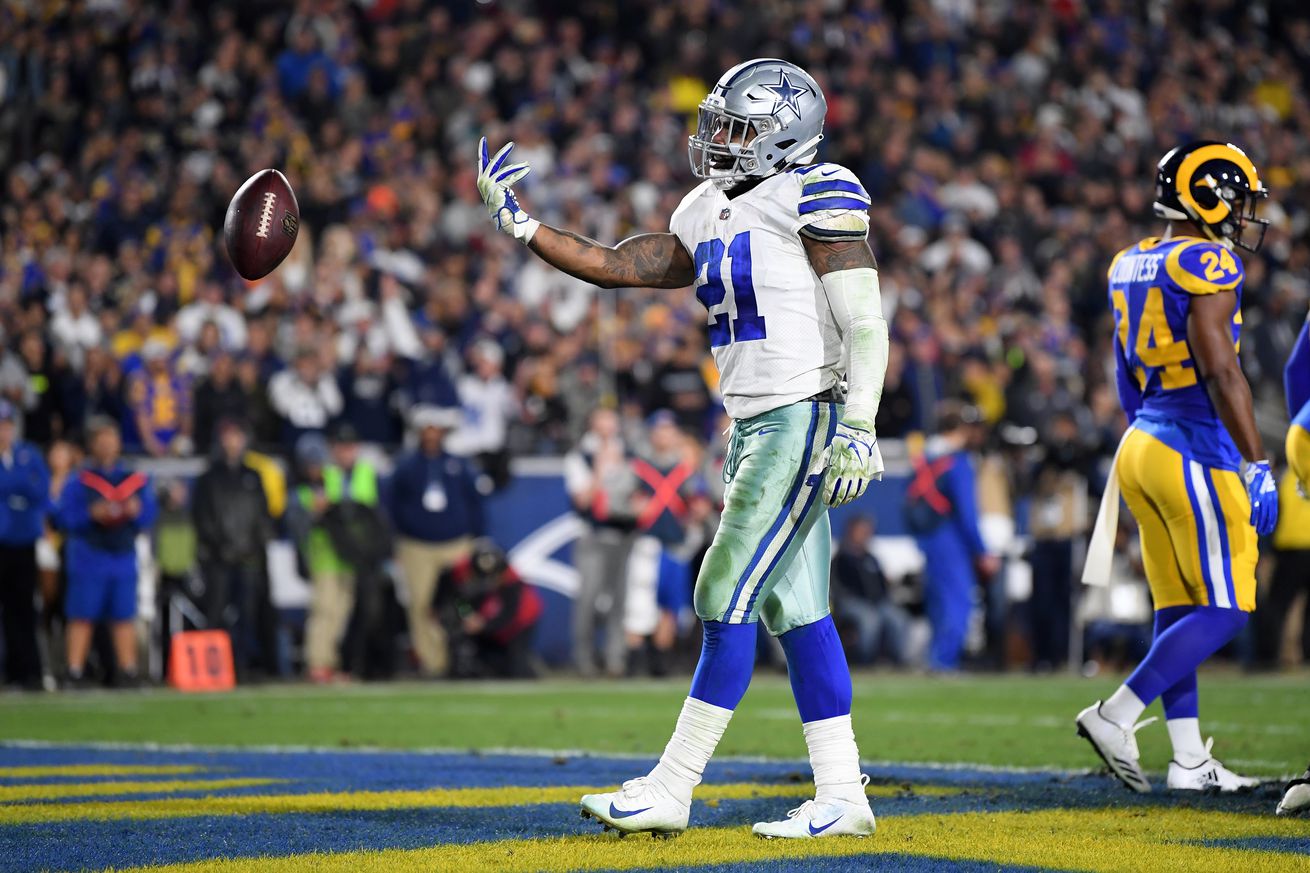 The Cowboys know that Zeke is the engine behind the offense, but at what price point do they start to look for a rebuilt, off-brand engine?

So what’s the holdup? Why is a deal for Elliott seemingly on the back burner?

It’s not because the Cowboys don’t value his importance, Stephen Jones said.

“He’s the straw, if you will, that stirs our drink. He’s a key part of what we’re about,” Jones said on the “Pro Football Talk Live” podcast on Thursday. “Certainly, he’s a priority in terms of ultimately getting him signed. But there hasn’t really been a timetable put on this.”

Jones seemingly reiterated what he said at the NFL Scouting Combine in February in terms of timetable and importance.

The Cowboys already have a starting point in the form of the $52 million extending Todd Gurley got from the Los Angeles Rams before last season.

“We certainly saw what Gurley got paid, and we know that’s probably where it starts, and we’ll go from there,” he said at the NFL Combine while adding they will pay Elliott at “some point in time.”

Predictions are rolling in and hype around the Cowboys is building – RJ Ochoa, Blogging the Boys

It’s prediction season in Dallas. How are analysts predicting the Cowboys to do?

Maurice Jones-Drew seems to somewhat agree with Eisen by the way, at least in the sense that Dallas is going to be a serious contender. He has them winning 12 games in 2019, including 11 of their first 12!

None of this means anything as predictions are hardly an indication of how any team will finish a given season. What it does note though is that the national narrative around the Cowboys is starting to change ever so slightly. There’s even a perceived confidence in Kellen Moore as people tend to buy that he’s going to have a worthy impact on offense.

What do you think of the hype? Justified? Misplaced? Things are changing.

The latest on Randy Gregory: When do Cowboys expect him to return? – John Machota, SportsDay

Will Randy Gregory be available on week one, or even at all in 2019 for the Cowboys?

The NFL announced in February that Cowboys defensive end Randy Gregory had been suspended indefinitely for violating the league’s substance abuse policy. It marked Gregory’s fourth suspension since being drafted by the Cowboys in the second round in 2015.

As of Friday, the Cowboys still aren’t sure how long his latest suspension will last or when he could potentially return.

”I think those things are tough things to get your hands around,” Cowboys executive vice president Stephen Jones told Pro Football Talk. “Obviously a lot of it depends on the player and how he’s progressing within the program. Certainly our understanding is that Randy is doing a really good job of getting things back on track. We all know with addiction, there’s no clear path in terms of you wake up and all of a sudden you’ve moved on from it. That’s part of the journey that someone like Randy takes.

”But we do understand that he’s doing well. But we don’t know one way or the other if and when we are going to get him back.”

TAKEAWAYS FROM WILL MCCLAY’S INTERVIEW ON THE DRAFT SHOW – Kevin Brady, Inside the Star

Will McClay joined “The Draft Show” podcast on Thursday to recap the Cowboys 2019 draft class. Here are some of the highlights from that hour-long sit down:

“Character” Plays A Big Role In Their Evaluation

He also gave two excellent examples of where football character shined through during draft visits in Jaylon Smith and Dak Prescott. Obviously both of these players have worked out great for the Cowboys, despite being gambles in their own right on draft day.

The Cowboys did not make the awards list, but the Giants sixth-overall pick did, and Cowboys fans should rejoice again!

Daniel Jones needs a hug. No first-round pick in the 2019 draft has been more universally panned than the Giants’ selection of the Duke signal-caller with the sixth overall pick. However, Jones insisted he hasn’t paid much attention to all the criticism during an appearance on SiriusXM NFL Radio’s “Late Hits” (h/t Giants.com’s Dan Salomone):

”I haven’t paid too much mind to that. I think that’s key to playing quarterback, to being consistent as a quarterback, is keeping your head in the same place. I think that just comes down to your confidence in yourself, and your confidence has got to come from inside of you. I think if you’re looking externally for confidence, then you’re also going to be affected by the negative as well. Just finding confidence in yourself and knowing what you can do as a player, as a person, is kind of the way that works and the best way to think about handling a lot of that stuff.”

Apparently, he’s spent the last week in a cave.

The Cowboys landed some impressive talent after the draft with their undrafted free agent signings. The offensive lineman in particular stood out to Bryan Broaddus of the mothership.

Hyatt was an All-American left tackle twice during his four-year career at Clemson.

Much like Allen, he has more athleticism than power. His feet work very well.

He stays after his block. You’ll see him do a nice job of securing his down block, then getting to the second level.

Speaking of his foot speed, he has the quickness to push rushers past the quarterback. He does an outstanding job of positioning himself in order to finish the block.

This is a hard guy to trick. He has the awareness to pass the stunts.

There are snaps where the lack of power/strength shows itself. He will get thrown on the ground, and I have seen him get walked back into the quarterback’s lap.

He doesn’t have the power to consistently make the inside cutoff block.

Good at working with his teammates on double-team blocks. Can get some movement this way.

Bottom line: he should have been drafted, but that lack of power was a concern for teams. Some scouts around the league felt like he never fully developed physically as a player despite being a four-year starter at Clemson.

Could the Cowboys look to trade for veteran TE Kyle Rudolph after failing to land one in the draft?

Dallas lured former All-Pro tight end Jason Witten out of retirement, which gives them experience but doesn’t promise to solve their problems. Instead, Witten is a band-aid replacement who was declining in 2017 and could be worse after a year away.

Not only that, but the 37-year old will be a progress stopper for Dalton Schultzand Blake Jarwin who had started to show signs of improving late last season.

However, the team still has options to improve the position — assuming they’re serious about upgrading. Recently, there have been rumors that the Vikings may be willing to move veteran Kyle Rudolph.

Jelks’ high school coach, Dan Hinds, thinks the Cowboys got a steal in the seventh round.

”I thought he would go higher in the draft, but he’ll get in there and work hard and do what it takes to make it,” Hinds said, per azcentral.com.

ESPN’s Mel Kiper feels the same way. Kiper believed that Jelks was a third or fourth round talent, but said the former Oregon Duck didn’t quite live up to expectations in Eugene.

”Jelks just never had the production that I think his talent indicated was possible,” Kiper said before the draft, per The Register-Guard. “He’s got length and he’ll flash, so I think he could end up in the third- or fourth-round mix.”