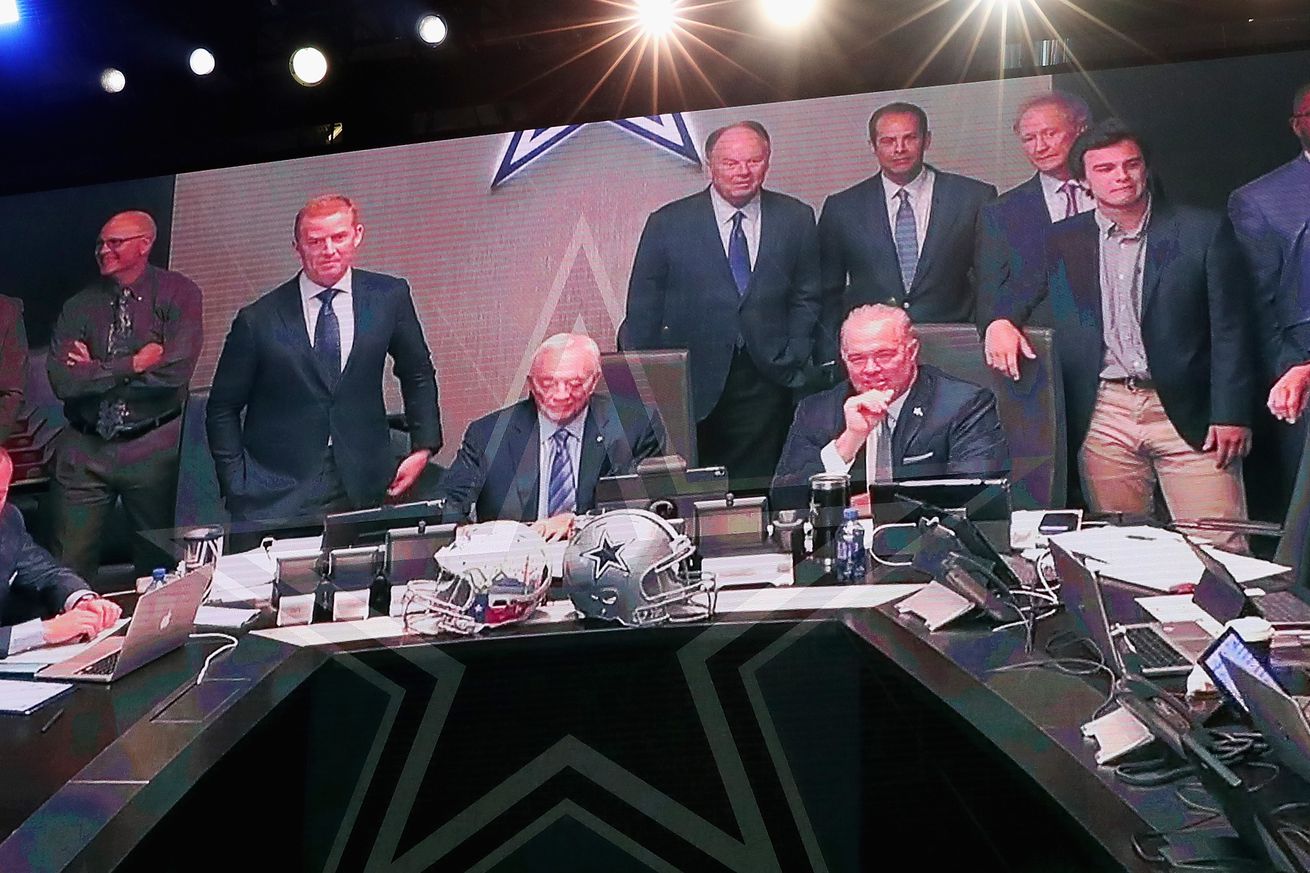 You ever want to know what goes on inside the Cowboys War Room. The mothership gives us a nice look, including how head coach Jason Garrett was advocating for another talented offensive lineman.

Best part of this is when the Cowboys are about to make their third-round pick, Penn State OL Connor McGovern

Stephen Jones double-checking with the group: “Do we like Connor?”

Will Cowboys Have Their Best OL Since 2016? – Mauricio Rodriguez, Inside the Star

The addition of McGovern means an already strong offensive line just got stronger.

One of the biggest question marks last year lied at left guard, where second-round rookie Connor Williams began his season struggling. He progressed throughout the year and once he had the opportunity to play under Marc Colombo, signs of promise were all over. With added weight prior to the upcoming season, Cowboys Nation should be confident in seeing a very improved version of Williams. La’el Collins is the other big question mark. Although his play has been above-average, he hasn’t really proved he’s worthy of a long-term contract.

With Williams’ versatility and Connor McGovern drafted in the third round, watch out for the Cowboys having a ton of options regarding the future at right tackle. With Frederick back and an improved Connor Williams, this unit should look a lot better. Zack Martin will, as always, be more than fine. Tyron Smith must stay healthy, but even if he doesn’t, the depth at the position is considerably better than in previous years.

Why Cowboys officials were unified in taking Trysten Hill in the second round of the NFL draft over a safety – David Moore, SportsDay

The Cowboys were so happy that Hill was available in the second round that they bypassed their plans to grab a safety. Why were they so enamored by the UCF defensive tackle?

A player talented enough to be taken in the second round of the NFL draft shouldn’t start the game on the sidelines for UCF. The Cowboys acknowledge the red flag, did their due diligence and say they’re comfortable. Defensive coordinator Rod Marinelli goes as far as to say that he and Hill have clicked.

The Cowboys didn’t ignore the input they got from Josh Heupel’s staff. But it’s fair to say the organization put more weight in what Scott Frost had to say. Frost, now the head coach at Nebraska, was UCF’s head coach for Hill’s first two seasons. Hill started all 26 games he played under Frost. He had good things to say about the defensive tackle. Was this a case of the Cowboys only wanting to hear the good about a player at a position they value? No. Frost spent six years in the NFL as a safety before becoming a coach. His last stop was Tampa Bay in 2003. The assistant head coach on that team over defense was Marinelli. Frost knows how Marinelli operates and what he demands from players. He knows what makes Hill tick. If Frost was unsure that the two could co-exist, do you think the Cowboys would have used a second-round pick on Hill?

Even thought Richard would love to have a new talent for his position group, he understands that it all starts in the trenches.

Many assumed the team would choose a starting-caliber safety with their first pick. Speaking with 105.3 The Fan on Thursday, Broaddus confirmed it was actually defensive backs coach Kris Richard who pressed the war room to go in a different direction by selecting depth on the defensive line in Trysten Hill of Central Florida.

“This is going to be on Kris Richard,” Broaddus said. “This is Kris Richard going, ‘If we don’t have defensive linemen, my safeties aren’t gonna mean a damn.’ I’m using my words there. But Kris went into the room and basically explained. This is where you have to have coaches that really understand the draft and understand team building.”

What Every NFL Team’s Rookie Class Must Accomplish in 2019 – Brent Sobleski, Bleacher Report

The Cowboys may have surprised people with their Day 2 picks, but both players add some strength in the trenches.

Provide Reinforcements to the Fronts

The Dallas Cowboys didn’t own a first-round pick thanks to the Amari Cooper trade. Instead, the front office decided the defensive and offensive lines required later-round reinforcements. ”That’s where you want to be strong, on the fronts,” executive vice president Stephen Jones said, per ESPN.com’s Todd Archer. “… That’s where we want to dominate. And if you can dominate those fronts, then good things happen.” Dallas drafted an ideal 3-technique for Rod Marinelli’s system in this year’s 58th overall pick, Trysten Hill. The 308-pound defensive lineman shows an explosive first step and relentless approach. Hill can help offset David Irving’s retirement. On offense, rookie Connor McGovern will back up all three interior spots. Travis Frederick is expected back at center, but the team now has more depth if Frederick’s health becomes an issue or Connor Williams struggles during his sophomore campaign.

New Cowboys cornerback Michael Jackson has potential beyond where he was drafted – David Howman, Blogging The Boys

The Cowboys new cornerback is really good at one thing and as luck would have it, that’s exactly why he was brought to Dallas.

Standing at 6’1” and 210 pounds, Jackson has 32 1/2” arms, which basically makes him the ideal Kris Richard corner. His 4.45 40-yard dash was tied for eighth best among corners at the combine, and his performance in explosiveness tests – a 130” vertical jump and 40.5” broad jump – both ranked fourth at his position.

Jackson needs to play press-man coverage in order to properly illustrate his strengths.”

And therein lies the fit with the Cowboys. Jackson is a big, long, strong corner who excels in press coverage. His physicality at the line of scrimmage helps to hide his average agility, and that plays well into the style that Richard has his defensive backs play. By coming to Dallas, Jackson will be asked to almost exclusively do the thing he does best. And when he does that one thing, he does it very well. Check out this nugget from Pro Football Focus:

Jackson was most targeted on Go Routes last season. On Go Routes, he allowed 5 receptions on 18 targets for 118 yds, 0 TDs, and a 54.4 passer rating. #CowboysNation pic.twitter.com/LGDLIWSgPr

Six Cowboys UDFA prospects that are sure to push for a roster spot – Michael Sisemore, Blogging The Boys

Westry has all the physical gifts that you want in an NFL cornerback. He’s long and has tremendous athleticism. Westry does a nice job of staying physical with receivers and has a tendency to wear the opponent down. He is a solid tackler, he wraps guys up but sometimes his physicality becomes overaggressive. He’ll need to lose that habit he has to grab receivers to make it in the NFL and he’s likely to hear his name called quite a bit in preseason. The traits mixed with his physical makeup make him a great candidate for Kris Richard’s development program.

The Cowboys always sign a defensive end in free agency that appeases the fans, but then never really materialize. Damontre Moore and Kony Ealy are a couple recent ones, and this year it could be former Lion Kerry Hyder.

Hyder saw Dallas add Robert Quinn in free agency to start at the right end and they picked up Joe Jackson and Jalen Jelks in free agency as well. There’s also still Tyrone Crawford, Taco Charlton, Dorance Armstrong, and eventually Randy Gregory (maybe). What could help him will be his ability to move inside on third downs, much like Crawford is able to do. The coaches love that kind of versatility, which is a huge plus, but it still won’t be easy.

Stock Up, Stock Down for Every NFL Team This Offseason – Chris Roling, Bleacher Report

Bleacher Report provides a stock status report of each NFL team. What direction are the Cowboys trending?

The Cowboys didn’t need to make massive additions like they did over the course of the past year after adding Leighton Vander Esch to the heart of the defense and Amari Cooper to Dak Prescott’s arsenal. Yet quietly, the team got Jason Witten back out of retirement and took care of business with star pass-rusher Demarcus Lawrence. Robert Quinn came over via trade to deepen the pressure-creating unit, too.

During the draft, Trysten Hill was the Cowboys’ first pick in the second round and functions as the David Irving replacement. The remaining picks were depth at good value, so sort of like the Browns, the only thing that appears ready to contain the Cowboys is themselves.

What will be atop the Cowboys priority list next year? It shouldn’t look much different than this year.

Somehow, Jeff Heath emerged from the 2019 offseason with a shot at being a starter yet again. The club added George Iloka in free agency, but whether he’s capable of being a starting player is up in the air. Both are free agents after the year, as is Kavon Frazier. Sixth-round pick Donovan Wilson seems like the type of safety Kris Richard could mold into something, and cannot be counted out but also cannot be penciled in to be much of anything yet. Dallas could be looking at safety despite how they obviously despise allocating resources to the backend of their defense.