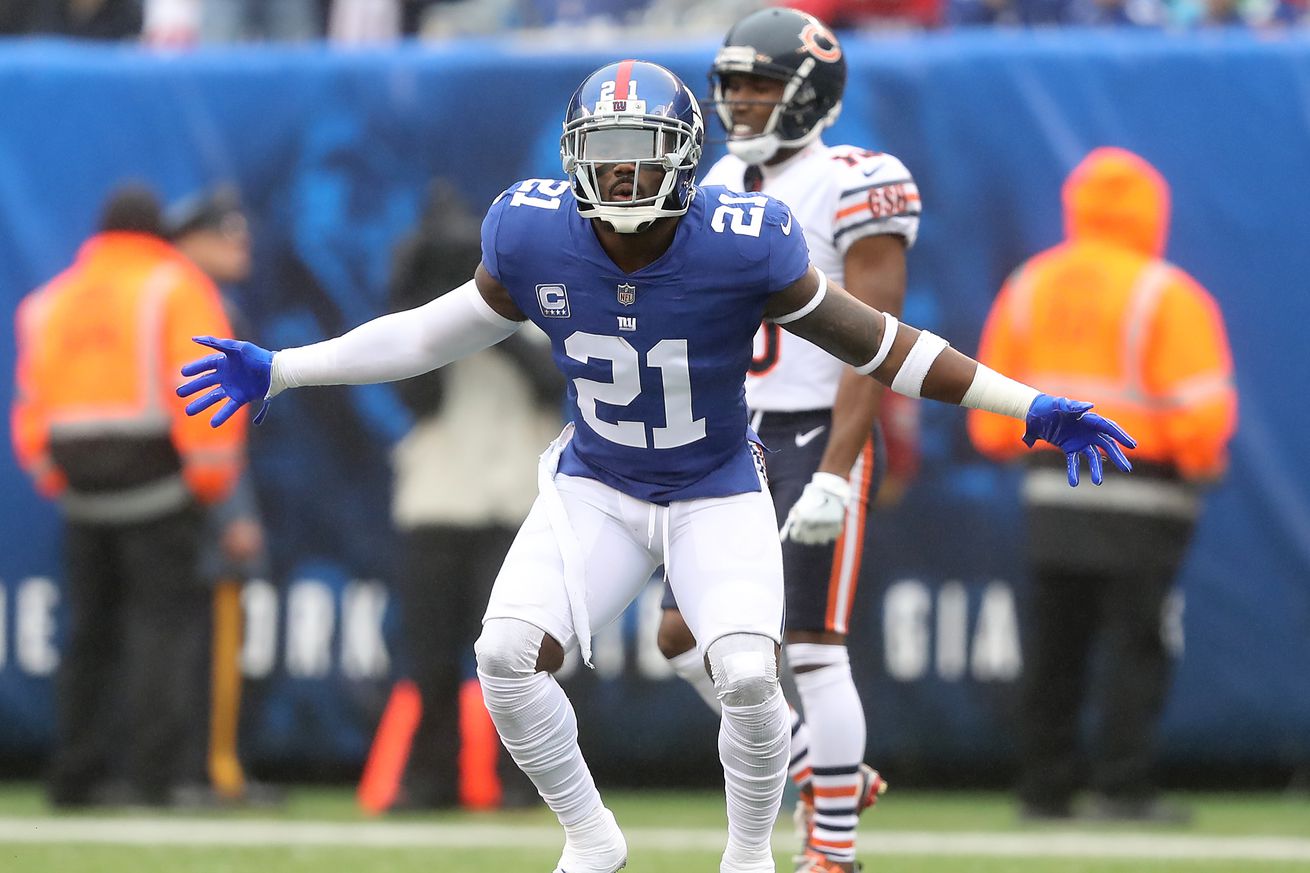 A lot has happened this offseason, but how do these teams stack up?

The NFL Draft is over. Free agency, for all intents and purposes, is over. There are bound to be more transactions before the season begins, but most of the big splash moves are over and done with. Teams will now take what they have into training camp and begin the process of formulating their 2019 roster. It’s been a busy offseason for all of the NFC East teams. We’ve seen some pricey free agent signings, big-time trades, and tough decisions to part ways with some key players. It certainly wasn’t boring.

But what does all the moving and shaking mean for the upcoming season? Which team has done the most to bolster their roster? Which team has taken the biggest hit when it comes to losing important pieces? And which team has the most overall talent after all these changes have gone down? Let’s take a look at some of the key moves each NFC East team has made and try to put a value to them. For this exercise, we are going to use Approximate Value scores from NFL Reference to assign each player a seasonal value. Each players value is based on what they received last season, however the scores are prorated over a full 16 games to compare apples to apples. Since we are trying to look at the value of what these players offer going forward, players whose scores were affected by games missed won’t be penalized when evaluating a fresh new season.

[Note: Not all players are mentioned. Players with AV scores that are low enough to be just another guy are disregarded. For example, new Cowboys safety George Iloka may very well help the team, but based on his most recent AV score, it will be assumed that his impact is negligible.]

The Philadelphia Eagles always love to go after new blood and that’s exactly what they did. DeSean Jackson returns to the team that drafted him. The added former Jacksonville Jaguars DT Malik Jackson to strengthen the interior defensive line. And they made a trade with the Chicago Bears to get Jordan Howard to help their running back group. Howard is on the last year of his rookie deal.

While Cowboys fans have been relatively pleased with the acquisition of Robert Quinn and Randall Cobb, the Eagles’ moves scored out twice as good in terms of approximate values, mainly due to volume. All three of the Cowboys division rivals have done more to bolster their roster, which Philadelphia being the team that has added the most new talent.

The Cowboys just sat back and watched their divisional piranhas feed off each other. The Redskins stole Landon Collins from the Giants. The Giants stole Golden Tate from the Eagles, and then the Eagles just recently stole Zach Brown from the Redskins. While Dallas didn’t gain nearly as much as their NFC East counterparts, they didn’t lose much either. In fact, the damage is relatively mild in contrast to the other teams.

The Giants took a big hit with some of their top stars in Odell Beckham Jr. and Olivier Vernon being dealt to the Cleveland Browns. They also traded Damon Harrison to the Detroit Lions to get out from his contract as well as letting All-Pro safety Landon Collins walk in free agency.

The Eagles lost a lot as well, but the most recognizable hit comes from Nick Foles, but if Carson Wentz returns to form and stays healthy, the loss of Foles won’t matter much. Even still, the Eagles lost a few good players. Golden Tate’s stay didn’t last long, but he is a very underrated receiver who gets open on a regular basis. And the loss of Jordan Hicks might sting more than some Eagles fans are willing to admit as he had the same tackle/sack per game contribution as the Cowboys Jaylon Smith. And Michael Bennett’s nine sacks in 2018 will be missed.

The Redskins didn’t lose any big time players, but they lost five solid contributors and all of that adds up. Washington shook things up at safety with the departures of both D.J. Swearinger and Ha Ha Clinton-Dix. Pass rusher Preston Smith was selected 38th overall in 2015 and has had two seasons with eight sacks, but he signed a four-year, $52 million deal with the Green Bay Packers.

The Cowboys basically lost Cole Beasley and that’s it. Geoff Swaim shows up barely because he did contribute a little before he got hurt, but most of the players not returning to the team are essentially non-factors. Of course, all this changes drastically if the Cowboys weren’t able to retain All-Pro defensive edge DeMarcus Lawrence.

Not surprising, the Cowboys and Eagles have the most talent in terms of players returning in 2019. The Cowboys have eight players with an approximate value of 10 or more, whereas the Redskins only have one player in double digits – Ryan Kerrigan. Both Dallas and Philadelphia are top heavy in talent, but also have a lot of good players spread out all over the roster. This speaks to how well both organizations have done building their roster.

So, when we add the new players to the current roster, where does each team stand?

The picture painted here is that the Cowboys and Eagles should once again fight it out for the NFC East crown, where the Giants and Redskins have a lot of catching up to do. And that’s what they were hoping to do in the draft. Here is each team’s draft haul through the first three rounds of the draft:

[Note: only premium picks were included since there is significant evidence showing that Day 3 rookies add very little value in terms of AV scores.]

The Cowboys got out-drafted… at least that’s what it looks like right now. Of course, that sorta thing is expected to happen when their divisional counterparts have a lot more draft capital at their disposal.

The Giants managed to get three first-round players, while the Redskins snagged two. Even the Eagles pulled off two second-round picks. Meanwhile, the Cowboys were not participants on Day 1 and picked late in both rounds on Day 2. And while their division rivals started with a big head start, combining for six total first-round picks, each of the teams also had to sit out a round. The Redskins and Giants both didn’t have a second-round pick and the Eagles didn’t pick in the third round.

We won’t know the outcome of this draft haul until much later, but on paper, the NFC East teams made up some ground with more resources being thrown at young players.

So, what does this all mean?

The Giants are paying the price for trying to take shortcuts in free agency during the 2016 season. After making it to the wild card game that year, they’ve since finished in last place in the division in each of the last two seasons. They have now basically waved the white flag and sold off their stars in hopes of rebuilding through the draft. That’s a noble strategy, but until they start drafting better, this team will continue to spin it’s wheels.

The Redskins have done a decent job putting pieces together, particularly on defense, but they only go as far as their quarterback goes. And after transitioning from Robert Griffin III to Kirk Cousins to Alex Smith to now Case Keenum/Dwayne Haskins – it’s back to square one for them. They still have some good players with some great draft picks along the defensive line over the last couple years, but they have a ways to go to shore up the depth of their roster.

The Eagles are always active. In a way, they are like the the old Jerry Jones. Right, wrong, or indifferent – they’re always doing stuff. Some of it blows up in their face, some of it wins them a Super Bowl. With many good players on the roster, the Eagles are going to be good, but the question is – how good can they be? All that rests on the shoulders (or knee? or back?) of their young quarterback, Carson Wentz. It remains a mystery of what that all means with the range of awesomeness being really wide for this team. Wentz was flat out tearing it up in 2017 before he tore his ACL, but then looked very unimpressive last season. Eagles fans are hoping he can just chalk that up to bad health and that better days are coming.

The Cowboys have a lot of good players so it has to feel good sitting where they’re at. They are a young team and still have a lot of money to spend over the next several years, however – all that will change once they get some of their younger stars into second contracts. With a team that is much improved, it’s harder to get excited about new rookies coming in and dethroning the incumbents, but that’s okay. The Cowboys are a patient organization and while they didn’t sell out for the upcoming season, everything they do is sustainable for the near future. They will be great now and they will be great later, but what everyone wants to know – when will they be Super? That time may be closer than we think.