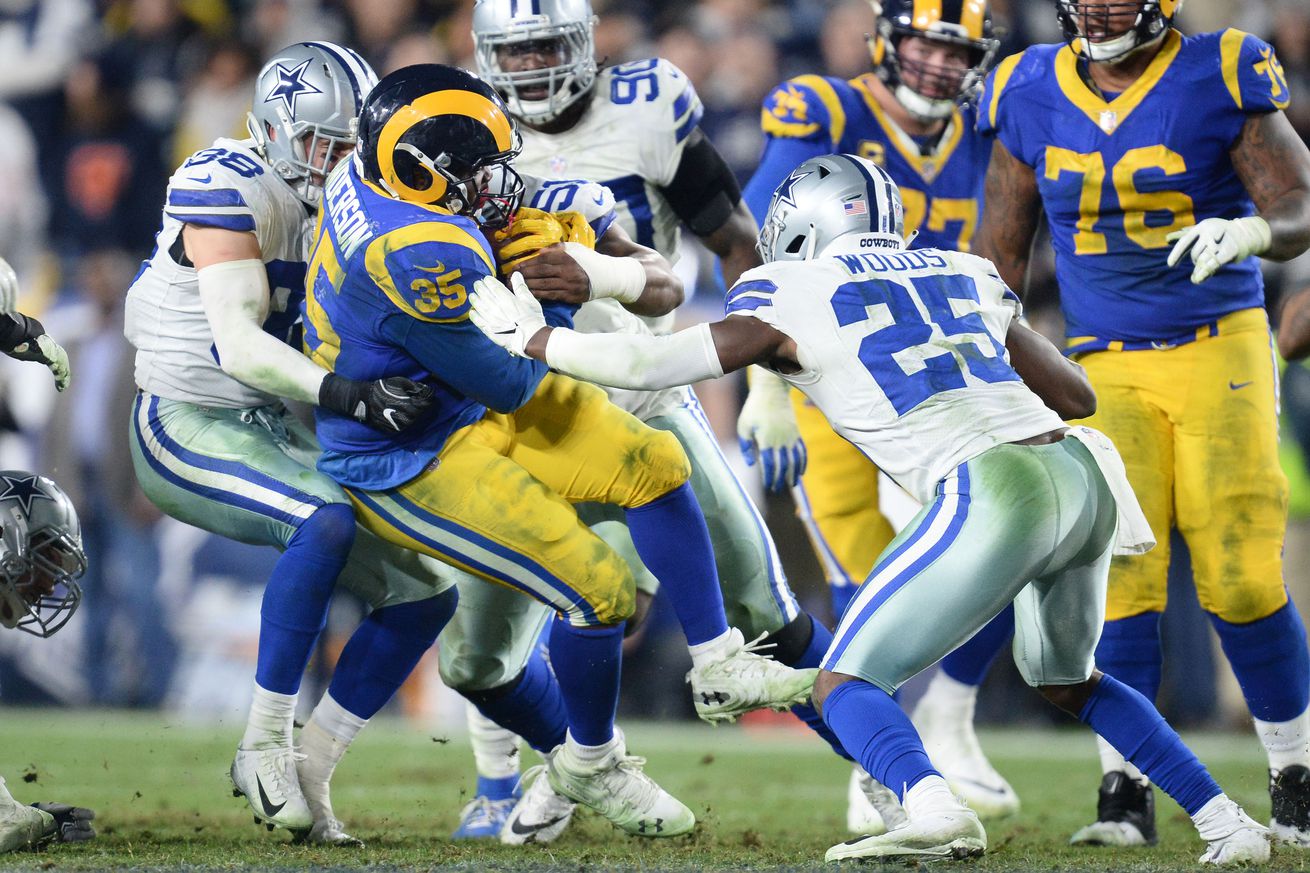 Teams have called about safety trade bait but Cowboys are content for now.

Team has fielded trade requests since draft but content with what they have at safety- Clarence Hill- Fort Worth Star-Telegram
VP Stephen Jones said he doesn’t feel like safety is an area for the Cowboys to explore trading for right now.

“I think it’s hard to think anybody is going to upgrade us there,” Jones said. “And not just anybody fits in what we are trying as an organization to get accomplished at that position. A lot of people say there is this safety and that safety, it has to be a safety that works for us. We will just continue to work through that. We are not going to be in any hurry. We are comfortable with the guys we have. We know we can go out there and play really good defense with the guys we have. And it’s going to be interesting to see how some of these new guys compete with the older group.“

Cowboys’ Jeff Heath sees competition at safety as opportunity to get better -Tyler Dragon- SportsDay
Jeff Heath hears the calls for his replacement as the starting strong safety but he’s ready for the opportunity to earn his spot again.

Position of need, weakness of the Cowboys’ defense or the team’s top draft priority — Jeff Heath realizes there were persistent pleas for Dallas to upgrade the safety position this offseason. Yet, Heath is not going to let it affect his mindset as he prepares for his seventh year.

Heath was a guest on ESPN Dallas 103.3 [KESN-FM] this week and he discussed his mentality in the midst of calls for his demotion.

”I feel the same that I do every year. Regardless of what other safeties are there. I’ve kind of accepted in this league they are always trying to replace you (and) they are always looking at new guys, Heath said on ESPN Dallas 103.3 [KESN-FM]. “So that’s going to be something that not only myself, but everyone deals with on a yearly basis.”

5 key camp battles that will shape Cowboys roster in 2019- C.C. Boorman- CowboysWire
A look at five crucial roster spot battles on the horizon for the Dallas Cowboys.

Despite spending a significant amount of time and energy examining the safety crop in both free agency and the draft, Dallas elected to punt and enter the offseason without a significant addition to their safety corps. The recent rumors of a trade acquisition appear to be falling on deaf ears as the brain trust is content in having Heath with only one major challenger in journeyman George Iloka. The staff has expressed confidence in Iloka’s ability to play in the box as well as handling intermediate zone coverages. His modest salary seems more of a fit backing up both safety spots as opposed to being given an honest opportunity to unseat Heath.

Injuries have kept him from being the Eric Berry we all know and love, but he’s too talented when healthy to remain unsigned. In 2016, Berry earned an 89.9 overall grade across 1,151 defensive snaps in Kansas City.

The Cowboys have been rumored to be in the mix for a number of safeties throughout the offseason, and they eventually brought in George Iloka to compete for a roster spot. Berry would be an immediate upgrade at the position, and he would provide an influx of veteran leadership among a defensive back unit filled with youthful playmakers.

What did he learn about life in the NFL in his first season?

Vander Esch: ”I think I learned the more simple on yourself that you can make it and not worry about things that are out of your control, the easier it’s gonna be on yourself. Simplifying your life and balancing it. That’s really the hardest thing that you can do. If you can master that and you can get that down, it makes your life easy. And then, you can just pretty much show up every single day at work and enjoy it, have fun and play football.

”I didn’t wake up one day last year feeling like ‘man I got to go to practice today.’ I was like ‘I worked for this my entire life’ and I walked in with a smile on my face every single morning.”

Vander Esch: ”I’m looking forward to seeing what we can do even further and more this coming season…Everyone is getting better and I know in our minds and listening to the coaches we realize what we can really truly be this year. Now that we have a stone set in place from last year. We can really take it to the next level now.”

Will McClay on Amari Cooper Plan: Cowboys concession on what ‘didn’t work’- Mike Fisher- 247SPORTS
Will McClay is not nearly as committed to things when they aren’t working, something he spent time explaining to Jason Garrett & the Jones’ family.

“We went into last year (doing) receiver-by-committee,’’ McClay recently told “The Draft Show’’ on DallasCowboys.com. “We brought these guys in, you know there were injuries, you know, there was that. (But) the plan didn’t work. …’’

To the organization’s credit, when a 3-4 start established that the decision wasn’t quite working, Dallas engineered a trade with Oakland for Amari Cooper — and “receiver-by-committee’’ was dead.

”If you put your head in the sand and say ‘OK we’re gonna, you know, somehow, some way rectify it …,’’ McClay said, essentially saying that sometimes to rectify a decision is to un-do it.

Is Cowboys rookie class ‘who we thought they were?’ Minicamp first step in answering that question-David Moore- SportsDay
Cowboys will get their first glimpses of the rookie class in upcoming rookie minicamp.

While officially billed as a rookie minicamp, it’s more of an orientation. The players will take the field Friday and Saturday for two separate sessions. There’s another session on Sunday. The rookies join the veterans in the club’s offseason program beginning next week.

Garrett has modified his approach since presiding over his first rookie class as head coach eight years ago.

”We’ve done it a lot of different ways through the years,’’ Garrett said. “Certain years we’ve just had the draft class and the free agent class come in. Other years we’ve used it as an opportunity to have a lot of tryout guys and have a chance to look at more people, more of a practice-like atmosphere.

The Cowboys probably will give Dak Prescott a huge new contract, but is he worth it? -Matt Bonesteel- The Washington Post
Different statistics paint different pictures of what Dak Prescott has been for the Cowboys but he’s going to get paid top dollar.

Prescott also was impressive in the postseason earlier this year, leading Dallas to a win over the Seahawks and helping Dallas keep things close in a loss to the Super Bowl-bound Rams. He rushed for a touchdown in both games and only had one interception.

But the advanced quarterback metrics compiled by Football Outsiders paint a different, less-rosy picture of Prescott’s play over his career. Here are his NFL rankings in three fancy stats over his career.

The following quarterbacks put up better numbers than Prescott in all three metrics last year: Andy Dalton, Mitchell Trubisky, Jameis Winston, Ryan Fitzpatrick and Kirk Cousins. Eli Manning and Joe Flacco, perhaps the two most-maligned starting quarterbacks in the league last year, were superior to Prescott in both DYAR and DVOA. But when you’re a quarterback — even just an average quarterback, as Prescott was in 2018 — and you’ve led the Cowboys to only their third postseason victory since 1996, team executives named Jones can overlook that.

Rob: It’s hard to speculate because those discussions are kept in-house, and contract talks are usually fluid. We do know that Russell Wilson (Seattle) and Ben Roethlisberger (Steelers) have sort of reset the market in the $34/35 million per year range. Cowboys COO Stephen Jones has said repeatedly that Prescott and other stars (Amari Cooper, Ezekiel Elliott) deserve to be paid very well, but the team also wants to make the best deals they can to ensure they can field a full championship-level roster.

Cowboys Stephen Jones tries selling players on not taking “max” contracts, players not hearing that – Dave Halprin-Blogging The Boys
The Cowboys VP tries to sell the communal thing, but players want to get paid.

In the abstract that sounds like a good idea. Don’t take every dollar you can and we can build a better team. Plus, we’re the Cowboys so if we’re successful you will make money through endorsements and you will have a big career after you leave the game. There is truth in what Jones is saying.

Unfortunately for him and the organization, the players are not exactly buying the argument. And there is no reason they should have to if they so choose. They are putting their bodies and mind at risk, careers can change in an instant, and getting paid the most you can, while you can, is a solid strategy.