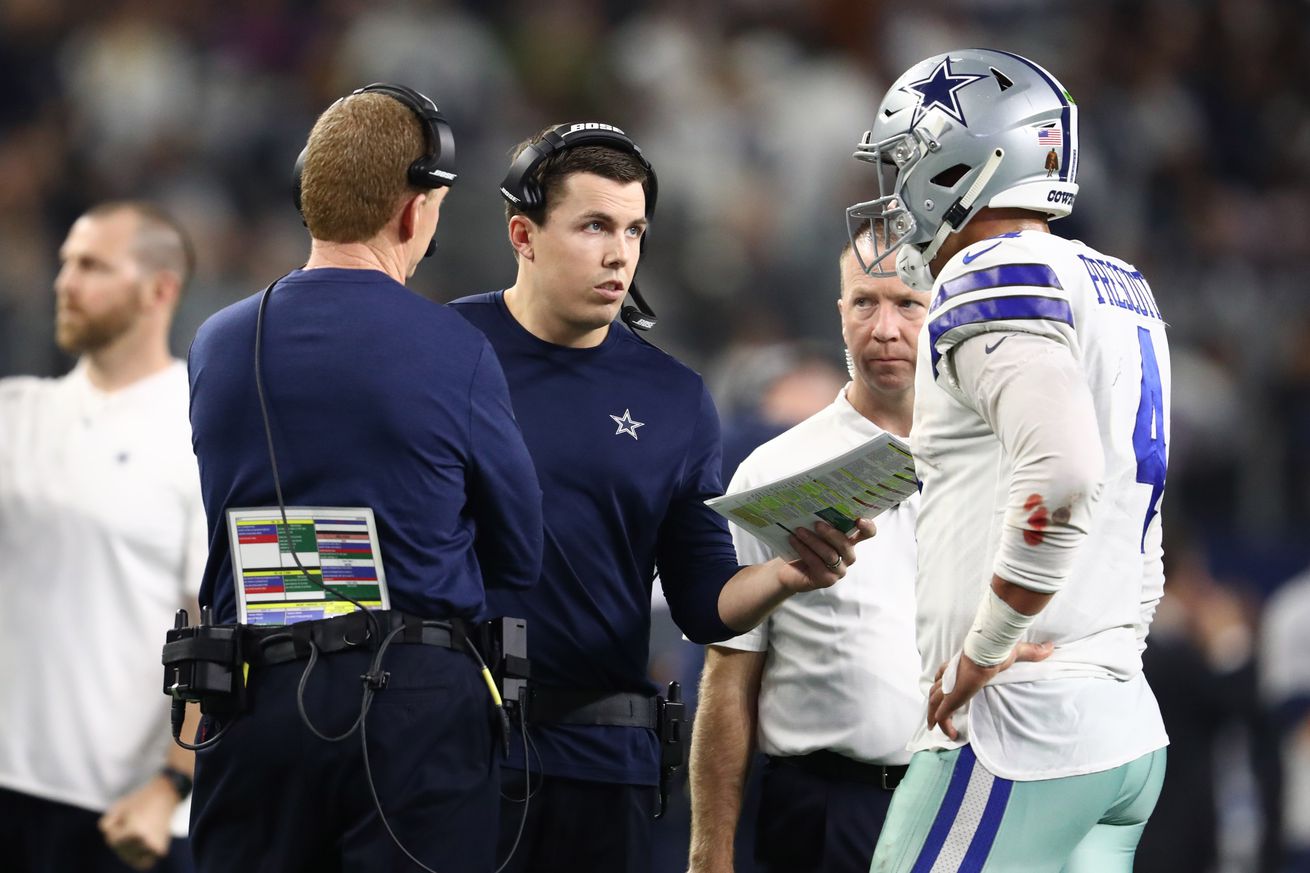 Here’s what really held the 2018 Cowboys back, and what Kellen Moore’s 2019 offense must solve – Bob Sturm, The Athletic
Another deep dive from the Sturminator into the single biggest challenge facing new offensive coordinator Kellen Moore.

A branch off the red-zone tree makes them look even worse: No team (32nd) was more inefficient at scoring touchdowns after a first-and-goal than the Dallas Cowboys.

You mean to tell me with this running back and this offensive line (not to mention Prescott and Cooper) Dallas can’t punch in a first-and-goal? The Cowboys scored touchdowns after 52% of first-and-goals. The Saints led the league at 85%. Do you know how many points that accounts for? Seven different NFL teams were over 80% in this category! Minnesota was 19th in the league, and their rate was 75%!

If league average is 76% and you sat at 52% in a scenario you encounter at least 25 times per season, that means you left between six and eight touchdowns on the field last year. Let’s meet in the middle and call it seven. Since the Cowboys were so bad here, we can easily suggest that they kicked six field goals for 18 points, with the last attempt including a stopped fourth down or takeaway. That is a 31 point difference, roughly two points per game. Two points per game would vault a team from the 22nd-best scoring offense (where they finished the year) to about the 15th-best without changing a single other thing.

That illustrates how vital it is to be efficient in the red zone and inside the 10. You must take your chances and make them count. Yes, the Cowboys need a more explosive and diverse attack and that is being addressed in a number of ways. But the clearest and most obvious reason Scott Linehan was fired was that this offense was better at scoring from midfield than it was at scoring from the eight-yard line. And that is what Kellen Moore has been tasked with fixing.

The solution could be as simple as some minor tweaks combined with a new weapon in rookie running back Tony Pollard and the return of veteran Pro Bowlers Travis Frederick and Jason Witten.

”I think the beauty of our current roster is we have a lot of versatility,” Moore said. “We have guys that can kind of line up in a lot of different places.

”Hopefully we can be multiple and present things in different ways, and at the end of the day, still have our foundation and our philosophy. You can run similar plays, just out of a lot of different looks.”

And something that has the players most excited is the belief that Moore will be open to utilizing some of their suggestions.

”At the end of the day, work together with everyone,” Moore said. “I think that includes the coaching staff, obviously coach Garrett and the rest of the staff. I think you also got to get some input from the players. It doesn’t mean you have to go down those roads all the time, but I think it’s important that when a player believes in something and they’re pretty [convinced] on it, usually they find a way to make it work.

”I think it’s a collaborative effort. It includes everyone. That’s part of this thing. We just got to get on the field together and start doing stuff, and then things evolve and take it where you want to take it at that point.”

NFC East projected starters: First-round QBs must bide their time – Gregg Rosenthal, NFL.com
Come for the lists of projected NFC East starters; stay for the insights into each team’s roster.

» Kellen Moore has gone from Dak Prescott’s teammate to quarterbacks coach to offensive coordinator in a three-year span. That familiarity makes him uniquely suited to building an offense tailored to Prescott’s strengths.

» The receiver spots are fairly wide open after Amari Cooper. Michael Gallup will compete outside with Allen Hurns, who is coming off a serious injury. Randall Cobb will battle for snaps in the slot with Hurns, Tavon Austin and Lance Lenoir. If Cobb doesn’t look great in camp, the Cowboys might want to add another veteran.

» It was surprising to see the Cowboys pass on taking a tight end in the draft. With Blake Jarwin as the backup, it’s basically Jason Witten or bust.

» Travis Frederick’s return from Guillain-Barre syndrome has gone according to plan, and the Cowboys expect him to play in 2019. His recovery, however, is an unknown — the drafting of Connor McGovern gives the team a backup option. It is an unfair responsibility, considering what Frederick has been through, but he is the key to bringing Dallas’ line back to its previous heights.

FMIA: The 2019 NFL Power Rankings, Taking Stock of Offseason Movement – Peter King, ProFootballTalk
Catch up on all the goings-on in the NFL from Peter King, including has post-draft rankings (where he’s not impressed with the Cowboys’ off-season, ranking the team 16th overall).

Best news of the offseason for the Cowboys, easily, didn’t come in free agency (through re-signing pass-rusher DeMarcus Lawrence for five years was big) or the draft. It came on the field in the last few weeks, when the Cowboys have seen the best center in football, Travis Frederick, return to form after missing 2018 with an autoimmune disorder that attacked his nervous system and left him feeling weak for months. “He looks really good,” said coach Jason Garrett. “It’s good to see him out there in a stance, running football plays.” In 2017, with Frederick as the linchpin, Dallas had the best line in the NFC. The Cowboys can reclaim that if Frederick’s back whole.

Kitna Says Dak Already Has ‘Mindset To Be Elite’ – Nick Eatman, DallasCowboys.com
The Cowboys shiny new quarterback coach, like others members of the staff and front office, believe Dak Prescott has what it takes to be an elite player in the NFL.

When Jason Garrett was called into action midway through the 2010 season to become the interim head coach of the Cowboys, his quarterback was veteran Jon Kitna.

And young Dak Prescott was just a 17-year-old in high school.

Fast forward nearly nine full years and it’s now Kitna who is a rookie assistant coach in the NFL, joining Garrett’s staff as the quarterbacks coach. And while he has several goals, there’s one that seems to stand out more than others:

Get Prescott to an elite status.

If that can happen, the Cowboys certainly have a chance to be an elite team as well, especially considering they advanced to the NFC Divisional round last year after a 10-6 regular-season record.

Kitna, a 16-year NFL veteran who played two seasons with the Cowboys, said he believes Prescott is on the right track in reaching that goal.

Beware The ‘Gadget Guy’ Label With Tony Pollard – Rob Phillips, DallasCowboys.com
OTAs (organized team activities) have barely started but already new Cowboys’ running back Tony Pollard is generating expectations among those close to the team, including Pollard himself.

“I wouldn’t just compare myself to him, but I would say me and him are similar in ways that we play,” he said. “Just being able to do more than one thing: line up in the backfield at running back, mismatches with linebackers, running routes out of the backfield and making plays on special teams.

“They really like my running back aspect part of the game. But they also know it would be limiting me just to be a running back. So they said they would do a good job of just using me all over the field.”

Tony Romo fails to qualify for U.S. Open – Ryan Young, YahooSports.com
Tony Romo has always been an NFL quarterback who also played golf; or was it a golfer who also played quarterback? Either way, he continues to take stabs at the PGA but again came up short.

It’s been a rough week of golf for Tony Romo.

The former Dallas Cowboys quarterback — who did not make the cut at the AT&T Byron Nelson on Friday — failed to advance through the first round of his local U.S. Open qualifier on Monday.

Romo, who competed with 132 others for just eight spots, fired a 3-over-74 at TPC Craig Ranch in McKinney, Texas — missing the mark by just four strokes.

Romo has attempted multiple times to qualify for the U.S. Open in the past. He advanced through the first round in 2010 — while he was playing for the Cowboys — though withdrew from the sectional. He shot a 5-over 77 last year during his qualifying round, and failed to make the cut.

Cowboys rookie on how he became New England Patriots fan. – Jori Epstein, USAToday.com
Find out how a childhood accident led Cowboys’ 3rd round draft pick Connor McGovern to adopt the hated Patriots as his favorite team. That didn’t stop him from admiring what the Cowboys were doing, however.

McGovern didn’t adopt a new NFL team for that head injury. Instead, he’d wait until his Penn State days to latch on to a new pro team. McGovern came to admire the Cowboys offensive line as he watched the unit’s film during Nittany Lions days. McGovern started 35 of 39 games in three seasons at Penn State, including all 13 games each of the last two seasons. He moved from center to right guard in 2018.

“Once I got to college, I kind of fell out, didn’t watch as much football,” McGovern said. “While I was there, the offensive line we always watched the Cowboys line because the chemistry aspect of how they always did everything the right way. We tried to model our game after that. So I kind of ended up to be a fan of the Cowboys, too, through the offensive line.”