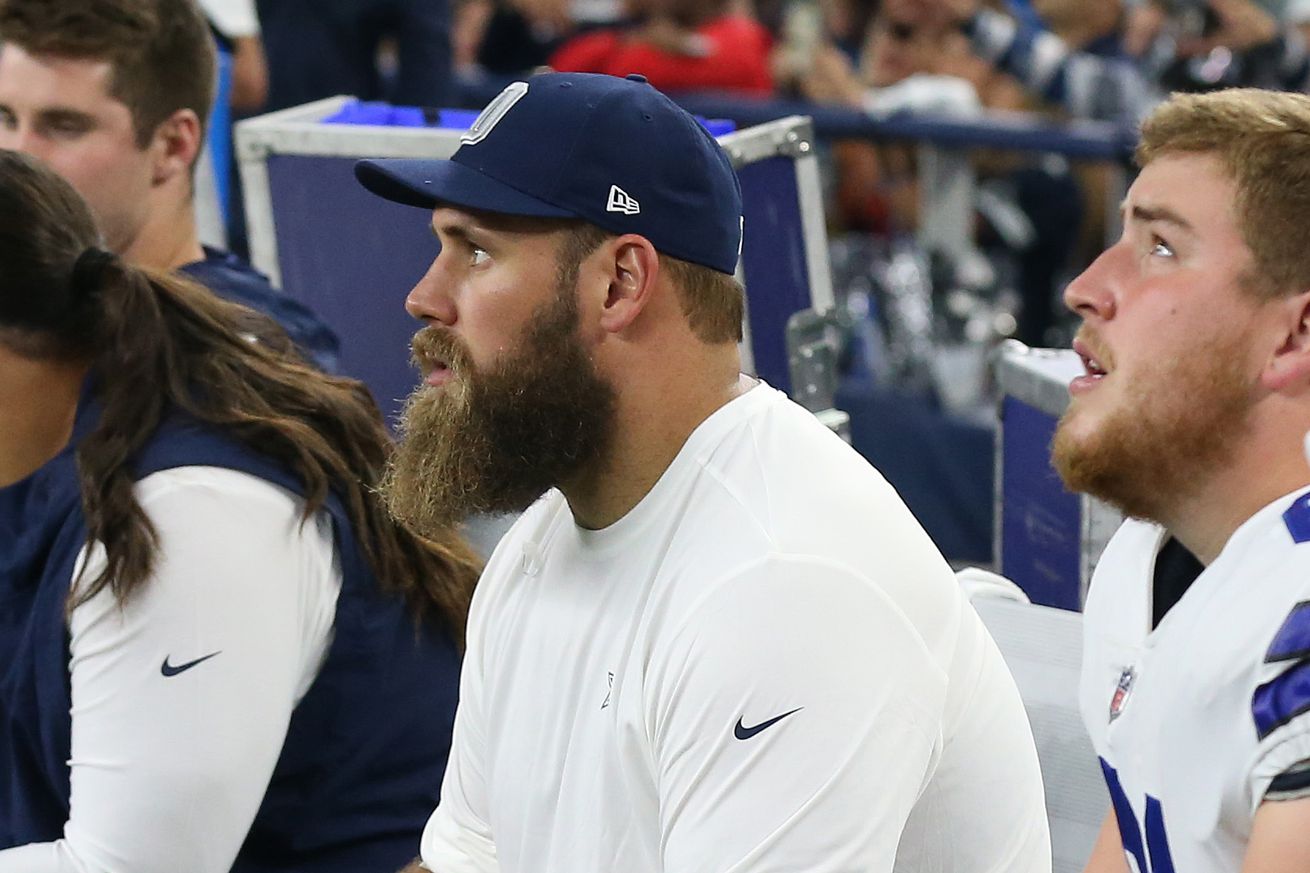 Plus a retired Dallas great takes the next step in his life.

A Glimpse Into New OC Kellen Moore’s Mindset – Rob Phillips, DallasCowboys.com
Hopes for a successful 2019 season are somewhat dependent on the idea that Kellen Moore can bring some fresh ideas to the offense. If you are on board with that, this should warm the cockles of your heart. (No, I don’t know what that really means, either.)

“We’ve got guys who can kind of line up in a lot of different places,” he said. “All of our running backs, from Maze (Jamize Olawale) being the fullback, what he did in Oakland when he kind of moved around a lot, Zeke’s got tremendous hands and he can do a lot of things, and we drafted Tony (Pollard) for a reason. (Seventh-round pick) Mike (Weber) can catch it as well and he can line up in spots. And all of our receivers are versatile guys. You go back to when Randall (Cobb) was in Green Bay, he lined up in a lot of spots.

“So we like the versatility of group, that hopefully we can be multiple and present things in different ways and at the end of the day still have our foundation, our philosophy. You can run similar plays out of a lot of different looks.”

And the more they speak with the media about their plans and ideas for the Cowboys offense, the more their smarts shine through. Moore has talked about keeping the defense on their toes with pre-snap motion and different looks/formations. Running the same set of plays but with the window dressing around it to confuse and complicate things for defenders.

Jon Kitna has talked about how impressed he is with Dak Prescott’s mindset and work ethic, speaking to specific areas in which he feels his ability as a coach will improve the young quarterback’s game.

Dallas Cowboys: Taco Charlton has minor ankle surgery | Clarence Hill, Jr., Fort Worth Star-Telegram
Taco Charlton just had his second surgery of the offseason, which doesn’t make things any easier for him as he is still trying to prove he was worth that first round pick. Will McClay certainly sounds like there is limited patience for him to turn things around.

So Charlton needs to return from this surgery ready to play the best football of his career or he could possibly face being a cut-down casualty or trade bait. The Cowboys are not going to hold the train for him, according to scouting director Will McClay.

“I’m expecting Taco to strap on his pads, put on his helmet and go out there and compete every day to prove that he belongs on this roster,” McClay recently said of Charlton on 103.3FM ESPN. “The injury and all those things, he’s going to have to overcome that and be available. I expect Taco to put his best foot forward and battle and compete for a spot, but you know what? We’re not going to hold the train for anybody.

“If you want to compete and roll with us, here it is. Everybody is going to have that opportunity. I expect Taco to be a much better player and a much more productive player. He was turning the corner last year. Injuries happen, and all that other stuff. I expect him to go and battle and compete. If him or anybody else isn’t willing to compete, hopefully, we have enough stuff there to keep us strong throughout the process.”

Travis Frederick ready to ‘knock the rust off’ in return from Guillain-Barré – Todd Archer, NFL Nation- ESPN
Of course, when you already have some skins on the wall, like being an All-Pro, there is a lot more acceptance of things. Travis Frederick seems to be on track in his recovery from both his illness and shoulder surgery – and along the way, he put a new spin on “no pain, no gain”.

“I’m just getting to the end of the quote-unquote recovery program, if you will, for a shoulder,” Frederick said. “[Strength and conditioning coach Mike Woicik] has got a program that he’s been doing for a very long time to get guys back from shoulder injuries, and I feel like I’ve been successful in that program and he’s been impressed with my results, so that’s good. But as far as the overall strength of it, I really do feel confident in that strength, and I feel like I’m back to a level that’s where I would expect to be after a certain amount of training.”

Frederick has a checkup soon with his neurologist for Guillain-Barré, but he believes that will be about potential long-term damage and not anything that will affect his ability to play. Frederick said he has not done any heavy punching work yet — not because of Guillain-Barré preventing him from doing it, but because of the shoulder issues. He said he is still gaining strength in his explosive movements but said that is among the last things to return.

One of the more profound moments in his return, Frederick said, came late last season when he stubbed his toe, which let him know his feelings were returning.

“You kind of get used to it after a while, which is kind of weird, and so then all of a sudden, ‘Oh yeah, I guess I can feel that now,'” he said. “I stubbed my toe and it hurt. It hurt a lot. So, at that point it was a good thing because there were times I’d kick the wall and I got nothing out of it.”

Does CB Jourdan Lewis Have a Future With the Dallas Cowboys? ✭ Brian Martin, Inside the Star
Most of us are very pleased with the work Kris Richard has done as defensive passing game coordinator for the Cowboys. But his first year was not good for everyone.

Unfortunately, Jourdan Lewis just didn’t fit the prototype Kris Richard prefers in his cornerbacks. Richard likes his CBs at least 6 foot tall with an arm length of approximately 32 inches. At 5’10”, Lewis doesn’t quite measure up height wise, but he falls just under the threshold in length with 31 5/8 inch arms. Apparently though, that’s just not close enough.

Lewis is at best fourth on the depth chart right now amongst the cornerbacks currently on the Dallas Cowboys roster. He has two years remaining on his rookie contract and without a clearly defined role heading in to the 2019 season his future in Dallas looks a little murky.

Ezekiel Elliott helps his hometown heal from the loss of a budding football star – Calvin Watkins, The Athletic
The tragic story of Jaylon McKenzie is about a lot of things. But if you are wondering how Ezekiel Elliott became involved in helping McKenzie’s family in the aftermath, it turns out to be something of a tradition for his hometown.

Athletes from the St. Louis area remember where they came from. Whether it’s through a football or basketball camp, former St. Louis area players often return to their hometown. And even when they’re far away from home, they call their youth and high school coaches to hear about the latest players coming up.

“The guys from St. Louis are always going to take care of the St. Louis guys,” Reed said. “And the guys from the city who made it to the pros like Zeke and the Larry Hughes and Jayson Tatums that play in the NBA, it’s always something. They want to give back, and it’s a rite of passage. When you make it, you have a responsibility to open those doors for everybody else and give back… It’s not a surprise to me that a St. Louis guy stepped up immediately and took care of this.”

Elliott didn’t know Jaylon personally but heard of his exploits on the field. When Elliott discovered Jaylon was killed, he called Merriweather, his youth football coach, and instructed him to reach out to the family. Elliott didn’t want publicity for his offer to pay for the funeral. He didn’t tell his agent, the Cowboys or his mother what he was doing. Elliott called the man closest to the community to where he grew up in to find out what happened.

Jaylon Smith set to graduate, receive Notre Dame degree – Patrick Walker, 247 Sports
Jaylon Smith has been a very inspirational story, becoming a top-level NFL linebacker after many thought he would never play due to a devastating injury in his final game for the Fighting Irish. And he just continues to demonstrate great character.

Smith returned to Notre Dame this spring to complete his Film and Television degree, initially paused as he went through one of the most emotionally and physically trying times of his life. He’s now successfully garnered the remaining 21 credits needed to walk, and is scheduled to graduate with the 2019 class during Commencement Weekend on May 17-19, according to Michael Bertsch, the university’s Director of Media Relations.

From there, he’ll head back to Dallas for the start of voluntary OTAs, set to begin May 21.

Dallas Cowboys and ESPN star Darren Woodson hits the field in Dallas real estate | Steve Brown | Dallas News
For most of us fans, the idea of leaving ESPN and football for a job in real estate seems like a distasteful idea. But Darren Woodson is doing exactly that. Of course, Cowboys legends listen when even bigger legends talk.

He says ESRP president Steve Jarvie had been trying to recruit him to his real estate team for years. Jarvie was an officer at Roger Staubach’s old brokerage company when he started putting pressure on Woodson.

“When he was at Staubach he was recruiting me then — when I was still a player,” Woodson said. “About five years ago, he really put the full-court press on.

Dallas Cowboys: Darren Woodson: Dak Prescott is going to win a championship for the Dallas Cowboys | SportsDay staff
Before Woodson is completely gone from football media, he has a few remaining thoughts. And you have to like what he said about Dallas’ chances this year.

“Dak Prescott is a guy that’s going to win a championship for this football team. I’m telling you right now. He’s going to win a championship for this team. I see his work ethic. He’s the first guy in there and he’s the last guy out. He’s helping players out and he’s throwing routes. There’s a lot that he’s doing. It’s almost like that Michael Irvin feel when he’s around. You know what he’s giving you and the time that he’s putting in.

“I think they are finally surrounding him with some guys that can make big plays for him and I think this defense is going to get better as time goes on.”

Daryl ‘Moose’ Johnston Joins Dallas XFL Team As Director Of Player Personnel – CBS Dallas / Fort Worth Staff
Oh, and Woodson is not the only former Dallas favorite to have a new gig, as Daryl Johnston has bounced back from the collapse of the AAF.

His most recent venture was through the since-dissolved AAF where he was the general manager of the San Antonio Commanders.

Johnston will now turn his attention as the director of player personnel for the XFL team based in Dallas — which doesn’t have a name yet.