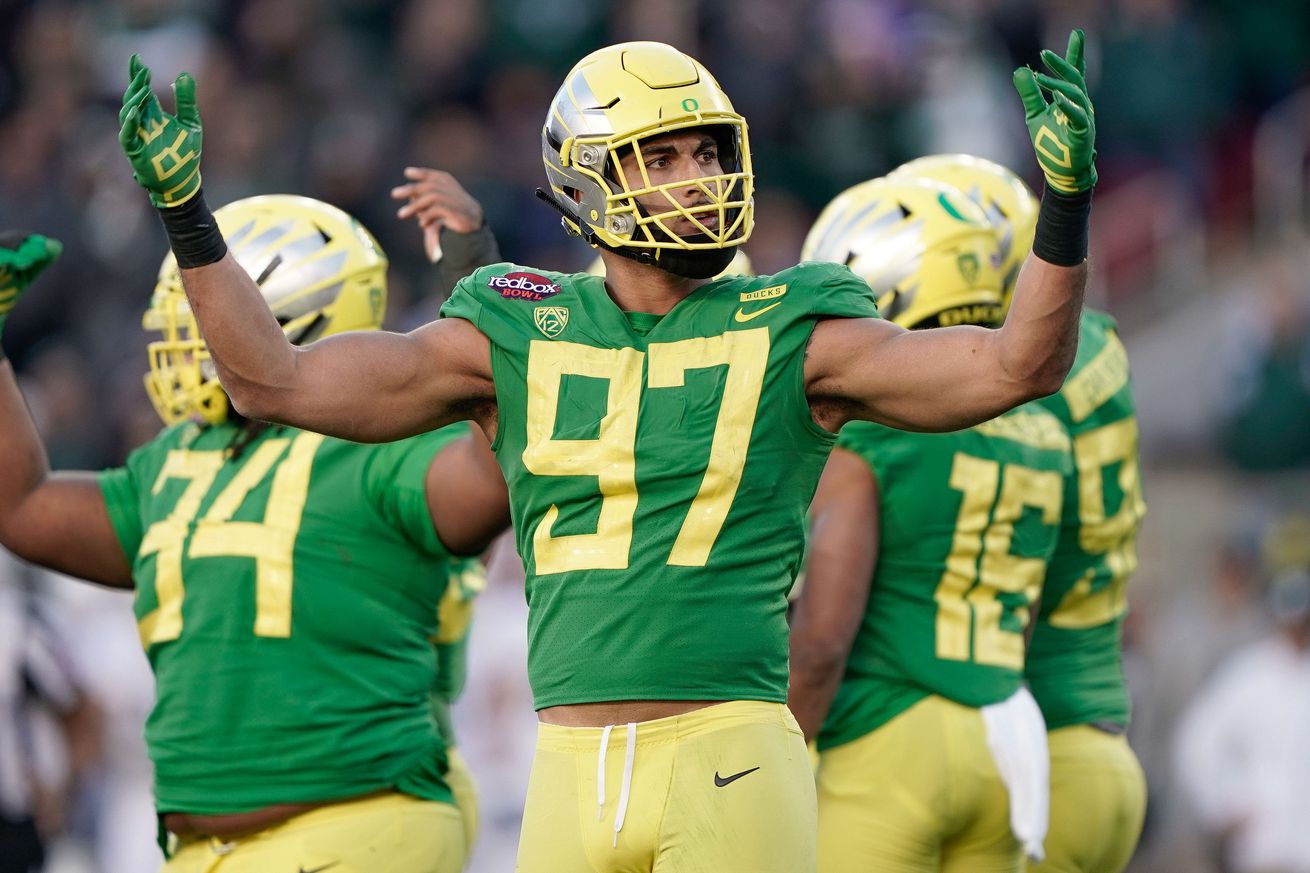 Dallas Cowboys Will McClay: This late rounder jumped off the tape! – Steven Mullenax, The Landry Hat

Which late-round rookie stood out to Will McClay in the 2019 draft process?

Here’s what McClay told Clarence E. Hill Jr. of the Fort Worth Star-Telegram about Oregon defensive end Jalen Jelks, the team’s final selection (241st, seventh round) in the 2019 NFL Draft.

“[Jelks] just jumped off the tape. The length, the ability, the effort, the motor. You see it all on tape. He played a multitude of positions at Oregon so he never got to hone in on one. But he was competitive everywhere. He battled in there, even against the guards and was productive and disruptive.”

There is plenty to be excited about when it comes to Jelks. Possessing a tall but thin frame at 6-foot-5, 256 pounds, the rookie defensive end needs to add some bulk and strength to find success on the next level. But he possesses the raw traits, tenacity, and mobility that could land him a spot on the active roster in his first season. Especially with the questions surrounding the availability of both suspended pass rusher Randy Gregory and veteran Tyrone Crawford.

Three rookies who might just fight their way onto the Cowboys 53-man roster – Danny Phantom, Blogging the Boys

BTB’s own Danny Phantom gives three under-the-radar rookies who may push for a roster spot.

The Wildcats backup cornerback has been on our radar as he was one of the 65 players on our final big board as a potential late-round pick. His size and press ability just seems to fit perfect with what Kris Richard likes in his corners. At 6’4” and 33 3⁄4 “ arms, Westry presents an imposing wingspan, and when you combine that with his 4.3 speed, he can provide quite an obstacle to thrown over.

What I’m excited about: He’s a wild card wildcat, but you have to love the traits. He might not amount to anything, but then again – he could be a mold of clay Richard can work with. Westry is smothering, and if he can work out some of his balance issues, he might be a nice depth guy for the future.

What I’m interested in seeing: Can he be more disciplined with his hands? Westry is a grabber and as nice as it is to see him all over the receiver throughout the route, but if he can’t control his hands, he’ll be a liability out there.

There has been a ton of talk about reducing Ezekiel Elliott’s workload in 2019. Is that something he’s okay with?

Brown said last week that Elliott would eventually slow down if he continued to take on his current workload. Elliott didn’t like those comments, and in response at the Cowboys’ annual charity fundraiser on Wednesday, he said “I haven’t worn down yet”:

Fisher’s latest on Jeff Heath, and the noise surrounding his name and job.

FRISCO – Jeff Heath is lining himself up to hit some golf balls at teammate Travis Frederick’s “Block Hunger’’ charity event at Top Golf when it occurs to me that just 20 minutes earlier the Dallas Cowboys safety told me he would not be hitting golf balls on this night.

But here he is, swinging away, albeit “carefully.’’

”I was just working on my short game,’’ Heath later jokes to me. “No big swings.’’

Twenty-four hours later, Heath is part of the lineup for the Cowboys Home Run Derby to raise money via Reliant Energy for The Salvation Army. And here he is again, taking his swings — again maybe “carefully,’’ but swings nevertheless.

Could the Cowboys be looking to lock up Jaylon Smith ahead of his 2020 RFA? A source close to the situation thinks so.

A source close to the situation tells me the Cowboys have begun talks with linebacker Jaylon Smithas well — one no one outside of the organization saw coming.

Smith is set to become a restricted free agent after 2019, meaning the Cowboys have the right to issue a tender that could be original round, second-round or first-round. Seeing as his original round is the second round — being the 34th-overall pick in 2016 — that leaves just two options, in reality. There is a difference between those two tenders from a financial aspect, and we’ll get into that momentarily. Logic dictates they’d put a first-round tender on him, though, considering he was a consensus top-5 talent before suffering a catastrophic knee injury in the Fiesta Bowl nearly five months ahead of the draft.

Smith was told by many he’d never play football again, but the Cowboys’ medical staff didn’t agree, and rolled the dice on him. Following a redshirt rookie season, which is why he’d be an RFA in 2020, Smith had a mix of growing pains and awe-inspiring plays in his 2017 return to the field and debut in the NFL.

Where does former Cowboys receiver Cole Beasley land on the receiver rankings the Cowboys will face in 2019?

Yes, the Cowboys still have 10 offseason practices to go through. But with the draft out of the way, we’ve seen most of the excitement until training camp finally starts in late July.

With that in mind, I’m thinking ahead to this year’s schedule. It’s way too early to know how the NFL pecking order will shake out, but we do know the Cowboys will be going against some great players this fall.

Over the next couple weeks, I want to preview the best of the Cowboys’ opposition at each position – starting today with receivers.

Check out what starting TE Jason Witten had to say about the current state of the Dallas Cowboys roster!

Per Clarence E. Hill Jr. of the Fort Worth Star-Telegram, Witten said the Cowboys roster has “the most talent I’ve seen” in his time with the organization.

Quarterback Dak Prescott has had his ups and downs, but the 25-year-old completed 67.7 percent of his attempts in 2018 and has thrown at least 22 touchdown passes in each of his first three seasons.

The Cowboys also have Ezekiel Elliott, who has led the league in rushing yards twice in the past three seasons, and Amari Cooper, who notched 725 receiving yards and six touchdowns in nine games last year after he was acquired from the Oakland Raiders.

This offseason has been a whirlwind for the Cowboys, that the signing of Christian Covington has flown under-the-radar. Don’t forget about the intriguing iDL.

When talking about the Cowboys defensive tackle position this offseason, most of the conversation is around Trysten Hill. The Cowboys chose Hill with their first pick of the 2019 draft (58th overall) to supplement the middle of the defensive line. Hill’s tabbed to play the 3-tech spot, and will be asked to use his athleticism and quick-twitch get-off to create havoc in the opposing backfield. That’s something the Cowboys need, especially now that David Irving will no longer be with the team.

But there’s another aspect to the middle of the defensive line, and that’s clogging the middle and stuffing the run. The Cowboys got worked toward the end of the season in that department, here’s how John Owning explained it:

Against the Colts and Rams last season, Cowboys defensive tackles were thoroughly dominated by opposing interior offensive linemen, enabling blockers to get to the second level quickly to inhibit the effectiveness of Jaylon Smith and Leighton Vander Esch. Cowboys defensive tackles failed to hold their ground at the point of attack as they were easily displaced from their gaps, opening giant alleys for opposing ball carriers.