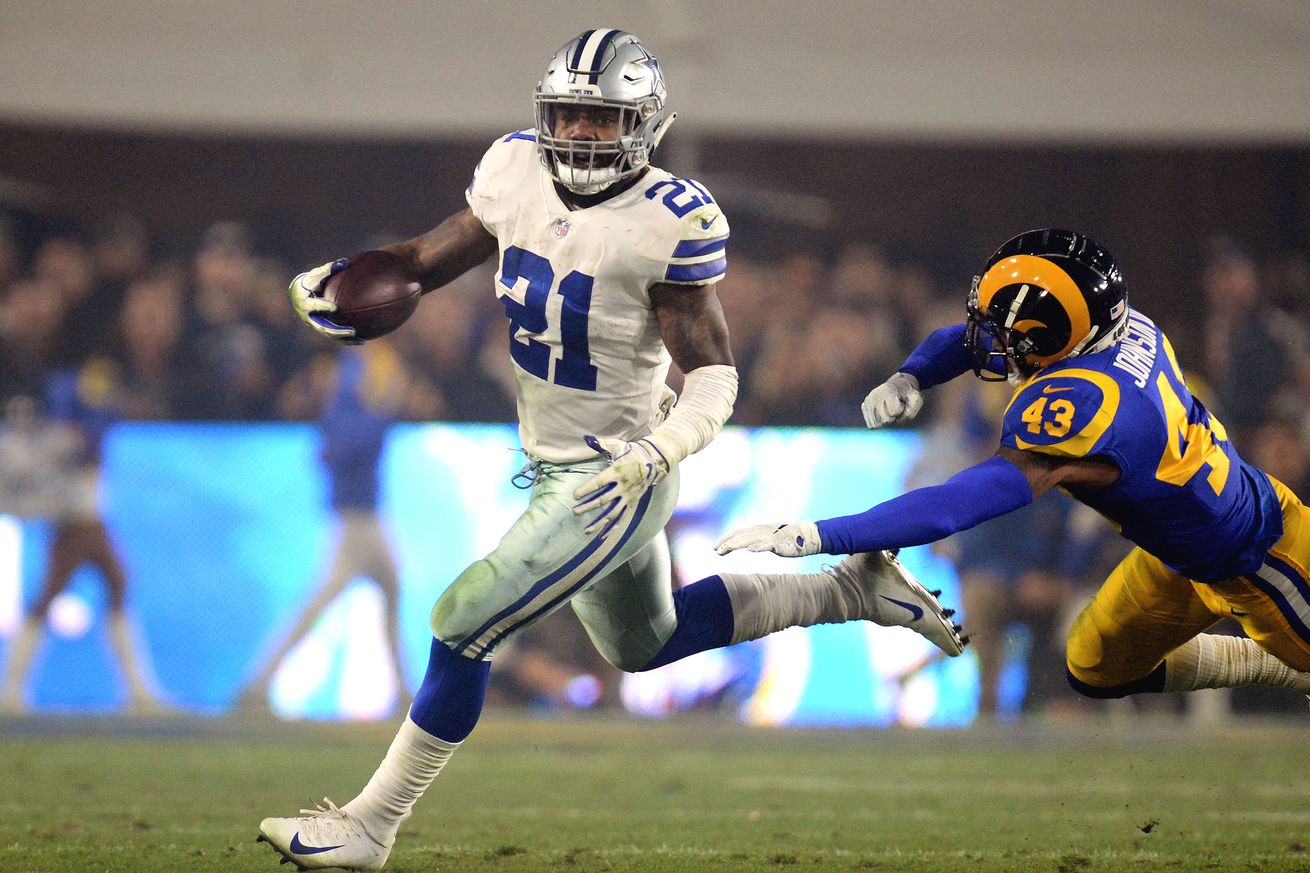 All the latest Cowboys news on display.

While the Cowboys are already into the early stages of contract negotiations with Dak Prescott and Amari Cooper, they have also begun talking with their other offensive star, in what will almost certainly turn out to be a record-breaking deal.

“We’ve got it budgeted that we’re going to pay Zeke a significant contract at some point,” Jones told reporters at the combine. “He’s right at the top of the best in the business, if not the best. And we certainly saw what [Todd] Gurley got paid, and we know that’s probably where it starts, and we’ll go from there.”

If the Cowboys extend Elliott now and get the guarantees out of the way, they could placate him and perhaps escape from the deal as he’s exiting his prime. The Rams received some criticism for signing Gurley to a massive long-term contract, but they can get out from that deal after his age-27 season.

If the Cowboys do give Elliott an extension, they could also structure the deal to give themselves an out once the aging curve kicks in.

What does Ezekiel Elliott’s Vegas incident say about his judgment, and how will Roger Goodell respond? – David Moore, SportsDay Dallas

Ezekiel Elliott was the subject of some negative press on Monday, and given his infamous suspension during the 2017 season, there are now some potentially ominous outcomes for the running back. Beyond questions about what the league’s response might be, there are also questions about the player himself.

Elliott’s past suspension does put him at greater jeopardy in these matters. And while Goodell wouldn’t look forward to another spirited battle with owner Jerry Jones over discipline, the commissioner wouldn’t back down if he felt it was warranted.

So don’t look for anything to come of this. File it away as a reminder that Elliott has a few more steps to take along the road to maturity. Then ask yourself, why did he decide to go to an electronic dance music festival in the first place?

On Monday, the Tampa Bay Buccaneers officially released Gerald McCoy, a six-time Pro Bowl defensive tackle who didn’t fit in their new defensive scheme. It was initially reported that the Cowboy might be one of the teams interested in acquiring his services, but that may not be the case after all.

McCoy has experienced the sort of career that Hill now dreams of. McCoy has totaled at least five sacks in each of the last seven seasons, the league’s longest active streak among interior D-linemen. Since 2010, McCoy has 50.5 sacks, the third-most among all defensive tackles. His six Pro Bowl selections since 2012 tie him with Cincinnati’s Geno Atkins for the most among defensive lineman at any position.

But Dallas has developed a cap-beating philosophy of not over-spending in free agency while preferring to give draftees (along with their more affordable contracts) every opportunity to be impact guys. It could be argued that under McClay’s influence, the Cowboys now give a draftee like Hill — who is already a favorite here inside The Star — every chance at success before moving on to a vet.

It might be surprising but not many coaching staffs in the NFL feature coaches that actually have experience playing in the NFL. The Cowboys, on the other hand, have the most former NFL players on their staff, and that has impacted the way they coach the players.

Of the 26 coaches on the Cowboys’ staff, a league-high 15 have NFL playing experience, totaling more than 1,218 regular-season games. The New England Patriots have one former player on their 14-coach staff in Jerod Mayo, who is entering his first season as an assistant. The New York Giants have one former player on Pat Shurmur’s staff, but quarterbacks coach Mike Shula did not throw a pass during his lone season in the league, for the 1987 Tampa Bay Buccaneers. Bruce Arians’ staff in Tampa Bay has 10 former players among its 29 coaches.

During training camp practices, passing game coordinator and secondary coach Kris Richard will have his players tackle him — though not at full speed — so he can tell if they are using the proper fundamentals. Richard and running backs coach Gary Brown will wear cleats to practice. Richard played in 39 games in four NFL seasons. Brown had two 1,000-yard seasons in his eight NFL seasons.

It is the time of the year when people start trying to predict who will and will not make the final 53 man roster, and if history has taught us anything, it’s that there will be at least one surprise cut. John Owning breaks down some of his predictions, including why a certain speedster might be in danger of not making the team.

Saving the boldest roster prediction for last, as it would be a big surprise for many to see Tavon Austin, who made SportsDay’s own Jon Machota’s way-too-early 53-man roster projection, cut.

Throughout the offseason this year, the Cowboys made a concerted effort to improve their speed and playmaking ability at receiver. First, the team signed Randall Cobb, who may be far removed from his pre-draft 4.46 40 but still possesses impressive skills with the ball in his hands.

Moreover, the Cowboys drafted Tony Pollard in the fourth round, who, despite being listed as a running back, possesses receiver-like ability and is outstanding with the ball in his hands.

Furthermore, the team grabbed a couple of speedsters who have a shot to make the 53-man roster in Toledo’s Jon’Vea Johnson (4.40 40-yard dash) and North Texas’ Jalen Guyton (4.39 40-yard dash).

On Tuesday, word broke that the location for the 2021 NFL draft would be held in Cleveland. The decision comes as the Browns are being listed as trendy playoff picks for the 2019 season, and it seems that the city is experiencing some football positivity after a long dry spell. Cowboys fans will have to book their tickets to fly up to Ohio in two years.

Cleveland, Kansas City and Denver were among the finalists for recent drafts that were awarded to Nashville (2019) and Las Vegas (2020). Multiple outlets reported Tuesday that Denver is not expected to be awarded a future draft this week.

“We’re confident in our city and our proposal, and feel Cleveland has a great chance at securing this event,” David Gilbert, president of the Greater Cleveland Sports Commission, told Cleveland.com in a statement earlier Tuesday.