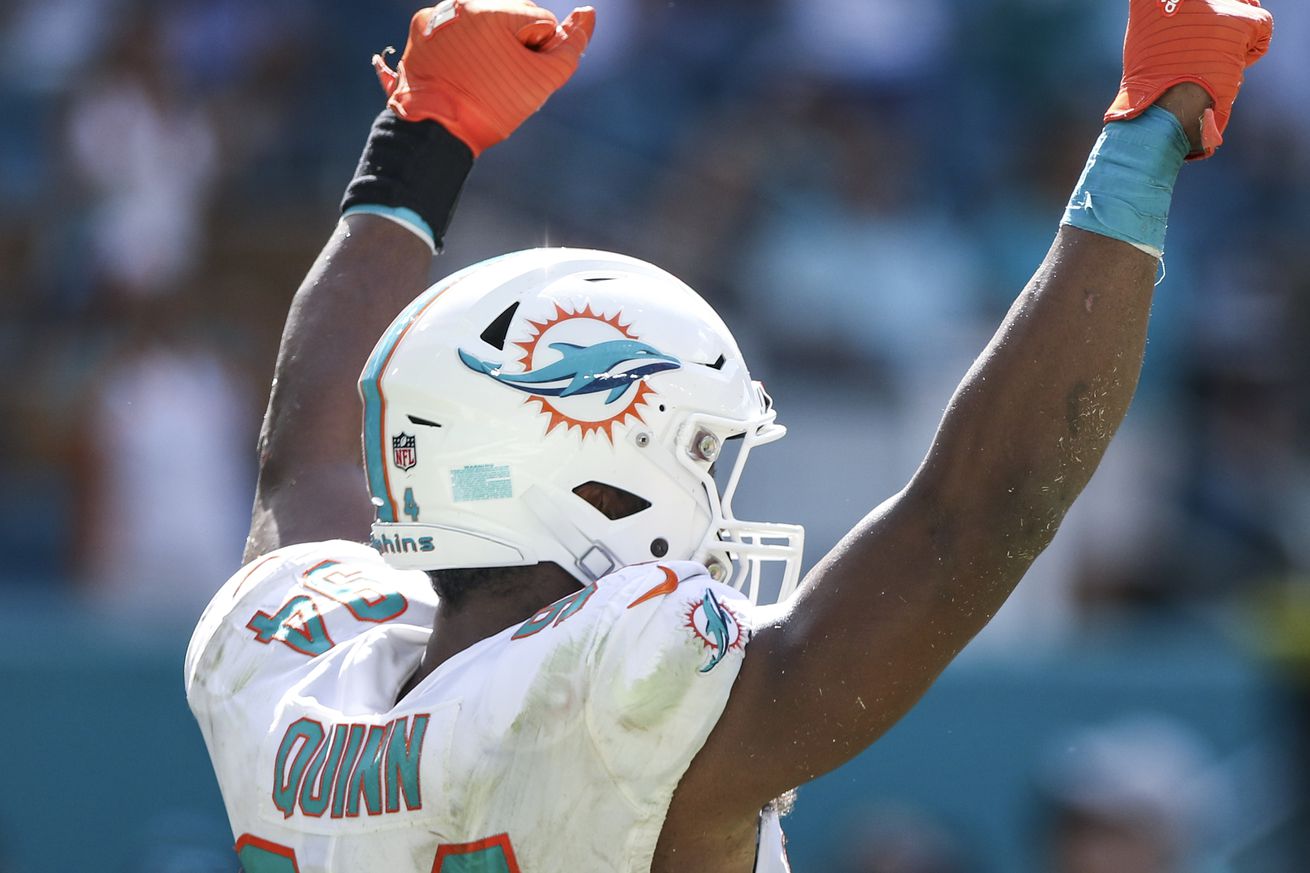 The Cowboys got another RKG in defensive end Robert Quinn.

One of the best moves the Cowboys pulled off during the current offseason is acquiring defensive end Robert Quin for a sixth-round 2020 draft pick. Granted, Quinn is no longer the player who put up double-digit sacks each year from 2012-2014, including the monstrous 19 sacks in 2013. Last year with the Miami Dolphins Quinn managed 6.5 sacks, a decidedly average number as far as defensive ends go. Although on the Cowboys 2018 team, that 6.5 sacks would have been second only to DeMarcus Lawrence’s 10.5 sacks.

Besides sacks, Quinn had a decent year in other stats. He had 38 combined tackles, 15 QB hits and nine tackles for loss. His AV number for 2018 was his best since 2014. He’s no longer a superstar, but he is a solid contributor who had better stats than any Cowboys defensive end not named Lawrence in 2018. Dallas is getting a guy who can help them on the field and should provide a solid presence opposite DeMarcus Lawrence.

They are also getting another of Jason Garrett’s RKG’s.

“The overwhelming impression is: What a professional,” the Cowboys head coach said. “Really serious-minded guy who loves football, works very hard at it.

”He’s got the spirit of a rookie coming in and learning things. Obviously [he’s] a very established, accomplished player, but he’s got a young person’s spirit in that he wants to come to work and get better every day. He works very hard in the meeting room, works very hard on the practice field.

”Certainly off to a really good start for us.”

The Cowboys have to hope that one day Randy Gregory will be reinstated; he has the kind of talent to bust out and be the long-term answer at defensive end. Right now, though, his presence is not something that can be counted on. So the Cowboys needed someone they could count on, and Quinn is that kind of player. He’s played in 111 games out of a possible 128 regular-season games in his career. Outside of a two-year, injury-filled stretch in 2014/15, he’s been pretty durable and he produces.

Quinn is also conscious that there is only one way to stay relevant in the NFL and that is to put in the work. He’s doing that in Dallas.

“Whenever it is time to work, you have to put in the full effort because playing football doesn’t come easy,” Quinn said. “Getting stronger doesn’t come easy. You’ve always got to put in a little extra effort to go above and beyond, to stay at the top, especially with the characters and type of players here. You want to push yourself to help this team get better.

”I try to improve my game each and every day, no matter what my résumé says, because I believe it’s still not good enough. I’ve got a lot more work to do myself.”

One other thing about Quinn, he really wanted to be here. He wanted to come to Dallas over going to New Orleans, even though based on last year, the Saints were closer to being a Super Bowl contender. In fact, they probably should have gone to the big game if not for an outrageous gaffe by the refs on a pass interference call that actually led to a rule change.

New Orleans also pursued Quinn. Why not? He does have 69 career sacks.

The Dolphins allowed the veteran to visit both clubs before brokering a deal. He chose Dallas because of his respect for coordinator Rod Marinelli and this defensive line.

”I love the way they play,” Quinn said of the Cowboys defensive front. “And then when I walked into the building and met with the coaches…

”It was something. It felt right in the gut and in the heart. This is the place I needed to be. It was a hard decision between the two, but I think ultimately this is the best place for me.”

The Cowboys have quality and depth along the defensive line, and Quinn adds to that. He won’t be asked to play every down as Rod Marinelli likes to rotate his players, but he should be the starter and receive the bulk of the time at right end. Tank Lawrence is the star, he’s the leading man, but he might just have gotten the supporting actor he needs to help make the Cowboys defense a Best Picture contender, and the Cowboys team a Super Bowl contender.