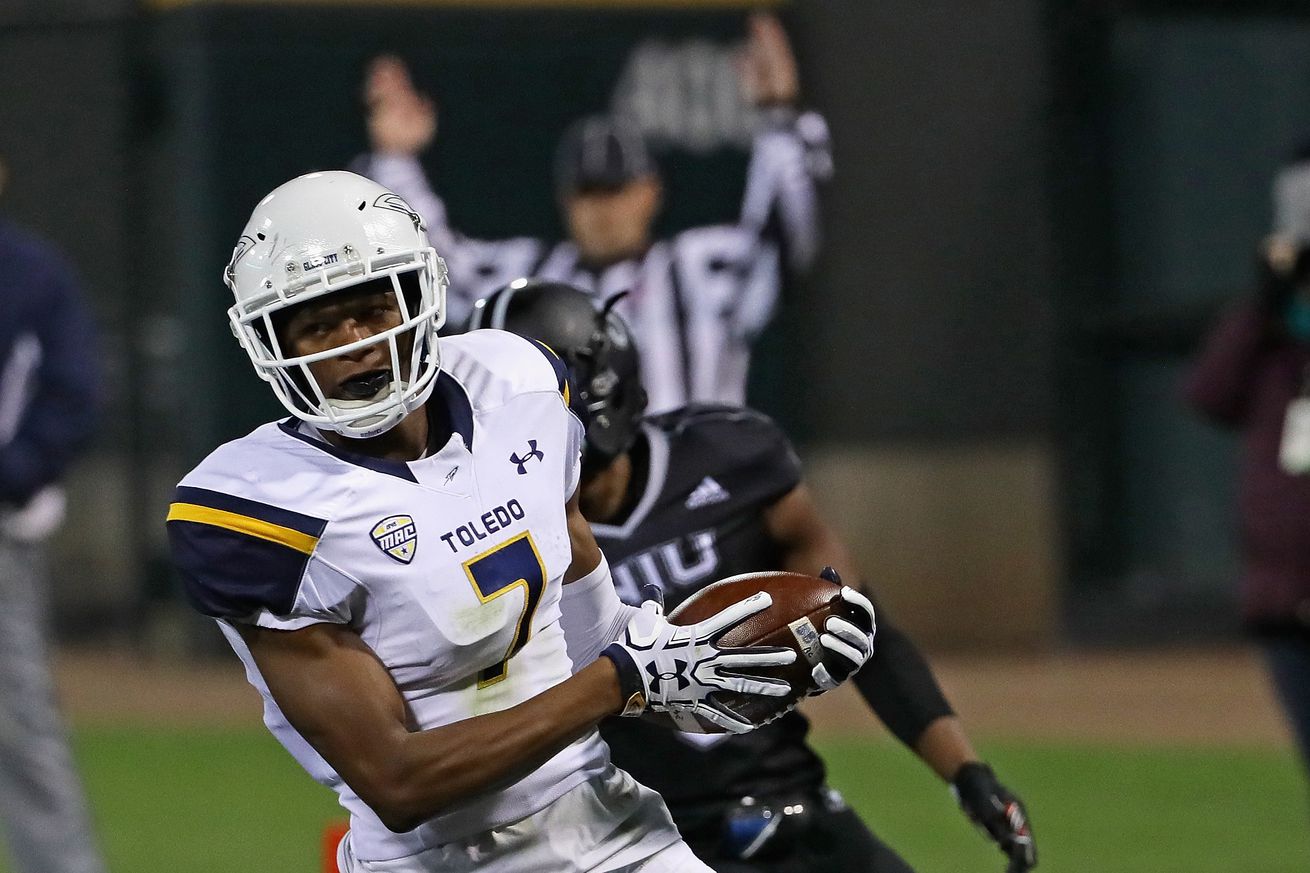 The Dallas Cowboys have re-tooled their wide receiver position over the past year. Their top three receivers used to be Dez Bryant, Terrance Williams and Cole Beasley. None of those three will be catching passes for the Dallas Cowboys in 2019. The team has gone in a new direction by trading for their top receiver, Amari Cooper, drafting their number two guy, Michael Gallup, and signing their slot receiver in free agency, Randall Cobb. They also have some impressive depth with veterans Tavon Austin, Allen Hurns and Noah Brown. They will be waiting to see what another draft pick from last year, Cedrick Wilson, can bring to the table after he sat out last year with injury. Trying to make the roster as a wide receiver this year is going to be a challenge if you’re not one of the top guys.

One player is ready to take on that challenge and is already turning heads. That guy is UDFA Jon’Vea Johnson, a rookie from Toledo who was one of the Cowboys 30 pre-draft visitors. The Cowboys elected not to take a wide receiver in the draft, but once it was over they picked up a few guys, and Johnson was among them.

Here was how Lance Zierlein described him prior to the draft.

Johnson is an outside receiver with slot experience who has the deep speed to create some vertical separation and put it in the paint against speed-challenged cornerbacks. He’s below average as a gather-and-cut route runner and will need to run routes that keep him moving and allow him to unlock his speed. His hands run hot and cold but are generally a plus. His game may be a little limited on the pro level, but he has the speed and enough talent to warrant a Day 3 look.

As should be obvious, Johnson’s primary calling card is his speed. Just a few weeks ago at rookie minicamp he said his goal was to be the guy that can take the top off the defense. Here is a pre-draft breakdown from Bleacher Report:

Athlete who dominated the Toledo pro day with an unofficial time of 4.38 seconds in the 40-yard dash, a vertical jump of 35 inches and a broad jump of 10’8”.

Has played both inside and outside at Toledo and has experience with running routes from multiple alignments.

Certified deep threat with the speed to run away from coverage and command attention deep.

Has the vertical skills to make a play on the ball in the air.

Of course, he has his weaknesses. His frame is thin, he may not be the most technical route-runner and he has had problems with drops. But for an UDFA, he does have that one thing you can not teach, speed.

In the OTAs, he caught the attention of Cowboys receivers coach Sanjay Lal.

“Jon’Vea the last two days, his speed and athleticism and how smooth he is has shown up here almost a little bit earlier than we thought it would,” Lal said Wednesday, “because we think he’s going to process. Most young guys are thinking a lot. He’s done a good job of learning his plays and coming out here and showing what he can do.”

Like we mentioned, the wide receiver corps is deep in Dallas. Breaking your way into that group is a tough proposition, but Johnson brings an element any offense can use – speed. If he can refine his technique and show he is tough enough to handle the physicality of the NFL, he’ll stand a chance. He may not make the 53-man roster, but the practice squad could be his goal.