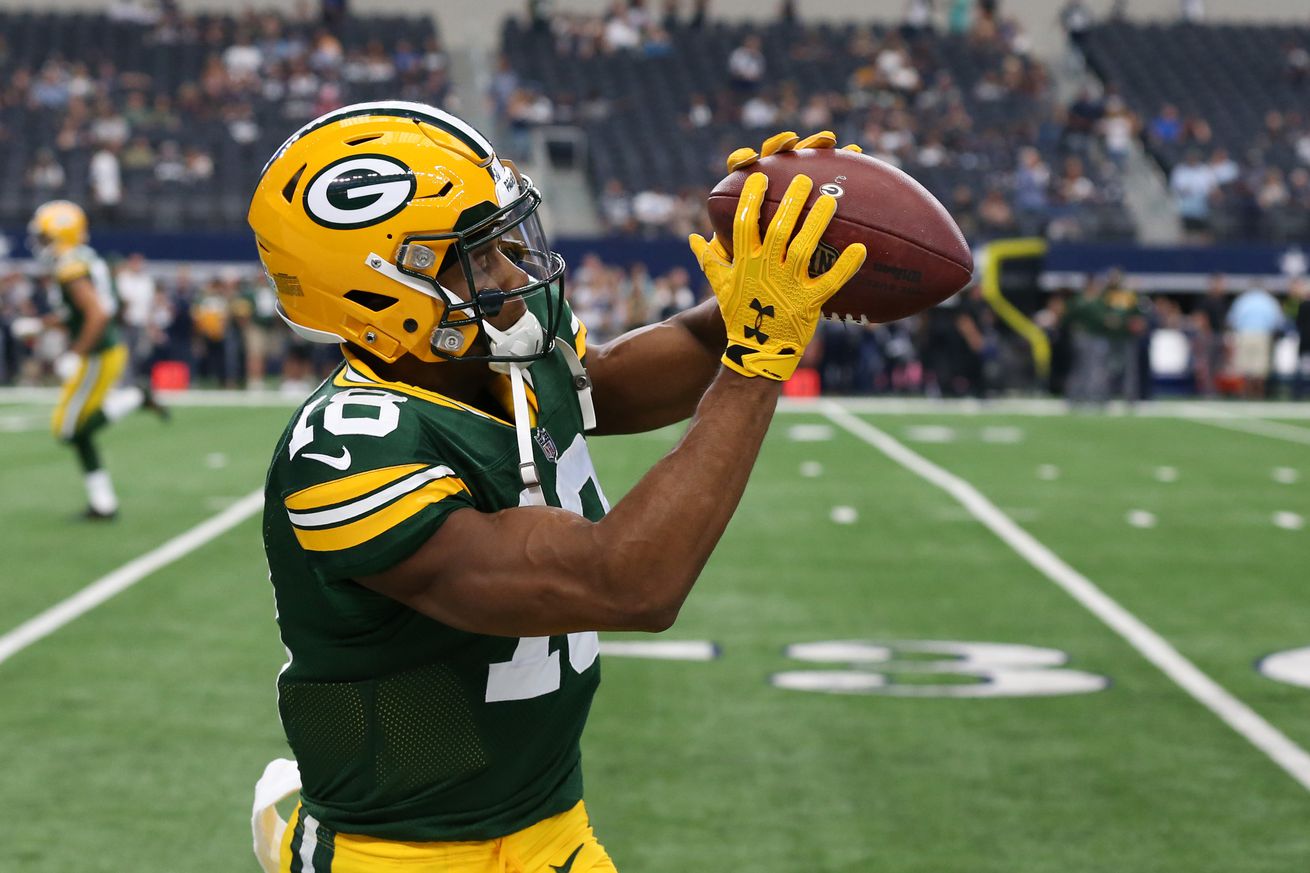 The Dallas Cowboys have had a productive offseason. There was the Robert Quinn trade, getting the DeMarcus Lawrence contract done, picking up players like Kerry Hyder, George Iloka, and Christian Covington in free agency, and some intriguing draft choices and UDFAs added to the team. The team also had only one notable loss in free agency, slot receiver Cole Beasley. That created some concerns (because around here, we obsess about the negative), but those were quickly quieted when the team made an uncharacteristic move. They signed Randall Cobb to step into the slot. He is much more of a “name” player than Dallas has gone after since the failed Brandon Carr signing. And based on what we have seen in the first week of OTAs, he may well be a significant upgrade as well.

Although he has been in the league a year longer than Beasley, Cobb is actually a bit more than a year younger. He is also bigger, 5’10” compared to 5’8”, and carries about ten more pounds. And so far, he has shown no lingering ill effects from the injuries that limited his production with the Green Bay Packers last year, forcing him to miss seven games. While OTAs don’t give much to gauge a player with no contact, he is looking good, as reported by Todd Archer of ESPN.

During Wednesday’s OTA that was open to the media, Cobb certainly did not look like a receiver finding his way. He showed quickness in the slot, catching a quick slant from Prescott. He worked through traffic after a catch. He even went through special-teams drills as a gunner, which is somewhat surprising for a receiver entering his ninth season.

Filling a need is the prime objective for Cowboys free agent signings. Cobb certainly looks to have that well-covered. That is good. What is intriguing about his arrival is how he may expand the role he steps into. Dak Prescott commented on that.

“Let him do everything,” Prescott said. “I mean, honestly, put him in the backfield, put him outside, put him inside, ask him to block, ask him to take a jet sweep. I mean, he’s got film doing all those things and doing all those things really well. I think if we’re not utilizing all of his athleticism and just his versatility, then we’re cheating him as a player and we’re not getting everything we want as an offense.”

Now, if you have read my posts here for a while, you might be aware of my penchant for connecting some dots. And those are some very intriguing dots, because they seem to tie directly into what we all hope new offensive coordinator Kellen Moore is bringing to the mix: Moving players around, confusing the defense, and getting favorable situations for the offense to exploit. The fact Prescott talked about doing so many different things with Cobb makes you think that has been a subject of discussion with Moore. That should get all Cowboys fans a wee bit excited.

Beasley was not used much other than as a traditional slot receiver, although that is likely more a reflection of the predictability of the previous Dallas offensive scheme than any limitations Beasley had. Now, we hope to see more from the young new OC (who, it is interesting to note, is at the moment the same age as Beasley). And Cobb looks very much like exactly what Moore needs to bring some innovation and change. This is one position where flexibility is very much an asset, and it opens up the possibility of sometimes using Amari Cooper and his John Wick-level route running out of the slot. (Sorry for the gratuitous pop culture reference.) You can do that without sacrificing much by having Cobb out wide. It just adds options, and options are very, very good.

Cobb brings a very important intangible to the table as well. He was a standout athlete in high school, being named “Mr. Football” by the governing body for high school athletics in Tennessee – primarily as a quarterback. He would also play QB his freshman year at Kentucky, before switching to wide receiver. Those years of being the passer give him a lot of insight into what the offense does overall, and it has already shown up in the OTAs.

Cobb wants to know where he is in the quarterback’s progressions on certain plays so he can time up his footwork better. Prescott wants to know where Cobb likes the ball if a defender is on his inside or outside shoulder; whereas, with younger receivers, the conversations start with the depth of each route.

This has led to an immediate chemistry between the QB and WR that will only increase as they get more reps together. Prescott’s continued growth at his position is crucial for the Cowboys, and Cobb’s savvy and knowledge will only assist with that.

It also doesn’t hurt that Cobb wanted to come to Dallas, as has been reported by Charean Williams of NBC (among others).

Randall Cobb didn’t say it in front of the media, and he didn’t say it to Cowboys coach Jason Garrett. But Cobb used the same words Earl Thomas did when Cobb ran into Cowboys quarterback Dak Prescott at NFL Honors in February: Come get me.

“Yeah, he said that,” Prescott said. “It’s interesting looking back, and now that I’ve had a couple practices in with him, he’s an incredibly smart guy. I think that’s going to be the best thing that helps him pick everything up and just get going and be a big-time player in this offense.”

As fans of the team, we want to think that Dallas is a preferred destination for many if not most NFL players and prospects. In this case, it is rooted in truth, as Cobb is joined by Quinn in having taken some initiative in landing with the Cowboys.

Now, he is exactly where he wanted to be, and it looks like he is exactly what the team wants in a slot receiver. With a talent laden roster and head coach Jason Garrett in a contract year, there is a lot riding on this season. Cobb is showing every indication that he is more than able to shoulder his share of the load.