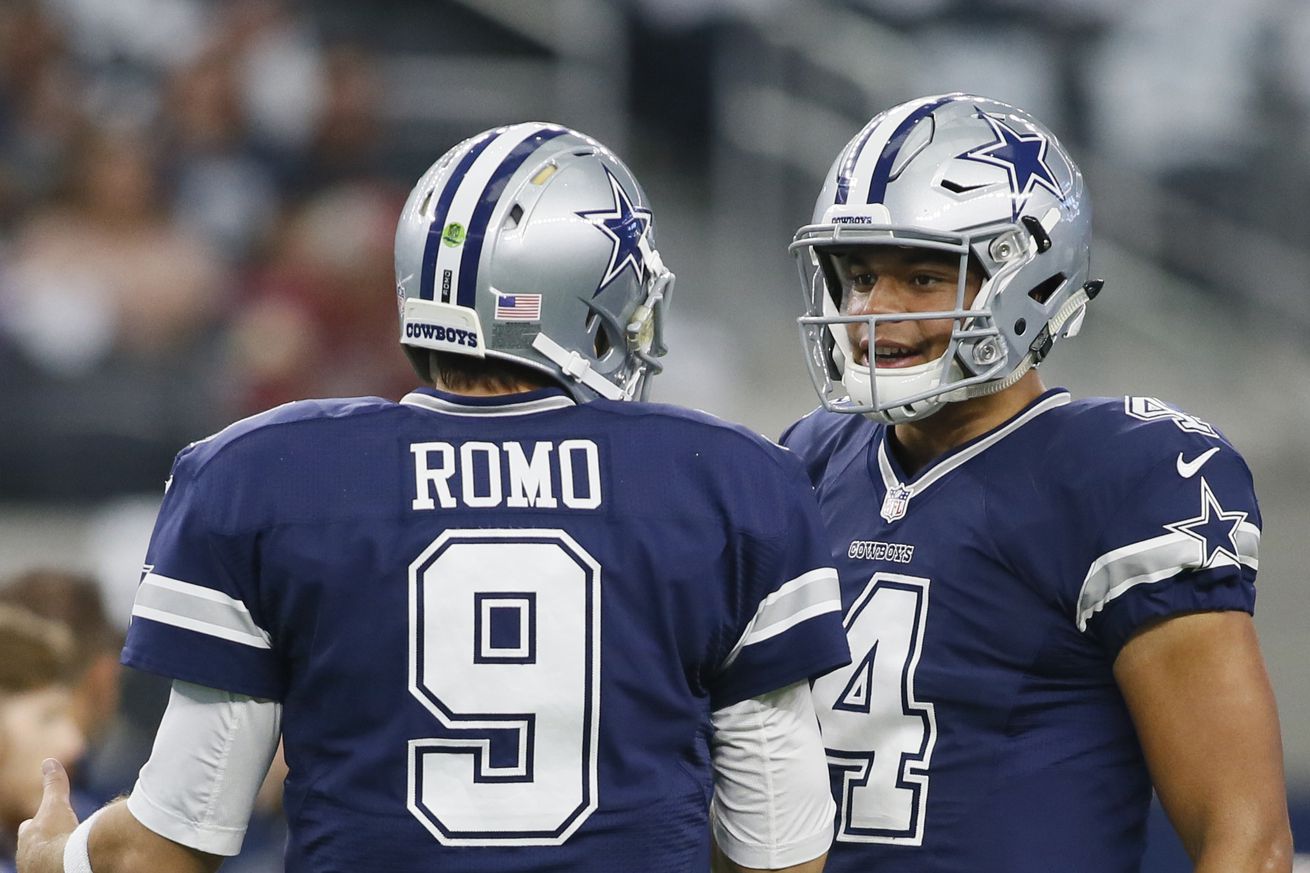 Who makes the elite group, and who are just flat out awful?

If you’ve been hanging out on social media recently, then you’ve probably seen a bunch of people using the Tiermaker app to group things. From favorite fast food joints to current quarterbacks, nothing is off limits. Fans are having a go at it, placing players into tiers ranging from elite to bad.

We thought we’d give it a try, only our rankings stay within the organization as we take a look at where some of the more notable Cowboys quarterbacks fall. Without further adieu, here is our list:

As a starting quarterback, Roger Staubach won 75% of his games. That’s like going 12-4 your entire career. The Cowboys went through a stretch where they won the division 11 times over a 14-year span and Staubach was a big part of that, including two Super Bowl victories in the ‘70s. He was a big reason for the team’s success and the ever-growing popularity that manifested into the label, “America’s Team.”

While Staubach won a higher percentage of his games, Troy Aikman enjoyed the most post-season success as he helped the Cowboys win three Super Bowls in four years. Staubach and Aikman are both Hall of Famers and not many would argue their place in this group. Tony Romo, however? That’s a different story.

Romo is not a Super Bowl champion and for that reason and that reason alone – he’s not likely to make it to Canton, but when it comes to what he has done on the field – few Cowboys quarterbacks are better. He holds all the Cowboys passing records, including throwing 83 more touchdowns than the next person on the list (Aikman). Sure, times have changed now as it’s more of a passing league, but Romo has a lower interception percentage than any Cowboys quarterback with at least 50 starts.

There is no doubt that Romo has had some ill-timed miscues when it just so happens the whole world is watching and that will inevitably haunt him forever. Regardless, he’s still one of the best to put on a Cowboys uniform and he’s given fans a lot to cheer for even when the team wasn’t quite good enough to win it all.

While the top three quarterbacks in passing yards are all in the elite group, the next three are found here. Regardless of what you think of Dak Prescott, he’s off to a smoking hot start. He’s already passed the 10,000 yard mark and is averaging more yards per game than all the top guys. He’s already a two-time Pro Bowler and is about to become the highest paid player in Cowboys history.

Danny White took over as the Cowboys quarterback after Staubach retired and took the team to three-straight NFC Championship games. Unfortunately, he never led them to the big game and he struggled later into the ‘80s, eventually losing his job to Gary Hogeboom. He finished his career winning twice as many games as he lost and with the fourth-most passing yards in team history. He’s also third in touchdown passes, even ahead of Staubach.

There’s a whole generation of people who remember “Dandy” Don Meredith as a color commentator on ABC’s Monday Night Football alongside Howard Cosell and Frank Gifford. What many don’t know is that Meredith was one of the original Cowboys and earned three Pro Bowl honors before Staubach showed up. Similar to White, he could never win the big game, and he was the team’s quarterback in the epic “Ice Bowl” game against the late Bart Starr.

Drew Bledsoe’s career as a whole would push him into the above average tier, but his time in Dallas wasn’t anything spectacular. In just a season and a half in Dallas, Bledsoe threw 30 touchdowns, and never had a losing record. But he just wasn’t getting the most out of the team as Bill Parcells made the switch to Tony Romo midway through the 2006 season.

Jon Kitna only started nine games, but his experience allowed the team to have a fighting chance whenever Romo went down. Kitna has the third highest QB rating (behind Romo and Prescott) of quarterbacks making at least nine starts.

Most people remember Craig Morton as either the player who time-shared with Staubach or the Denver Broncos quarterback who lost to the Cowboys in Super Bowl VII. In actuality, he was a pretty good quarterback in between the retirement of Meredith and the emergence of Staubach. At the time, he became the first quarterback to start in the Super Bowl for two different teams. Unfortunately, he struggled in both games, throwing a combined seven interceptions.

The post-Aikman days were brutal for Cowboys fans. At the turn of the century, Quincy Carter took over as the starting quarterback and while he was okay at times, he finished his three-year career with more picks than touchdowns. He did have the best season of his career when Parcells showed up in 2003, including helping the team earn a wild card spot. Carter was released the following season after failing multiple drug tests. His release turned out to be a stroke of good fortune as it opened up a roster spot that was just enough to keep Romo on the team.

Fun little trivia – did you know the Cowboys quarterback with the most passing yards per game is Kellen Moore? Despite losing both games he started at the end of the 2015, Moore brought a spark to the offense, throwing for 779 yards and four touchdowns. It was enough to keep the team interested as he entered the following season as the backup to Romo. Injuries to both Romo and Moore sent their careers on different paths as Prescott took over as the starter and never let go. Moore is now the team’s offensive coordinator and will look to begin a new legacy within the organization.

Jason Garrett wasn’t a terrible quarterback, but he wasn’t great either. Some would say it’s indicative of his coaching career. Garrett was solid backing up Aikman as the Princeton graduate had a modest 6-3 record as a starter and is tied with Prescott for the lowest interception percentage among all Cowboys quarterbacks whose made at least two starts. While Garrett was fine, his skills had limitations, forcing the team to sign Bernie Kosar following another Aikman injury in 1993. The highlight of his career came in 1994 when he helped the Cowboys complete an epic 42-31 comeback win over the Green Bay Packers on Thanksgiving.

When Romo’s injury in 2015 completely derailed the team’s season, it made us question the coaching staff and how they could let something like that happen. But then I think back to the 1990 season where Jimmy Johnson’s Cowboys were on the cusp of making the playoffs after finishing 1-15 the previous year. The team collapsed thanks with the terrible quarterback play of Babe Laufenberg. The team had a chance to finish 9-7 and earn a wild card berth, but a four-interception effort killed those hopes as the team lost 17-3 to the Philadelphia Eagles. Laufenberg may be a fan-favorite now as a color analyst for the team, but for us older fans, he’ll always be remembered as a hope-crusher back in 1990.

What were the Cowboys thinking when they signed Ryan Leaf in 2001? Well, from what we know of Jerry Jones, they were probably thinking that the former number two overall pick in the 1998 draft could help resurrect a team that had no real talent at the quarterback position. Of course, that feeling didn’t last long as Leaf lost all three games he started and was released the following season.

Brandon Weeden and Matt Cassel get lumped together because they collectively couldn’t help a team that was pretty good win football games. After a collarbone injury sidelined Romo, the team thought they had a viable backup in Weeden. They were wrong. So, then they went out and traded a fifth-round draft pick to acquire Cassel. That wasn’t any better. The two combined for a 1-9 record and made all of us realize just how important having a good quarterback is.

How would you set up the Cowboys quarterback tiers?