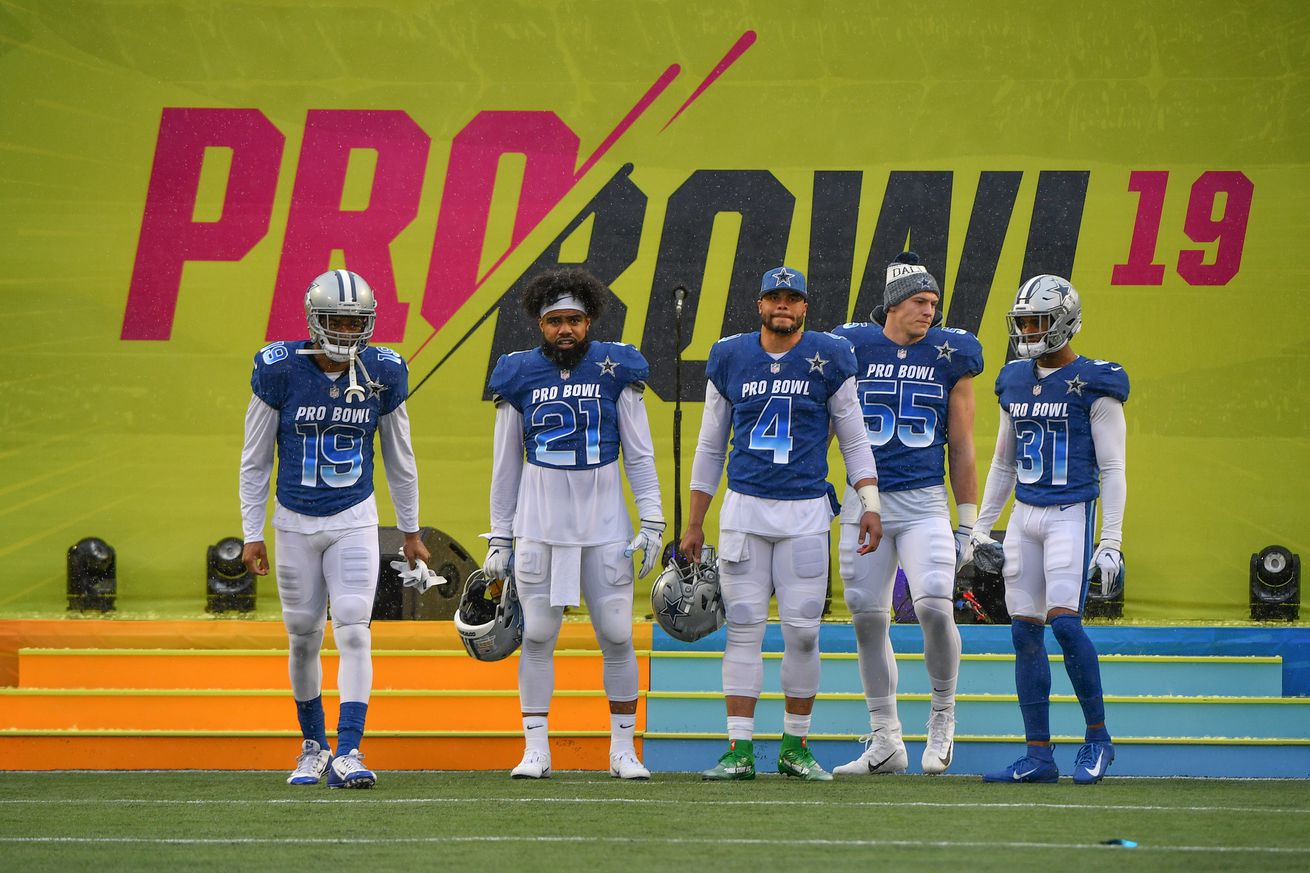 We’re nearing the end of May which means we’re just under two months away from training camp. As the days pass by there are many who like to tinker with a potential 53-man roster for the Cowboys. It’s a difficult thing finding 53 guys that you think are capable of helping you win a Super Bowl, BTB’s own Tom Ryle recently tried, but since the team themselves are going to do it at one point it’s a lot of fun to do it ourselves.

The idea of 53-man rosters is interesting though, isn’t it? I mean, a lot of guys show up for training camp in Oxnard, but it’s not like there are truly 53 spots up for grabs. Sure, the t-shirts and rah-rah speeches will preach a “nobody’s safe!” and “everyone has to earn their star!” mentality, but in all actuality a majority of these spots are already taken.

How many of 53 are cemented in stone already? That’s what we’re here to figure out. We’re not talking about pet cats, guys on the bubble, or dudes you’d stand on the table for. These are the players who you’d bet your house were absolutely going to make the team.

In looking at the roster I landed on 39 players that I feel completely secure in making the team. Allow me to explain the absences.

Obviously guys like Cooper Rush, Mike Weber, and Allen Hurns are absent here. While it’s not at all absurd for any of them to make the team, to say that it’s 100% certain that any of them will feels like a stretch.

In all truth Cooper is probably the safest, but as much as people want Mike Weber to be a thing he was a seventh-round pick and the Cowboys aren’t exactly married to him. The same goes for Allen Hurns who, in case you forgot, happens to be battling his way back from a horrible injury and is in a room full of talent that many like.

I’ve also left Brett Maher off of the guaranteed-to-make-the-team list as, well, we saw this team cut Dan Bailey of all people last year. Maher hardly had a season worth banking on so it makes sense that he’d be watched with a careful eye.

Jourdan Lewis is a name that remains fascinating

It was last year around the preseason that the Cowboys reportedly shopped Jourdan Lewis. There’s no denying that Lewis is a talented cornerback, but there’s also no refuting that he doesn’t meet the physical requirements that Kris Richard demands at the position. You can’t change body types at this point.

Where there’s smoke there’s often fire and there’s been a lot of smoke with Lewis and the Cowboys parting ways. I, like many, would love to see him get his due, but it just doesn’t feel like it’s going to happen in the uniform that he currently puts on every day.

The guys who I’m least confident in

Even though this is a list of players who are by definition the ones I’m most confident in making the team, there’s still a bottom of the barrel.

The Rico Gathers hype train has lost a considerable amount of followers, but even still I’m on the fence about Dalton Schultz. I’m not nervous about him because of anything to do with his game, but saying you’re confident in a second-year tight end who barely played during his rookie season feels kind of weird.

Truth be told I’m also a little bit shaky when it comes to George Iloka. It’s not like the Cowboys broke the bank for him, and we know they believe in the other safeties that they have. Again, I’m confident in him, but I’m the least confident in the guys that I’m confident in. Boom, mind puzzle.

If you looked at the roster through my lens then you see only 14 spots that are truly “up for grabs.” That’s kind of insane when you figure that 39 are locked in which means that about 51 players are fighting for those 14 or so spots. It’s tough.

Which players are you totally confident in? Which are the ones that you are, but are less than the rest (your version of Schultz or Iloka)? How many roster spots do you believe are truly open for the taking?