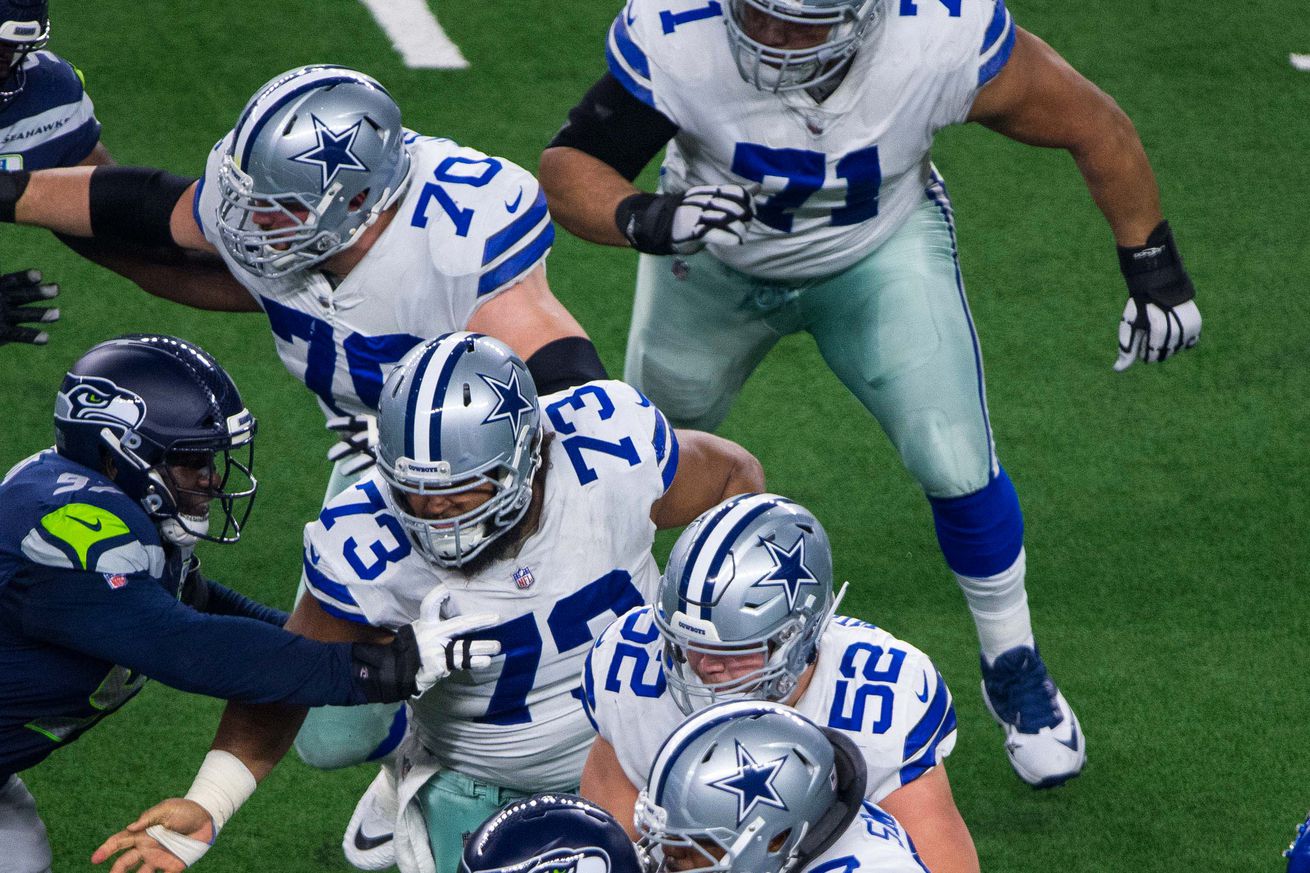 The Cowboys put in work on their offensive line and that’s where the path to a postseason return begins.

Travis Frederick is focused on knocking the rust off after missing 2018 season – Rob Phillips, Dallas Cowboys
Travis Frederick is excited to get back to work after having a season taken away from him, he admits that there is a lot of rust to knock off.

“When you get a chance to go out and do those things that you’ve been doing for such a long time, there’s such a muscle memory that’s associated with it,” he said. “But then again, any time that you take time away from it, you get rusty.”

Frederick is pleased with his recovery, though. And, despite the frustration of missing an entire season with the debilitating illness, he did gain a different – and helpful – perspective away from the field.

“I see the game a little bit differently than I did before,” he said. “A lot of times during the season you are so focused on your technique and focused on what it takes physically to get your job done, you don’t get a great chance to advance mentally. And a lot of times you do that during the offseason, you do your best to do that.

Inside the Cowboys’ Film Room: The 2018 pass-protection disaster, Weeks 5-8 (Part 2 of 4) – Bob Sturm, The Athletic
The second part of Sturm’s series examines games 5-8 of 2018, which included several poor decisions from Dak Prescott but also poor play by this offensive line.

They did, of course, address the wide receiver situation with the massive Amari Cooper trade prior to playing Tennessee, but issues will continue to haunt Dallas for quite some time. While Dez Bryant-based decision-making from springtime can be debated, the team’s effort to replace him absolutely fell well short of acceptable.

That impact reverberated throughout the offense, and the most obvious effects were seen in the Cowboys’ inability to consistently move the ball through the air. This was best seen with a quarterback who could seldom locate open receivers, which in turn led to holding the ball too long behind an offensive line which sported too many significant weak spots. The stress of all of these separate components built up and, as a clear result, then came all of the sacks.

Who is the best All-Pro on the Dallas Cowboys’ roster? Offensive linchpins lead the way -John Owning, SportsDay
Elite talent level doesn’t always equate to championships but it certainly helps and the Cowboys have their more elite players right up front.

While Martin is the best player on the Cowboys’ roster, Tyron Smith is probably the most talented. Listed at 6-5, 320 pounds with absurd 36 3/8-inch arms, Smith looks like he was manufactured in a lab to be the prototypical offensive tackle.

Though myriad injuries have hampered his freakish athleticism, Smith is still a better athlete than 90% of the other offensive tackles in the NFL. He effortlessly expands his set points in pass protection to combat the various rushes from defenders. Furthermore, he’s fantastic as a lead blocker in space, as he has the speed to get out in front of the ball and stymie much better athletes. Smith’s athleticism also enables him to recover when initially beaten in pass protection.

State of the Cowboys roster: How much better do you feel about the offensive line? -Michael Sisemore, Blogging The Boys
The Cowboys offensive line is its strength but it should return to dominance in 2019 with the additions in the offseason.

Where the Cowboys really helped themselves is by prioritizing this unit in both free agency and the draft. Cameron Fleming may not be a perennial All-Pro like Tyron Smith but he has started many games in this league for playoff-contending football teams. As the swing tackle, you would be hard-pressed to find anyone better. Joe Looney returns to his role as a backup at guard and center. Xavier Su’a-Filo has his shortcomings but plays with above average power and helped the Cowboys win a few games last year.

The biggest addition, without question, was the drafting of Connor McGovern in the third round. There’s an old adage of the rich getting richer and that’s exactly what the Cowboys did here. If offensive line is of the utmost importance and it’s something this team does well, why not? McGovern will not be forced to start but could if you needed him to and he’s part of the future plans for this line if some veterans price themselves out of Dallas in 2020. In the UDFA pool, the Cowboys picked up a few talents such as Mitch Hyatt, who have started a ton of games at the college level and can compete for a role.

Cowboys players know Jason Garrett is facing a prove-it year – Clarence Hill, Fort Worth Star-Telegram
Cowboys players know that expectations are set very high for the coaching staff in 2019 but Dak Prescott argues everyone could be in their final year if they don’t reach potential.

Do Prescott and the other players fully understand that Cowboys coach Jason Garrett is in the final year of his contract and is essentially coaching for his job in 2019?

“So am I,” Prescott said. “There’s no difference. We’re both in our last year. It’s not talked about. It’s not discussed.”

“Look, this organization is extremely loyal to signing their own players,” tight end Jason Witten said. “They believe in that. I think when it all kind of clears out, that will be the same thing. I think these players know that — Amari, Zeke, Dak — that those things get resolved because both sides want to be there.

“I love how they’re handling it. They’re here working and they’re not getting caught up in that. I don’t see that being any issue because as long as I’ve been in this organization that’s never been an issue, and I think those players know that.”

Cowboys QB Dak Prescott explains how — and why — he’s been ‘more stern’ as a leader this offseason – Jon Machota, SportsDay
Dak Prescott knows that the Cowboys are his franchise to steer and he plans to be every bit of the leader he’s expected to be.

“I’ve always been vocal,” Prescott said. “I can probably say this year I’ve been more stern. Not necessarily mean, but I expect a lot from these guys, especially guys that have been here. And I want them to expect the same from me.

”I’d be pissed if they weren’t calling me out for it, if a guy blows a route or something like that. I’d be mad as hell if they don’t call me out for it.”

Experience on the field has helped Prescott become comfortable in that role, but so has being around many of the same teammates for the last three years.

”With some guys,” he explained, “I’ll be like, ‘What are you doing? Are you all right? What the hell is going on? You don’t do that. You’re better than that.’

Jason Witten ‘anxious to go prove’ he still can play – Todd Archer, ESPN
Cowboys TE Jason Witten hears the whispers about his age but he’s eager to show that he’s as crafty as ever.

”My game has never been built on speed. When I was 20 years old, I got drafted here and they said, ‘He’s not real fast,’ and so it’s all about fundamentals and techniques to how you play this position. I’ve got a lot of time on task in this system and what allows you to be successful. I’ve got to go back to do that. That’s what gives me confidence. But like anything, this is a young man’s game and I’d need to see it from him before I believed it.”

OC Kellen Moore & the Art of Installing an Offense – David Helman, Dallas Cowboys.com
Kellen Moore knows that he’s got some freshness to install in the Cowboys offense ahead of 2019.

“It’s different pieces each and every day, whether it’s formations or whether it’s personnel, play type, field zone,” Moore said on Wednesday. “All these things, they kind of get flavored up each day. So whether it’s an emphasis in a certain formation, and then maybe down the line introduce a personnel group that you don’t do as much.”

Through two weeks of OTAs, Moore’s commitment to variety does seem noticeable. The Cowboys have taken the field in a multitude of different personnel groupings and formations.