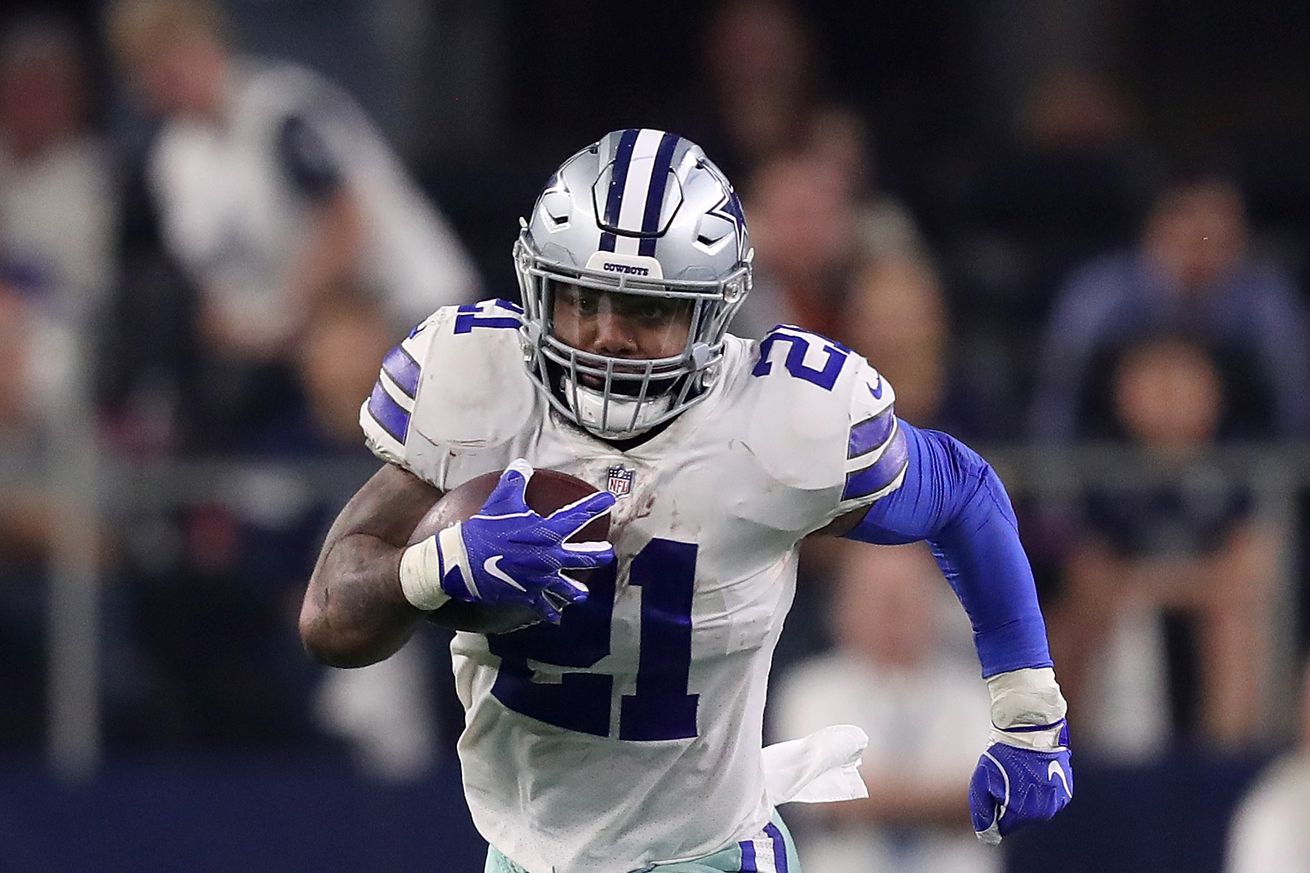 The Cowboys have an elite running back, but their running game could still use some improvement.

An effective running game is the foundation of the offense for the Dallas Cowboys. It’s the reason they’ve invested so many premium draft resources in offensive linemen, and it’s the reason Ezekiel Elliott was selected fourth overall in the 2016 NFL Draft. Elliott has won the rushing title in two of the last three seasons and it would’ve been all three had he not missed six games serving a suspension in 2017. When Zeke leads the league in rushing, the Cowboys go to the playoffs. It’s a good formula for success.

But despite the Cowboys commitment to the ground game, the team wasn’t all that effective running the ball last season. Sure, Elliott had the most rushing yards, reeling off 1,434 yards last season, but those numbers are heavily padded by volume. Elliott had over 300 carries last year, which was 40 more than the next guy (Saquon Barkley). Clearly, the team leaned heavily on Elliott, but when it came to efficiency, it just wasn’t there. According to data provided by Sharp Football Stats, the Cowboys were a middle of the pack team when it came to success rate on running plays:

To complicate matters even further, the Cowboys rushing success got even worse the closer they got to the goal line. We all know about their red zone woes, and their inability to run the ball played a big part in that. Suddenly, the capability of imposing their will on their opponents had vanished.

That’s not want you want to see from a team that has Elliott in the backfield. This has made some people a little sour on the running game. Maybe running the ball so much isn’t the answer. Maybe throwing a lot of money at the running back position isn’t a good use of cap funds. These are some thoughts roaming around Cowboys Nation and with the recent lack of success of the team’s running game, it’s not hard to see why.

Before we jump to any conclusions, it’s important to be thorough in our assessment of what’s really going on. John Owning from Dallas Morning News provided an excellent breakdown of the Cowboys running game, and there were several key factors we should all be mindful of, including how often the team faced loaded boxes as well as the overall health of the offensive line. Some of these things were just bad luck, but some were also self-inflicted from poor coaching. The good news is that the Cowboys have taken steps to improve both these areas.

The Cowboys don’t try to hide the fact that they’re going to run the ball down your throat, but that type of commitment makes it easy for defenses to counter. As Owning points out, the Cowboys have a tendency to run using heavy personnel and condensed formations far too often, basically inviting the defense to stack the box to stop their rushing attack. If you look at all the 1,000+ yard rushers in the league last year, Elliott ranked second in percentage where he faced at least eight men in the box (stats courtesy of Next Gen Stats).

That’s three times as often as the Los Angeles Rams running back Todd Gurley faced. While it’s admirable the Cowboys are willing to stare danger in the eye and face it head on, they are putting a lot of unnecessary pressure on Elliott.

The Cowboys don’t have to put on their fancy pants to win in the running game, but it wouldn’t hurt them to change up their wardrobe a bit. That’s where Kellen Moore comes in. Already, there’s been a lot of talk about different formations. The Cowboys are still going to run the ball, but they’ll do it from less predictable run formations. Different looks can help spread out the defense more and lead to fewer eight man fronts. That will ultimately improve the team’s run success rate.

This Kellen Moore pre-snap magic is gonna be something else. Buckle up.

Regardless of how they line up, the Cowboys still have to win in the trenches. Last year, the offensive line was a shell of their former self and it hurt the running game. Injuries played a big role. The team was without their All-Pro center Travis Frederick for the entire season. While his loss was the most significant, he wasn’t the only starter who missed time. Tyron Smith missed three games, Zack Martin missed two games, and rookie left guard Connor Williams only made 10 starts last season. Even Williams’ backup Xavier Su’a-Filo missed games after stealing a starting spot. The only normal starter who made it through all 16 games was La’el Collins, who played through nagging injuries all season, including a torn rotator cuff that he had surgery on in the offseason.

The hit to the Cowboys offensive line was pretty noticeable. According to Football Outsiders, they finished with 23.1 adjusted games lost last season, ranking them 24th in the league. In contrast, the Rams and Eagles had the two healthiest offensive lines last year.

The Cowboys didn’t collapse amidst all these injuries. Thanks to players like Joe Looney, Cameron Fleming, and Su’a-Filo – the team kept it’s head above water. Elliott still led the league in rushing, and the Cowboys won 10 games and made it to the divisional round of the playoffs. But the ability of the offensive line did hinder their overall effectiveness. A perfect example of this occurred in Week 5 last season.

Contrary to popular belief, Cowboys head coach Jason Garrett isn’t afraid to go for it on fourth-down in pressure moments but in an overtime loss against the Houston Texans, Garrett had a change of heart. He made the decision to punt on a fourth-and-short rather than trusting his offense to pick up the first down. The decision proved to be costly as the Texans would kick the game winning field goal on their ensuing drive.

While Garrett took a lot of heat for that decision, what often gets overlooked about that situation is that Elliott ran the ball 20 times in that game and 11 of them were for losses or no gain. The Texans were sending the farm to stop the run and the Cowboys offensive line just couldn’t get it done.

The good news is the Cowboys offensive line will be better this upcoming season. For starters, they should get Frederick back which is huge. Williams is bigger and stronger now and a year of experience certainly helps. They even caught a break when Connor McGovern was still available in the third round of the draft, further bolstering a strong unit. With a healthier and deeper offensive line group, the Cowboys should be able to get back to overpowering teams in the run game.

Last year the Rams had the highest running play success rate and they were the top seed in the NFC. They also had the healthiest offensive line and had a running back that very rarely faced additional defenders in the box. It should be noted that when the Cowboys are healthy and calling good plays, they’re not too shabby themselves. In 2016, that same Ezekiel Elliott helped the Cowboys have the top ranked successful running play rate in the league, and consequently finished 13-3 with the top seed in the NFC.

We can all point to Elliott and downplay his importance to the team because after all – he needs a good offensive line and quality play-calling to be effective. That would be a mistake. Any player in the league needs contribution from his supporting cast if they’re going to be successful. One thing is for sure, when the pieces are there – Elliott leads this offense to greatness.

Running the ball more isn’t the answer; however, running the ball better, is. A healthier offensive line, a more creative offensive coordinator, and a passing game that poses some type of threat – are all things that will help improve the success of the running game. The team has done a good job working to improve these areas, setting themselves up for a promising 2019 season.