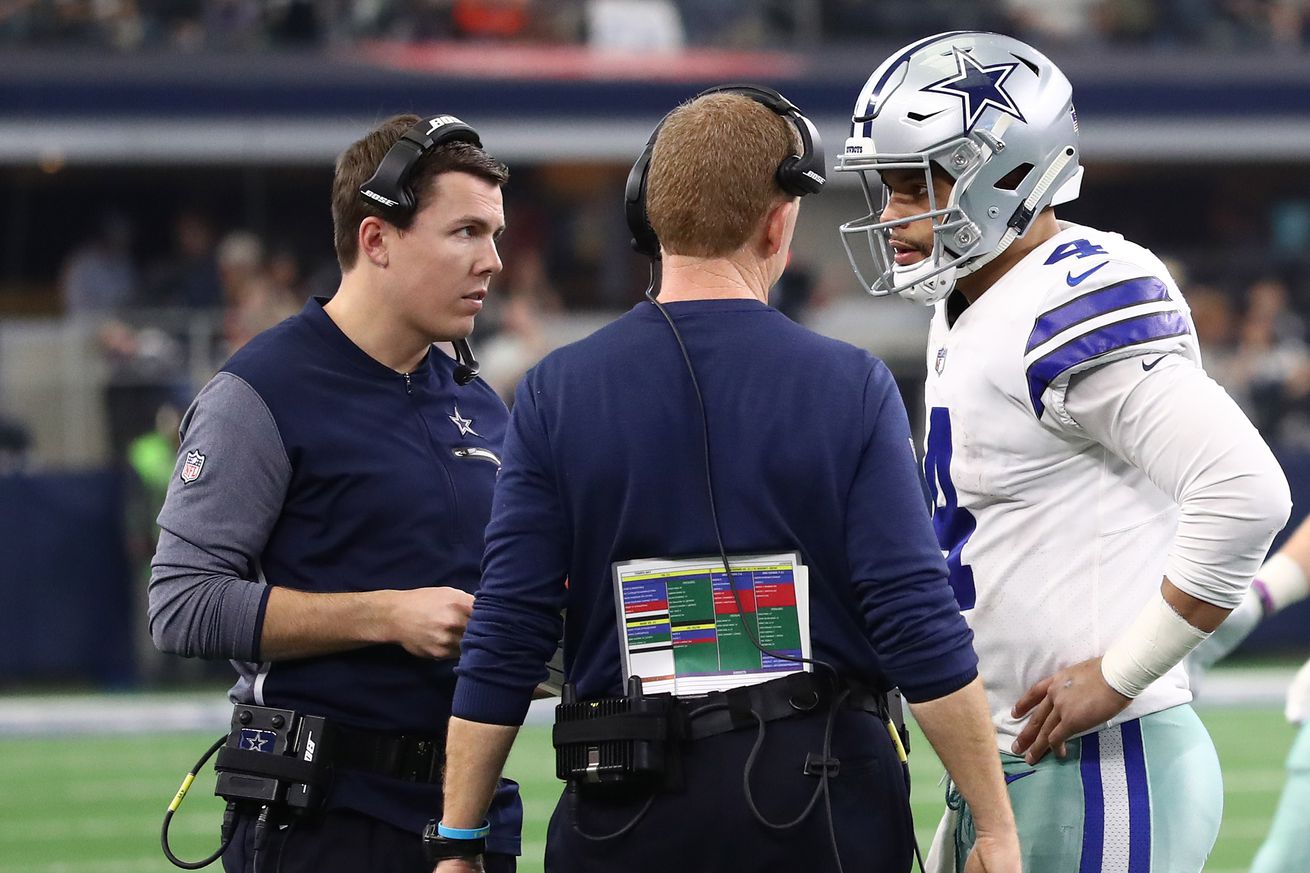 The excitement for what Kellen Moore will do is growing.

One of the big storylines for the Dallas Cowboys this offseason is new offensive coordinator Kellen Moore. Scott Linehan was replaced after his scheme was seen as stale and not taking full advantage of the weapons the Cowboys had on offense. The idea being that Moore will take the Cowboys offensive scheme and perform a refresh. We’ve been trying to track that as well as we can, first by projecting some changes we might see based on what Moore ran at Boise State. Then we checked in on some changes with the offensive line and wide recievers at OTAs. Finally, we looked at the different personnel combinations that were being observed at OTAs. Reading through all of that would be an excellent primer as to what is coming from the Cowboys offense.

We’d like to add one more look at Moore, this time from another site. Inside the Pylon does excellent work breaking down football strategy, schemes – basically all things that an amateur coach would want to read. They took on Kellen Moore and put together a must read.

They include this quote from Moore to set the stage of what should be coming for the Cowboys offense.

Our whole goal from an outside perspective is to make it look as confusing as possible. And at the end of the day it’s pretty simple for us. It’s a lot of the same concepts, it’s a lot of ways of doing the same things.

That goes to all the things we’ve been hearing about pre-snap movement and different formations and personnel groupings. But Moore also says that isn’t just window-dressing with a bunch of people moving around, it has a purpose besides confusion.

Moore explaining Boise State’s use of motion to Gruden

The Cowboys under Linehan last year were decidedly on the low end of the spectrum when it came down to pre-snap motion, They ranked 24th in the league, far below the average (source Sports Info Solutions). The Inside the Pylon article notes how Moore’s team’s at Boise State were masters of using pre-snap motion to gain an advantage.

Part of the Boise State philosophy was to outnumber the defense and create pre-snap leverage. Motion was one of their most-used tactics to outnumber and confuse a defense without giving them much time to adjust, especially paired with an uptempo offense. Motion also allowed the QB to make easier reads based on the defense’s pre-snap reactions to the movement.

They continue on with specific examples and visuals from games to make the point.

Boise State would often use overloaded formations—lining up with three receivers to one side of the field and motioning their back to the strong side to create a Quads formation. The idea behind playing in a 4×1 set is to force the defense to overcompensate for the four receivers or end up leaving an area of the field vacant.

They show examples of how the defense might shift a safety over to the four-receiver side, leaving a wideout in a one-on-one on the other side. Other times a defense will keep the safety to the weak-side, but the tight end would be unaccounted for over the middle of the field.

Another Inside the Pylon talking point is about more play-action for Dak Prescott, something everyone has been calling for. In Prescott’s incredible 2016 season, the Cowboys used play-action the fourth-most in the league. There is plenty of play-action in the Boise State playbook and Prescott should see plenty. Here’s a quick look at Prescott’s stats based on play-action splits.

Through his three-year career, Prescott has been more effective using play action than when not. Per Pro Football Focus, Prescott has completed 68.2% of his passes with a 111.6 passer rating using play action in comparison to completing 62.6% of his passes with a 87.2 passer rating on regular dropbacks. The good news for Prescott is that Petersen’s Boise State offense had a lot of play action designed in it. Including rollouts, boots, and waggles like he performed during his rookie season.

They finish up with another item that should be music to Cowboys fans ears. Using Prescott more in the run game, especially in the red zone. They note that at Boise State, sometimes they would sub Moore off the field in the red zone for a more mobile “quarterback” who was more effective in the run game. They won’t need to substitute with Prescott.

Inside the Pylon concludes with this.

The Cowboys’ offensive system will not be identical to Boise State’s or Washington’s with Moore as the offensive coordinator, but I do expect a lot of their core principles to be incorporated into the game plan. Different formations, motion, play action, reduced WR splits, and fewer mirrored concepts will keep the defense off-balance and guessing. The offense will still go through Ezekiel Elliott and Amari Cooper, but it won’t be as forced as it was in 2018.

Do yourself a favor, check out the whole article.