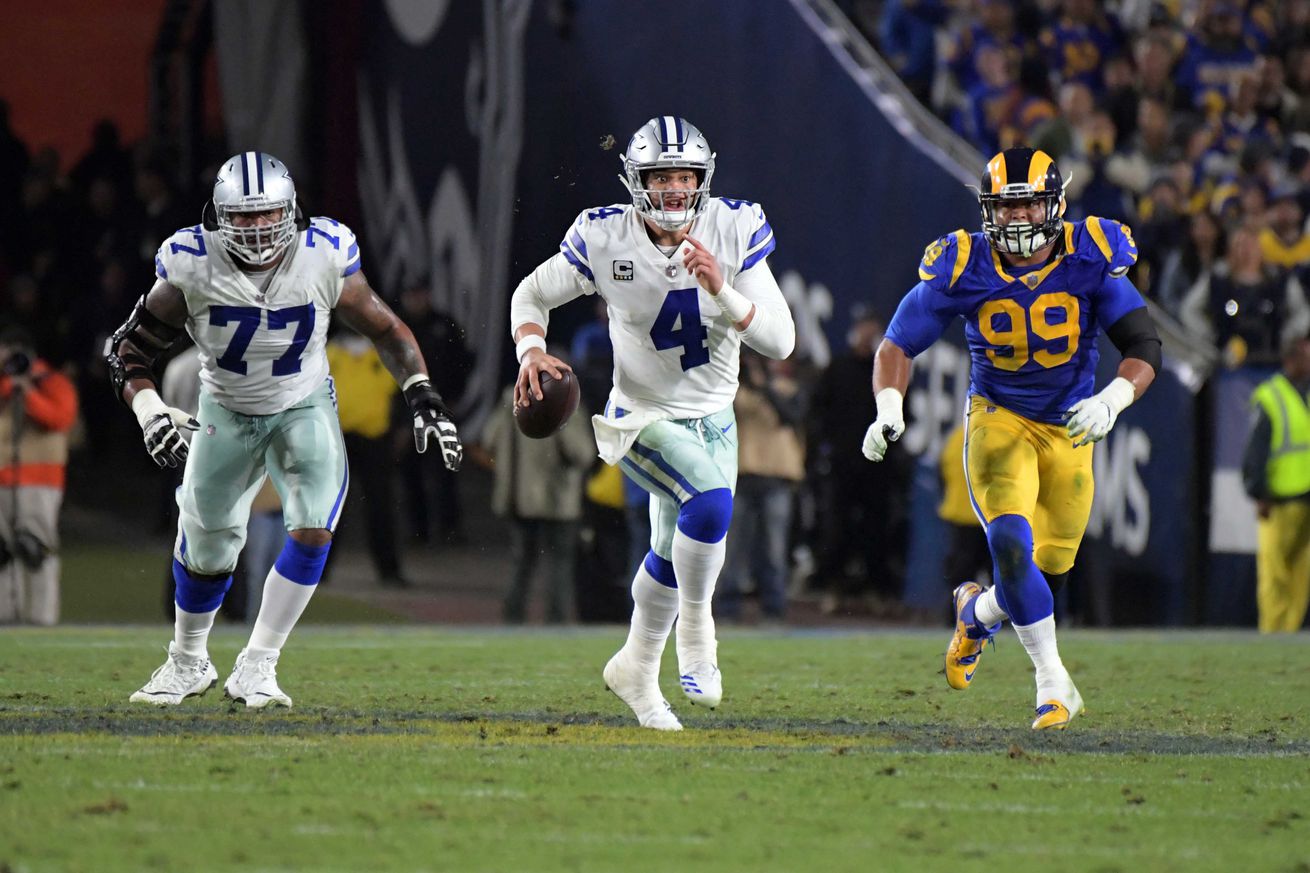 There are a lot of opportunities for revenge in 2019.

It’s revenge week across SB Nation and when you’re a team like the Dallas Cowboys, there are a lot of opportunities for it in both directions.

There are many franchises that obsess over the Cowboys (shout out to the Philadelphia Eagles) and also squads that have gotten the better of America’s Team at times that have left us sad. Teams with deep history have highs worth remembering and lows that should be forgotten.

Most of these situations obviously occur in the postseason which is what brings us here today. Of the 13 teams that the Cowboys will play in 2019, do you know how many they’ve played playoff games against (assuming you didn’t look at or forgot the title)? 10. Ten!

Everybody knows about the lone time that the Cowboys played against the Giants in the playoffs. It’s actually kind of amazing that over their storied history that there’s only been one postseason game between the two.

There isn’t a lot to say about one of the worst losses that most people around here have experienced. The 2007 Cowboys were one of the greatest teams in franchise history to not win the Super Bowl or even appear in the NFC Championship Game. The fact that those Giants would go on to win Super Bowl XLII makes things sting all the more (unless you preferred that to an undefeated Patriots season).

The current day version of the G-Men are often still made fun of for their trip before their last playoff game. Nothing will ever be a bigger stain than the Cancun trip. Ever.

That was one of the greatest two week runs ever for a Cowboys fan. Beating the Eagles twice within a seven-day stretch, both of which were at home, with one of those wins being in the playoffs is among the sweetest nectar that a lot of us have ever tasted. It was an incredible validation for not only Romo but the likes of Jason Witten, DeMarcus Ware, and even Wade Phillips.

Unfortunately, the Cowboys have never beaten their little brother in our nation’s capital in games beyond the regular season, what’s worse is that the last one they played in was with a ticket to the Super Bowl on the line (a Super Bowl that Washington went on to win).

Truth be told, there haven’t been a whole lot of ridiculously intense games against Washington as of late, making rare opportunities to get revenge. The 2012 season was an unfortunate one as Robert Griffin III had his rookie year and swept the Cowboys, including a win in what was effectively a playoff game, but that was short-lived.

Younger fans of the Cowboys have a deep hatred for the Green Bay Packers in large part thanks to two of the team’s most recent three playoff losses.

Aaron Rodgers and Co. were on the right end of the ridiculous call in the 2014 Divisional Round when Dez Bryant definitely caught it, and unfortunately Jared Cook also caught it two years later in the same round and converted a much-needed third down. Blah blah blah.

It would be quite nice to see the Cowboys have postseason success against Green Bay, but they’ll have to take care of matters in the regular season first. Last time they tried to do even that they were bested once again by Aaron Rodgers. Ugh.

Many people have looked to the Cowboys’ last playoff game against the Chicago Bears when they try to gauge future success for the current version of the team. After all, it was that win against Chicago back in 1991 that gave the dynasty to-be their first taste of playoff success.

The Bears look to be back (potentially at least) and playing them late in the season in Chicago will be quite the chore for the Cowboys (it didn’t go so well six years ago). They’re not a team that “revenge” is often associated with for Dallas, but perhaps that’s because the Cowboys are undefeated in the playoffs against them. Oh well.

If 2009 was validation for the Romo-led Cowboys then 2014 was vindication. After the team had lost all three of the “effective” playoff games in Weeks 17 of the seasons prior, getting the monkey off of their collective backs was quite the relief.

Dallas fell down early against the Lions but battled their way back for an epic victory. The game featured perhaps Jason Witten’s most-famed “Y Option” route and the first true highlight for the now-highest paid player in franchise history, DeMarcus Lawrence.

Don’t worry about whatever penalty that Lions fans say should have stood. It doesn’t matter!

It’s been a decade, but it’s still strange to think that the last time Dallas played the Minnesota Vikings of all teams in the playoffs that Brett Favre was their quarterback. Crazy.

Favre himself had quite the revenge game earlier that season against the Green Bay Packers (must be nice), and on that fateful day his Vikings squad was just too much for a Cowboys team that was only learning how to win in the postseason.

One of the NFL’s most historic moments happened between the Cowboys and Vikings thanks to the Hail Mary. It’s unlikely that we see one of those from Minnesota’s current quarterback in Kirk Cousins, so they’ll just have to find a different way to try and get revenge.

It’s not difficult for Cowboys fans to remember the last time the team played a playoff game against the Rams as it was literally the last game that we saw them play, period. Dallas saw their season end about half a year ago at the hands of the Rams that would eventually lose Super Bowl LIII.

There is definitely revenge to be had here as we’re talking about something very recent. The Cowboys will play the Rams at home in 2019, but another playoff matchup could be in the cards if things shake out a certain direction.

Hopefully the interior of the defensive line is ready this time.

People love to talk about how the 1972 Miami Dolphins went undefated and won the Super Bowl. Do you know the last game that Miami lost before that run? Super Bowl VI to the Dallas Cowboys.

America’s Team won their first world championship thanks to their victory over the Dolphins, it’s one of the greatest wins in franchise history for obvious reasons. The teams have never met again in the ultimate game, but they’ve certainly had some interesting regular season rematches ever since.

Let’s get revenge for Leon Lett. That’s worth fighting for.

Tony Casillas is one half of The 75O in the Blogging The Boys podcast feed, and he was also one part of the Cowboys teams that defeated the Buffalo Bills in two straight Super Bowls. That’s always fun to talk about.

Buffalo lost four straight Super Bowls and half of them to the Dallas Cowboys. It will never not be fun to talk about as long as time continues on, bring it up every chance you get.

Speaking of chances though there is an opportunity for some revenge in 2019’s game against the Bills. Cole Beasley defected towards Buffalo in free agency and has taken every conceivable chance ever since to hate on his former team.

The only teams that Dallas plays in 2019 who they haven’t met in the playoffs before are the New York Jets, New England Patriots, and New Orleans Saints. They would all be “new” revenge opportunities (sorry, I had to).

Amazingly the Saints are the only NFC team who the Cowboys have never met in the playoffs. If anyone has an opportunity for revenge it’s likely New Orleans as Dallas had one of the biggest wins of the 2018 season over them. That’s likely going to be on their minds.