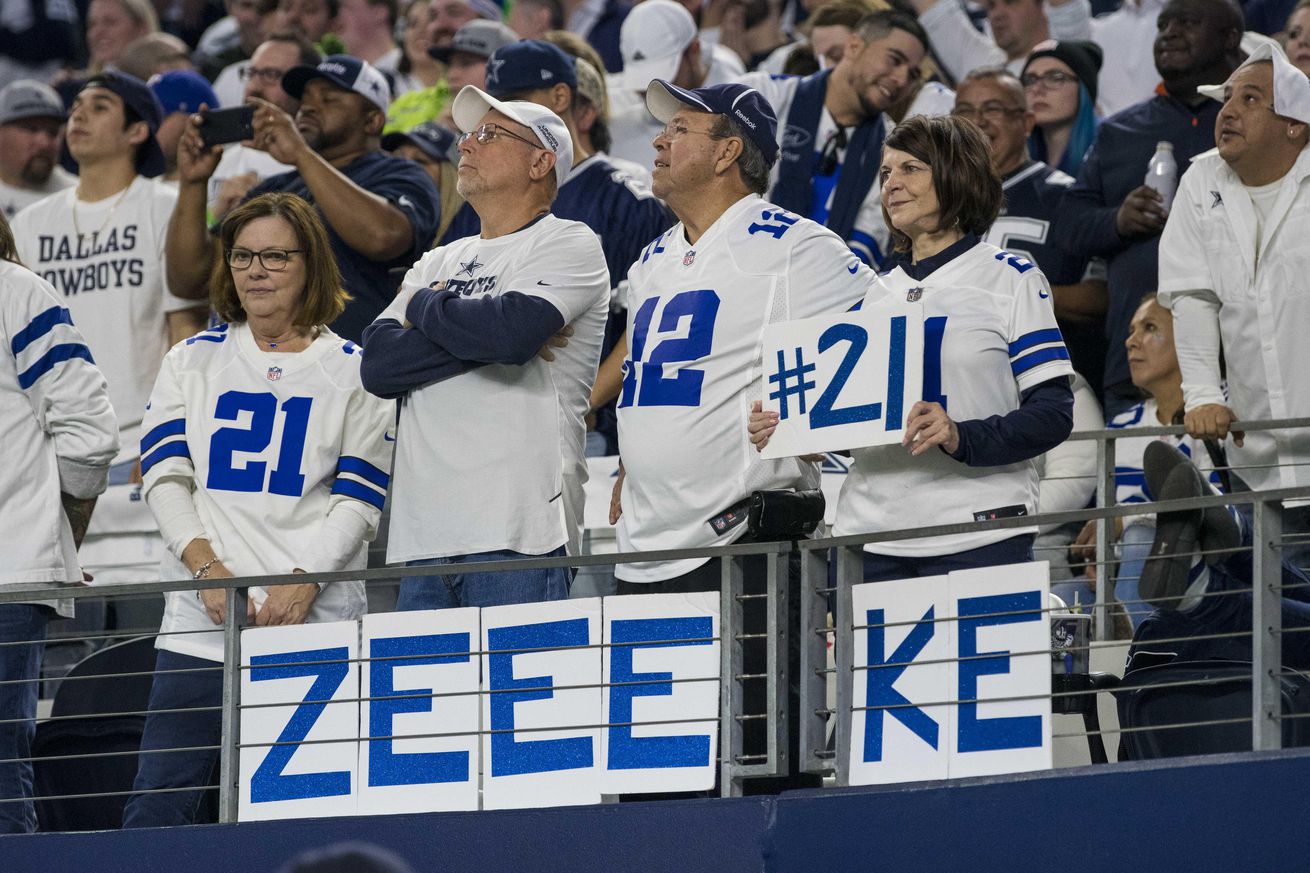 Arguments abound about just how valuable the star running back in Dallas is, but most of them are kinda about the wrong things.

Hey, you want to start a fight on social media, particularly that segment focused on a certain well-known football team? Just put up some version of this: “Ezekiel Elliott is/is not the best/most valuable/most important player for the Dallas Cowboys.” Then sit back and watch the fireworks. The responses will probably be fast and furious. It is the 2019 version of “Tony Romo is/is not elite” or “Jason Garrett is/is not just a puppet”. It has even largely supplanted “Dak Prescott is/is not a legitimate franchise quarterback”. Almost everyone has an opinion that will be forcefully stated. Almost all of them are kinda wrong. And kinda right.

After a few months of watching and participating in these debates, it occurs to me that very few look at all the factors involved, much less the real implications for the Cowboys. There are multiple components to this, but most of the participants in Twitter scrums and such are generally focused on one aspect. That isn’t the only problem. In some cases, different participants in this mess aren’t even defining their terms the same way.

I don’t know if I can explain all this satisfactorily, but it is also a subject that doesn’t do well with 280 character comments or the lack of manners and civility in social media. So here is my contribution that will hopefully at least make you stop and think.

Is Zeke the best player on the Cowboys?

Probably. From a standpoint of ability, athleticism, power, speed, durability, his influence in the locker room, or whatever else you want to throw into the mix, there is no other player on the roster who clearly exceeds what Elliott brings to the table, and few that can even pull up a chair to be in the conversation. The only possible knock on him is his frustrating habit of getting involved in off-the-field kerfuffles, and that really is a bit of a separate question from being the best football player on the team.

However, many confuse that with a very different questinon.

Is Zeke the most important player on the Cowboys?

Uh, no. That is Dak Prescott. Not because Prescott is a better player – he’s good, but he is not in the argument for being a generational talent like Elliott is – but because he is the quarterback. And in the NFL in the year of our Lord two thousand and nineteen, one of the unalterable rules of nature is: “The starting quarterback is the most important player on any roster for any team at any time.” That is true whether the QB is Tom Brady or Brandon Weeden. If he is good, the team will most likely win a lot of games. If he is not good, it is time to get a high draft pick to replace him.

I mentioned the year, because this was not always the case. Back in the medieval era (the 1950s), running backs might have been the most important players, at least on some teams. The best example of this is Jim Brown. You may find this difficult to believe, but with Brown as their running back, the Cleveland Browns were a power in the NFL, They won four league championships from 1950 through 1964, And that 1964 title was largely due to Brown, who had 280 carries for 1,446 yards and seven touchdowns (in a time where scoring was generally less). That averaged out to 103 yards per game, 20 carries, and 5.2 yards per attempt. He was basically half the offense by himself when you add in the 340 yards and two TDs he had as a receiver. This was for a team that had almost as many rushing yards as passing, and far more rushing attempt than passes (432 to 344). Of course, when your quarterback is only completing a little over half his attempts, wide receivers were still basically being mugged all over the field, and roughing the passer was generally not called unless blunt objects were used, you might want to lean to running the ball.

That was, of course, ancient history. The problem we have today is that there are still some who seem to carry some remnants of that kind of football thinking. And that includes head coaches, owners, and GMs, who wax eloquent (or at least loud) about “establishing the run”. (We will look deeper into that in a bit.)

But the game is almost entirely different. Quarterbacks, particularly that Brady fellow, are sometimes seen as inviolable beings. Pass defenders have to be very sly to make much contact past five yards down the field. And passing is king. Last season, teams averaged 238 yards and 1.7 touchdowns per game through the air, while only putting up 114 and 0.9 respectively on the ground. The rules and the talent involved have turned offenses on their head.

There is an argument to be made that Elliott is not even the second-most important player on the offense. Our own Connor Livesay brought this up about 2018 in one of those Twitter exchanges.

So… then what happened before Amari got here? They were on track to pick in the top 10 with a fully healthy/fresh Zeke. I can also say I do not think that your poll results would be accurate but I like the conviction.

There is little argument against the contention that the trade for Amari Cooper saved the season for Dallas. And as noted, the team was floundering without him, but with a healthy Elliott on the field.

So what is the real role of Zeke and the running game?

This is a rather complex topic, and first we have to look at the current analytics argument that passing on first down and second and more than three yards to go is more valuable than running the ball.

Without diving deep into the data, here is a summation: If you throw the ball on first down or second and three or more, you are more likely to convert and get a new set of downs AND score on that drive. No matter how you slice it, that is what the number say, over and over again.

A lot of people, both inside the game and out, bristle at that. But to say passing is more valuable to the team in those situations does not say that you can always just drop back, or show that a pass is coming through personnel and formation. If a team does that, the defenses will counter with all-out pass rushes and covering the pass while largely ignoring the run, therefore reducing the success rate for the offense. No, the run game still has to be a threat. After all, if you can catch the defense selling out to stop the pass and block it up well, you can spring the back for a nice gain, maybe even a 10+ yard chunk play.

There are other places where the run, especially with a good offensive line to block, can be very valuable. Any down with short yardage to go, including fourth-and-one, can be great times to call a run, especially if you use your personnel and formation to keep a passing option viable so the box isn’t loaded up. Any time you have a big lead, running the ball can keep possession and eat up clock, especially later in the game. The fourth quarter can also be when the defense gets worn down and those running lanes get a little wider.

So the running game is still important. The issue really is using it correctly.

Wait, does that mean that it comes back to Kellen Moore?

Yep, it does. Part of the problem last season – arguably the biggest, once Cooper helped solve the issues at receiver – was the play-calling. Almost all of us became sick of seeing teams read the formation and personnel to load the box up and stop Elliott for little or no gain. Fixing that is perceived as the main job for new offensive coordinator Moore and his fresh ideas.

That is just as important for Elliott and the running game as it is for Prescott and passing. It is clear that Elliott was badly misused at times last year. The hope, even expectation, for Moore is that he will get more out of both phases of the offense. And there is evidence that is clearly part of the plan. There were some tweets in the first couple of weeks of OTAs about spreading the field and then running the ball. Don’t look for them now because they were taken down. It seems that Moore is up to something good, and the team doesn’t want attention drawn to it.

Elliott is a tremendous weapon. But he is a weapon that you can’t use in the wrong situation. And he has to be used fully. What that means is that he was not only misused in the running game, he was underused as part of the passing attack. He is a great protector for Prescott, but he can also be a potent weapon if you get him the ball with some space to work in the secondary. He needs to be used for more than screens, although he can also break a big one that way as well. But he can also be split out, and that is a prospect that might terrorize some defensive backs. He can also work his way out and become a receiver that way.

He is a great tool to have. Now Moore just needs to show he has the needed skill in employing him.

So does Zeke get paid?

Again, that is a rather complex question, but let’s keep it simple. The team can pay him, even while taking care of other priorities like Prescott and Cooper. They have shown that they can manipulate the accounting trick known as the salary cap to do whatever they need to. And they need to keep Zeke.

An NFL offense is not just a group of separate pieces, but an interconnected machine. And as with any machine, you have to have the right parts. The better the parts, the better the performance. A team should not discard a great part for a merely good one. If used properly by his offensive coordinator, he can still be a devastating force.

The identity of the Cowboys has been described by their senior leadership as being built around running the ball. That can still be true, even if they use the pass more effectively. Elliott is still a threat any time he is on the field that the defense has to try and account for, especially if he is incorporated more efficiently into the passing game.

Too often, his value has been falsely conflated with the arguments over when and how to throw the ball. It is not a zero sum game. A better, more creative passing game opens up opportunities to get bigger runs. A strong, at times dominant running game makes life easier for the quarterback. The concept of synergy is important.

And so is Elliott.