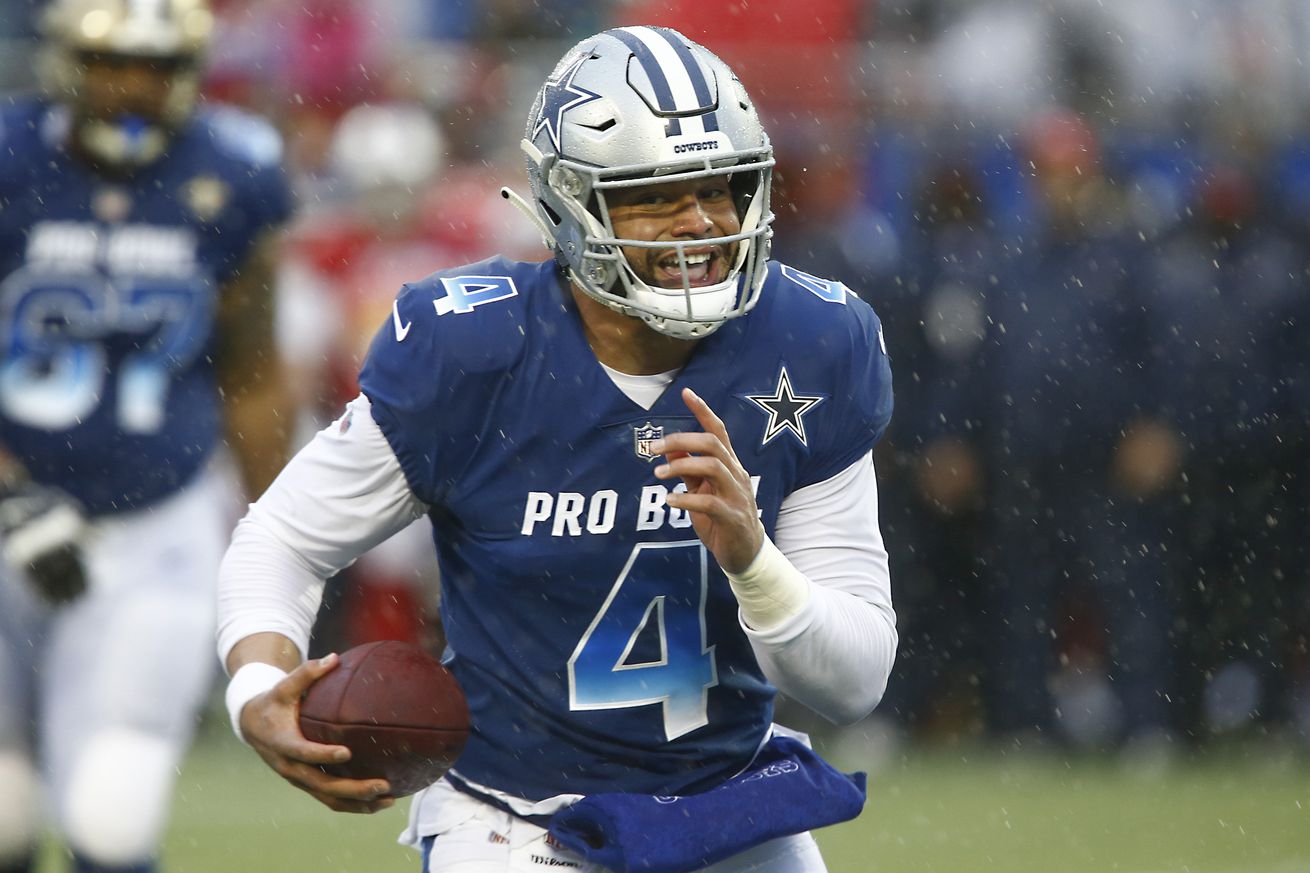 Carson Wentz just got paid. If you’re a Philadelphia Eagles fans, you’re elated to hear the news as the team has their young franchise quarterback under contract for the next six years. The fan base hasn’t been this excited about landing one of the top overall QB draft picks since they traded for Sam Bradford way back in 2015. I’m sure this one’s going to turn out better though.

The Dallas Cowboys are also hoping to lock down their young quarterback as Dak Prescott is entering the last year of his super-cheap, fourth-round-value rookie contract. Jerry Jones and company have clearly expressed that he’s the future, but there’s a lot of money involved so the negotiation process will be quite extensive. And while all that is going on, it’s given us fans plenty of time to discuss whether or not Prescott is worth of a huge $30+ million annual contact.

Recently, the incomparable One Cool Customer provided some great numbers to paint a nice picture showing how frequently quarterbacks around the league had “good games” and where Prescott ranked among them. When it comes to performing well, Dak is actually right up there with the best of them as he has the second best 100+ passer rating percentage in the league, trailing only Aaron Rodgers.

As you can see, the other quarterbacks showing up in the top 10 are all recognized as some of the top passers in the league. Some have already paved their way to Canton and the majority of them have a highly decorated career. They also have a pretty hefty bank account as well.

Another thing interesting from OCC’s data was how good the Cowboys were as a team when Prescott played well. He had the highest winning percentage of anyone in the league when he has a passer rating above 100 at an incredible 95.6 percent. The Cowboys are virtually unbeatable when Prescott plays well.

When you take into account how often Prescott plays well and that the Cowboys essentially win almost all of those games, you might as well lock the team in with minimum of eight wins per season. This isn’t anything to get excited about, but keep in mind – that’s just his floor. What he has shown is that he’s good enough to give this team a shot week in and week out. Is that alone worth a huge contract? No, but it gets better.

One of the great things about Prescott is that even when he struggles, he still delivers down the stretch. By now, you’ve probably heard about how Prescott ranks out as one of the more clutch quarterbacks in the league. When the game is tied in the fourth or overtime, he boasts a 150.5 passer rating. That’s ridiculously clutch.

A deeper dive into Prescott’s numbers show that in games where he’s under 100 passer rating, the Cowboys still win games at a rate of 37.5 percent. That speaks to how he can overcome adversity and still find a way to win games even if his play as a whole isn’t all that great. We saw that in the Atlanta game last year (passer rating = 86.5) when he didn’t throw a single touchdown, but still led the game-winning drive. We saw it in the playoff game against Seattle (passer rating = 83.6) when momentum starting shifting the Seahawks way, but some big time plays from Prescott helped pull out the victory.

When you combine the fact that the Cowboys win almost all of his good-performing games and still pull out a decent percentage of his bad ones, this makes the team a proven winner with Prescott under center.

Prescott doesn’t miss games. He’s played in all 48 regular season games since entering the league in 2016. So, not only does Prescott win games consistently, he’s proven himself durable. With a thick, muscular frame, Dak has demonstrated he can handle the physical contact administered at the NFL level.

The Cowboys did feature Prescott more in the running game as he had 18 more attempts this past season than he did in each of the previous two years. It was enough to move him into the top five in rushing attempts for a quarterback last year. Considering the extra rushing and all the times he was sacked last season, that’s a lot of pounding; however, he has shown great resiliency and keeps on going.

As reliable as Prescott is right now, he is not a finished product. There are still plenty of things he needs to clean up with his mechanics. The addition of Jon Kitna is supposed to help him with those things. Better footwork is needed. Work on making quicker progressions is needed. And just overall pocket awareness can help cut back on some of the sack/fumbles that have plagued him recently. Even a tendency to take more deep shots down the field will help Prescott grow into a more threatening quarterback.

It’s no secret that Prescott has a great head on his shoulders and has shown so much maturity despite being thrown into action as early as he was. He’s not a guy who teammates call “selfish” or “uncompromising” who was verbally attacked by a highly respected teammate for not being “a team guy. He’s not a guy who doesn’t connect with his teammates and identified as a “real locker room problem” by his All-Pro teammates. In fact, he’s quite the opposite.

Prescott’s leadership ability is strong and his teammates respond to him. All his high-character traits point to a guy who clearly is capable of maxing out his ability through hard work and determination. While the end result offers no guarantees, that’s the sort of thing you want to hear from a team with a rising star quarterback.

.@TroyAikman on @Dak Prescott: “He’s a great leader, he’s everything you’d want him to be. I don’t know that there’s a more solid individual in the Natinoal Football League.” pic.twitter.com/ikqHdrJ5QN

Despite having more room to grow, Prescott still checks off a lot of boxes. So, if you’re still unsure if Prescott is deserving of a big contract, just follow this easy-to-use flowchart to see if he meets all the requirements.