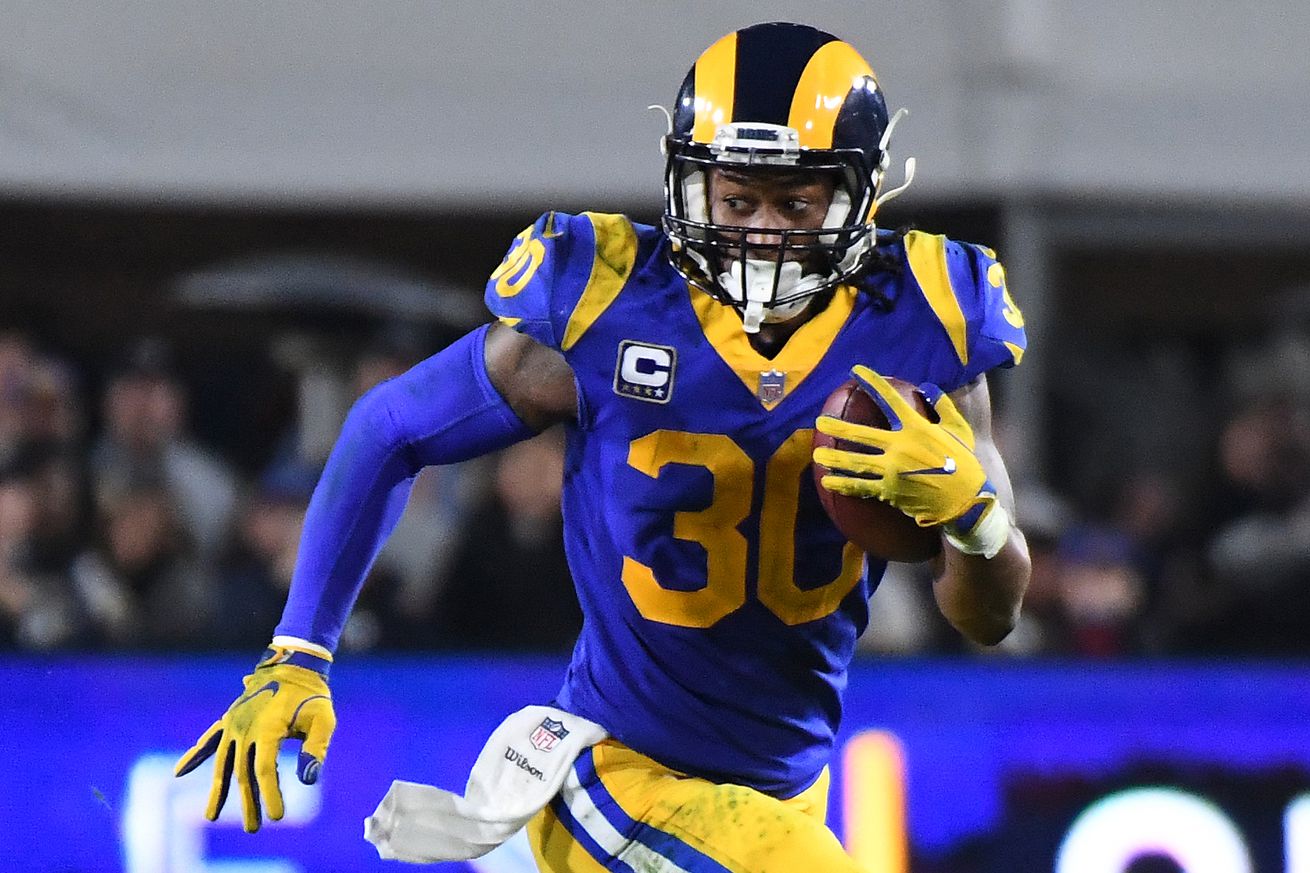 The Rams are experiencing buyers remorse on giving Gurley a big deal. Should this worry the Cowboys when it comes to giving big money to Zeke?

Carson Wentz just signed a four-year, $128 million extension to stick around in Philadelphia through 2024. It’s not shocking that the Eagles re-upped on him, and nobody is surprised by the cost, but the $107 million in guaranteed money brings about quite a bit of risk, considering he hasn’t been able to finish the last two seasons due to injury. If his knee or back keeps giving him problems and he’s unavailable, the Eagles will be in serious trouble.

With such a large portion of their cap being consumed by a high-priced quarterback, they won’t have the money to spend in free agency to maintain their roster. In fact, the Eagles are dead last in cap space next season with over $40 million in the hole (data courtesy of Spotrac.com). Eagles’ Howie Roseman has his work cut out for him next season.

The Cowboys will be signing Dak Prescott to a big deal, and just like that – he’ll eat up a lot of cap space, too. But as you can see, the Cowboys have lots of extra cash as they currently have the third-most space entering next season. They also have several players with expiring contracts and you’ll often hear people proclaim “they can’t pay everyone” as some type of warning call that the Cowboys are about to lose someone important.

While the team does have to be smart about who they retain, the Cowboys have the financial resources to keep their stars – all of them. Dak, Amari Cooper, Byron Jones, and Ezekiel Elliott can all get second contracts if the Cowboys want to sign them. However, just because they can afford to do it, doesn’t mean they should. The front office must continue to be judicious when committing to these high-priced contracts. One small slip up could set the team back, and that’s not what fans want to hear as the team is right in the thick of things for Super Bowl contention.

One of the biggest debates when it comes to who should get a second contract is the value of Ezekiel Elliott and the running back position. Earlier in the year, I already pleaded my case and provided 21 reasons the team should re-sign Zeke. but there are many counter arguments in not handing out so much money to the running back position. A year hasn’t even gone by yet and the Los Angeles Rams are already having buyer’s remorse when it comes to Todd Gurley. Would the Cowboys be wise to learn from their mistake?

After churning out almost 2,100 total yards and scoring 19 touchdowns in 2017, it seemed pretty clear that the Rams had found their new star running back. So much in fact, that the team decided to give him a four-year, $57.5 million contract extension even though he still had two years left on his contract. This made Gurley the highest paid running back in the league.

And for most of last season, it looked like the Rams had gotten a deal. He picked up where he left off from the previous year and was approaching another 2,000 yard season, finding the end zone 21 times. But later in the season, Gurley’s knee started to swell up and he was held out of the team’s final two games. While he looked fine in the divisional game against the Cowboys, he was non-existent in the NFC Championship game as well as the Super Bowl, combining for 14 carries for just 45 yards in the two biggest games of his career. Something was clearly wrong.

And as Mike Florio reports, the knee is a big concern for the Rams.

Gurley has a knee issue that generates news on a near-daily basis. Most recently, Rams radio analyst Maurice Jones-Drew said that the knee bothered Gurley all year long, injury report be damned. That caps a week in which it became clear that the Rams won’t use Gurley at all in the offseason, that the knee truly is “a concern,” and that he’s trying to lose weight in order to reduce the wear and tear on the joint.

As a practical matter, there’s not much the Rams can do about the situation because, as a financial matter, they’re bound to Gurley at least through 2019. Come 2020, a significant decision will have to be made.

Gurley tore his ACL during his last season in college, but it didn’t deter the Rams from making him the 10th overall pick in the 2015 NFL Draft. Unfortunately, that knee has become problematic again, and one can’t help wondering what the future holds for Gurley. And the Rams are wondering that too because despite having limited premium draft resources (they didn’t have a first-round pick), they still used their 70th overall pick to select one of the top running backs in the draft in Memphis’ Darrell Henderson. Just like that, they have some fresh young legs on the roster.

The Rams may have protected themselves on the field, but financially – they still have a big problem when it comes to Gurley’s contract. If his knee continues to hinder him, they can’t keep paying him that type of money and will eventually have to cut their losses. It’s bad luck for sure, but is some of this luck self-inflicted? The knee issue he had in college wasn’t a surprise, and we all know that the running back position is brutal on players. Do the Rams only have themselves to blame for this?

That’s what many Cowboys fans are worried about when it comes to offering Ezekiel Elliott a big contract extension. Zeke doesn’t have the durability issues that Gurley has, but he endures such a huge workload. Elliott already has over 1,000 touches over just the first three years of his career and let’s not forget that he was used extensively over his last two seasons at Ohio State. When is this type of mileage going to take a toll?

The Cowboys drafted Tony Pollard to help give the offense another running back weapon (Pollard also backed up Henderson at Memphis). Maybe this will alleviate some of the workload. Then again, what if Pollard shines in this offense? What if Kellen Moore’s new offense isn’t so heavily reliant on Zeke? Would the Cowboys still feel compelled to throw $15+ M annually at Zeke? These are certainly things to consider and the upcoming season might shed some new light on who’s valued the most in Big D.

Elliott is the heart of this offense and it’s not pleasant to entertain the idea of him not being a part of it, but it’s important to look at all aspects closely. One of the main reasons the Cowboys are going to stay competitive for years to come depends on them getting great value for their contracts. Right now, the Cowboys biggest competition in the NFC features a team with a 40-year old quarterback (Saints), a team that’s soon to be in a big hole financially (Eagles), and a team whose third-highest paid player is a running back who now suddenly has some serious health concerns (Rams). The Cowboys have worked hard to get themselves out of the first two predicaments, which makes their future outlook a lot more promising than their NFC competitors, but would they be wise to avoid all three?

Every situation is different. The Eagles and Rams have thrown a lot of money at their stars, but both bring with them a lot of risk. Maybe the Cowboys don’t have those same concerns. I guess we’ll find out soon enough.

Carson Wentz and Todd Gurley have the largest amount of guaranteed money in the league for their respective positions. They have also each tore their ACL and missed games in two different seasons.

Total games Dak & Zeke have missed due to injury: 0