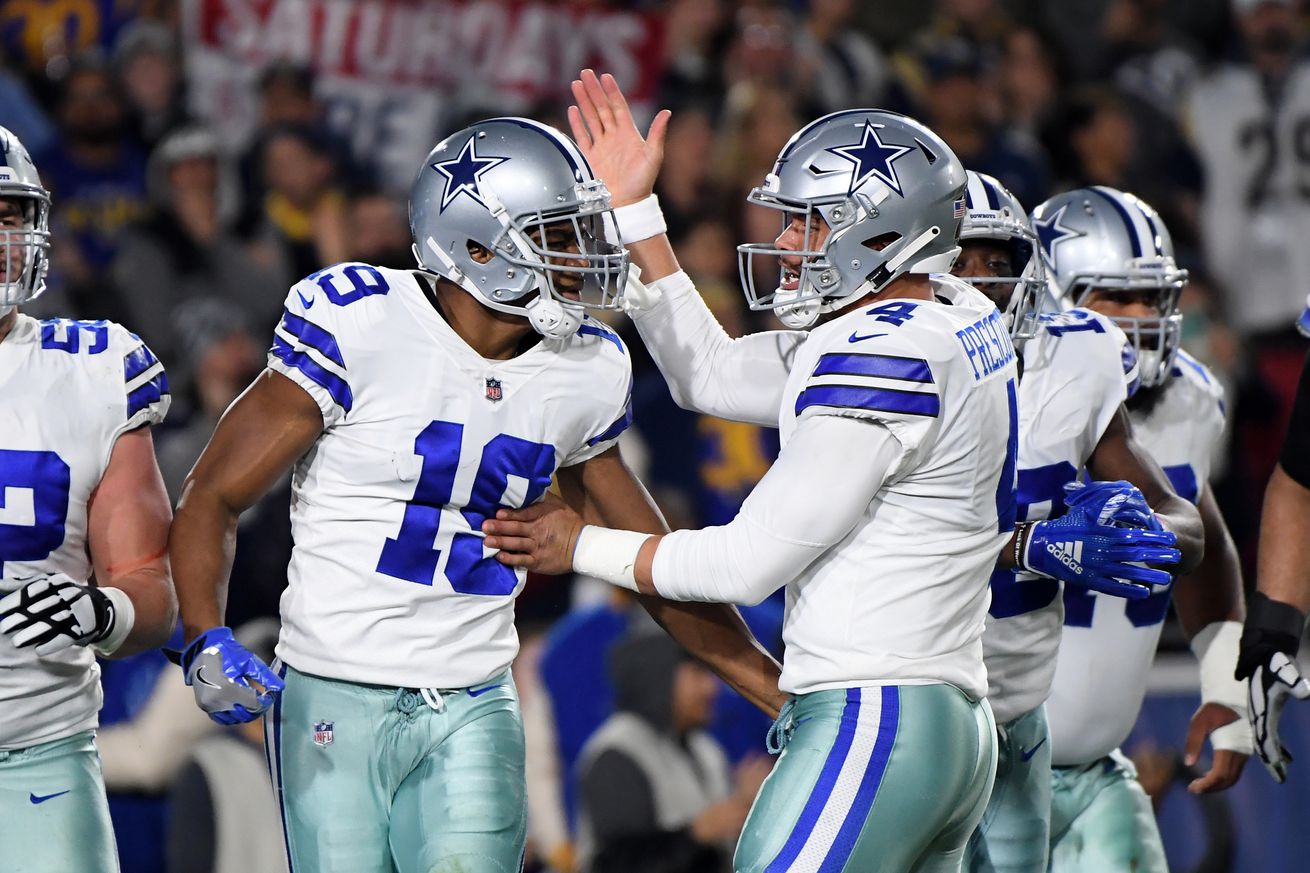 The reports make it hard to rein in the enthusiasm.

Cowboys minicamp: Kitna praising Dak – ‘He’s a rare individual’ – Mike Fisher, 247 Sports
Nobody has anything bad to say about Dak Prescott’s performance so far. And QB coach Jon Kitna sees a lot more than just what happens in reps.

“He wants to be the best,” Kitna said after a minicamp workout here inside Ford Center at The Star, comparing his obvious want-to to that of Dallas icon Jason Witten. “A lot of people say that. I just feel like you can watch somebody. You don’t really care about what they say. Just watching people. … He doesn’t need to be poked and prodded but he wants to be poked and prodded and pushed. So it’s fun.”

Kitna downplayed repeated questions relating to his “relationship” with his players as quarterback coach (though, honestly, one of Kitna’s great strengths as a teammate was very much about that — his ability to relate, communication and connect with every corner of the room). He chose on Tuesday to note that he’s here to work with all the QBs, to help all of them get better.

But Dak, obviously, is the most “rare” of them.

Scout’s Notebook: Armstrong Ready For Big Year? – Bryan Broaddus, DallasCowboys.com
Here is the first observation from this report, but you must go read the whole thing. It is mandatory. Attendance will be checked.

These coaches have to be happy with what they’ve seen from Dorance Armstrong during these practices. Armstrong has been mainly filling in for DeMarcus Lawrence on the left side, but on Wednesday he switched over to the right. There were several snaps where he was a handful for Cam Fleming to handle. Armstrong started off well last season before hitting the rookie wall. He physically looks bigger and is also now equipped with the knowledge of how he has to prepare to play at a high level the entire season. Keep an eye on Armstrong to make that jump from the first to second year.

Cowboys tapping into Amari Cooper’s ‘gifted’ potential – Todd Archer, Dallas Cowboys Blog- ESPN
He made a huge difference last year, and Amari Cooper looks like he will do the same this fall.

Quarterback Dak Prescott’s short pass to Amari Cooper was perfect, right between the 1 and 9 on his jersey, but the Dallas Cowboys’ wide receiver wasn’t happy with himself since he had to grab it twice.

Cooper wants perfection. All the time. Even in an organized team activity in May.

“Amari can do whatever he sets his mind to. He’s that gifted,” receivers coach Sanjay Lal said. “Not just physically but mentally. With Amari, it’s can he do everything at an elite level? That’s where the mind discipline comes in because he has the talent to be elite in every aspect of his game. He’s such a great athlete, such a really good player, he has to hold himself to a standard of, ‘Hey, I’m elite. I’m going to play and practice that way,’ and I have to hold him to that standard. What is your level of play and can you keep it there for 50, 60, 70 plays?”

What Has Amari More Anxious Than New Deal? – Nick Eatman, DallasCowboys.com
Dak Prescott and Amari Cooper had things to say about thing with Kellen Moore at OC. And Imma keep beating this drum until it breaks.

Prescott has been openly supportive of new offensive coordinator Kellen Moore and the system he is installing, and Cooper echoed those sentiments on Wednesday.

“I love it. I even loved the offense last year,” Cooper said. “With Kellen, I still love it. I think it gives me an opportunity to display my skill-set with the type of plays we run. He’s obviously a good coach. He’s a young guy and we can relate to him a lot and come up to him and talk about certain things.”

When asked if the plays have been different, Cooper said what other players have mentioned this summer, stating that the biggest differences occur before the snap.

“It’s not a whole lot different. Its just small variations,” Cooper said of the new system. “We’re really running the same plays, but we’re disguising them.”

Jason Witten should be plenty familiar with Dak Prescott’s skill set by now, having played two full seasons with him. But returning from a yearlong retirement, Witten said it’s obvious that Prescott has grown by leaps and bounds since he left.

“He’s always been a great leader and how he’s gone about it, but he sets the tone for this football team and you can see the improvement,” Witten said. “I know I can, from being away for a year, with how much he’s improved with his game as a quarterback.”

Witten said Prescott has been fantastic during the offseason program, leading the first-team offense through 10 crisp practices to this point. When he was pressed for details about that improvement, he cited the various ways Prescott has improved as a passer.

“I just think, from my perspective, the accuracy has been unbelievable with throwing to us,” he said. “The velocity on the ball, the anticipation of the throws. We run certain routes and nobody notices it, but that ball is coming out – when you’re coming out of the cut, the ball is already on you.”

Can Kellen Moore Have a Kris Richard-like Coaching Impact With Cowboys? ✭ Brian Martin, Inside the Star
I believe we all can agree with this sentiment.

I don’t know about you, but I’m really hoping Kellen Moore can have a Kris Richard-like impact now that he is taking on more responsibility within the Cowboys offense after serving as the Quarterback Coach to Dak Prescott last season. I’m expecting Moore to be a breath of fresh air, much like Richard was as soon as he stepped foot in Dallas.

Although Kris Richard wasn’t the official Defensive Coordinator of the Dallas Cowboys, he handled a lot of the job responsibilities that comes with the title. He worked hand-in-hand with Rod Marinelli week after week with the game plan, and also took over the playcalling on game days. As a result, we saw the Cowboys defense elevate their game in 2018, something we are all hoping Kellen Moore can do on the offensive side of the ball.

Allen Hurns returns from gruesome injury. knew he’d make it back – Todd Brock, Cowboys Wire
Allen Hurns has a fight on his hand to make the roster out of the crowded WR group in Dallas. But as he notes, that is a good thing for the team and their fans.

He would seem to be just the type of Swiss-Army-knife player the Cowboys have been working to stockpile, even though he’s perhaps flying a little under the radar now thanks to recent acquisitions like Randall Cobb and Tony Pollard, players with similar talents for multiple positions.

“You’re probably looking at a roster on offense, across the board, probably the most stacked we’ve been across the board. Tight ends, receivers. With Kellen, he brings a lot of things to being offensive coordinator. He’s very versatile, a guy that’s very smart. He puts us in great situations, especially with a guy like Cobb. I feel like that’ll be a great transition for us. And we got Witten back. I feel like it’ll be great. We’re not going to be limited.”

Donovan Wilson has a Chance to Impress with Kavon Frazier Setback ✭ Matthew Lenix, Inside the Star
Injuries and having to recover always suck for players. But one man’s travails can be an opportunity for another.

Fellow safety Kavon Frazier will be sidelined for the next few weeks after having arthroscopic surgery on his knee. This setback could see him rehabbing and resting until training camp in late July, and missing the upcoming mandatory mini-camp. This comes at a not so ideal time for Frazier with this season being a contract year and having not yet proven himself on a consistent basis that he’s anything more than a solid backup and special teams player. He’s ultra-competitive and has spent time at both safety spots in his first three years, but potential only gets you so far, you have to show and prove when called upon.

With this being said, now the door is wide open for Wilson. He has the position flex that is much salivated over by Jason Garrett and the coaching staff. In addition to playing safety, he spent a lot of time at nickel corner at Texas A&M as well. He can play down in the box versus the run just about as well as any safety entering the league this season, as evident by his 21.5 tackles for loss in college. Sprinkle in eight interceptions and you can see why the Cowboys turned in his draft card in the sixth round.

5 NFL players ready to break out in their 4th season this year – Charles McDonald, SBNation.com
It’s always cool to see a Cowboy make lists like this. But this does leave out how Maliek Collins has struggled with injuries. If he stays healthy, this is a much more likely possibility.

Maliek Collins is close to being a great defensive tackle, but he hasn’t quite broken out yet.

Collins has developed into one of the better pass-rushing defensive tackles in the NFL. According to Sports Info Solutions, he ranked 25th in pressure rate out of the 81 defensive tackles with at least 150 pass rush snaps.

Where Collins can improve is converting those pressure opportunities into sacks. He ranked 33rd in sack rate in that same sample size of defensive tackles. Through three years, Collins hasn’t been able to top five sacks in a season, which he did as a rookie.

Dallas Cowboys: Dak Prescott’s 5 best throws of 2018: Cowboys QB hits the bull’s-eye with no room for error | Jon Owning, SportsDay
Owning is fighting to debunk the idea that Dak Prescott is an inferior passer. And doing so beautifully.

Because the safety stays with Cooper, Prescott makes the right decision to zip the ball to Beasley for the 21-yard pass. Prescott’s throw was picture-perfect, leading Beasley away from the coverage but still giving him enough space to get both feet in bounds. If Prescott led Beasley less, the defensive back would have been able to contest the catch, and if Prescott left Beasley any more, he may not have been able to get both feet in bounds.

There is no longer a distinction between left tackles and right tackles – Ross Tucker, The Athletic
This only relates to the Cowboys in a general way – but if you want to be smarter about football, it is well worth your time.

It means you better have a right tackle who can pass protect and not play like a slower-footed ogre like some teams have put out there. Look at the teams that went far in the playoffs last year and you quickly realize they all had very good right tackle play. It’s become a premium position in a passing league focused on affecting the quarterback even if the salaries haven’t all caught up to that reality yet.

It also means that if you hear someone continuing to make a distinction between left and right tackle you should probably stop listening to them because their thinking is outdated.