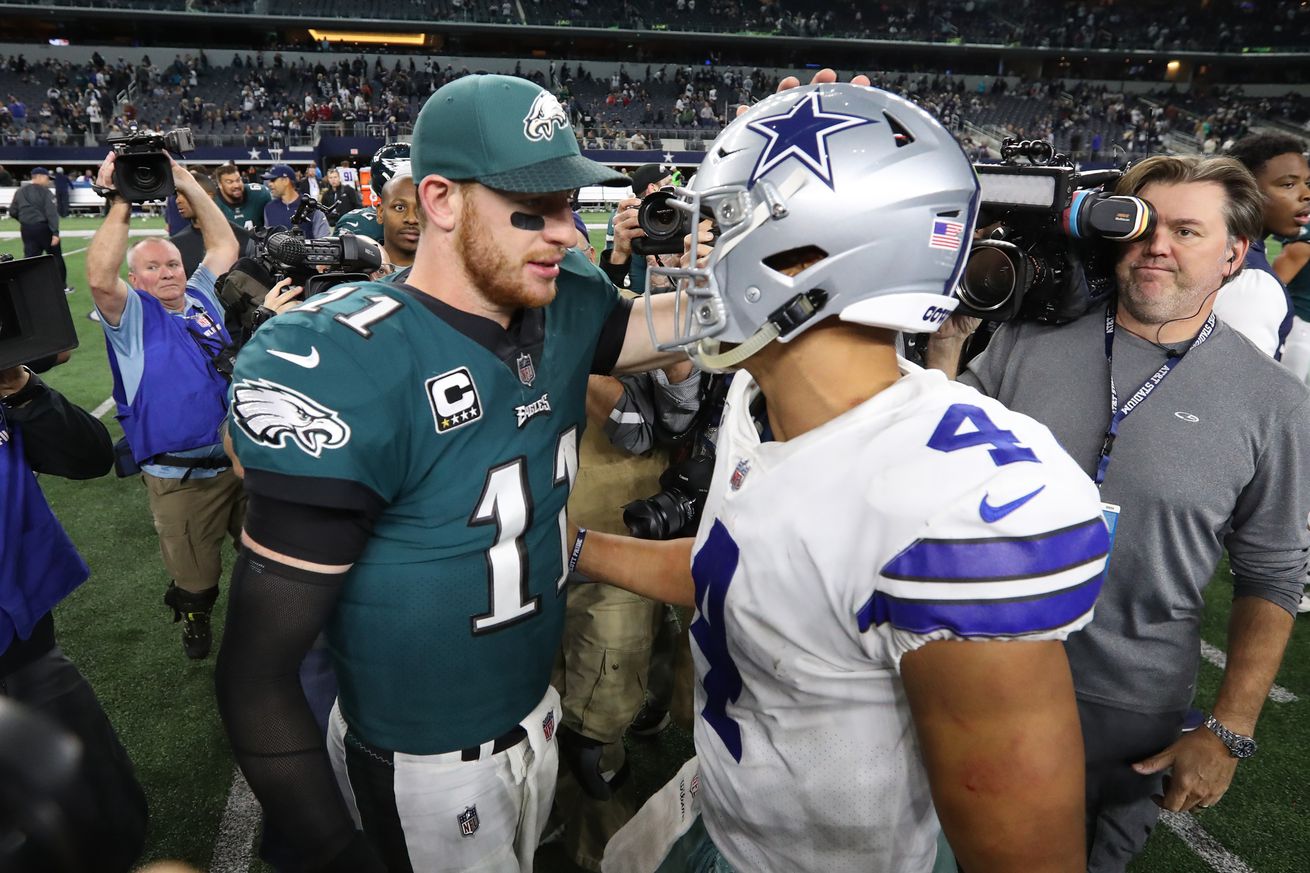 Carson Wentz mega-extension in Philly that will certainly have a bearing on Cowboys talks with Dak Prescott.

How Carson Wentz shaped the Cowboys’ quarterback decisions, how he’ll influence another one soon –Bob Sturm- The Athletic
Dak Prescott and Carson Wentz have been linked since the Eagles traded up for Wentz and Dak fell to Dallas. Soon, Prescott and Wentz will be linked up by their contract extensions, too.

First: Do they regret not having completed Prescott’s deal before the Eagles and Wentz “reset the market?” They must now understand that the Wentz deal — four years at $128 million, $32 million per season or $2 million per game — will absolutely affect their own quarterback’s negotiation. Whether the Dak Prescott contract was almost done or not, Wentz now provides another point of comparison. The Eagles quarterback landed a $107 million guarantee, roughly 84% of the full deal.

This deal won’t set in for another two years, in which Wentz will count for nearly $8.5 million on the books in 2019 and almost $22.8 million in 2020 via a fifth-year option. The Eagles were able to use these two seasons to their advantage to strike a deal which might look very reasonable by the time 2021 arrives. I know it seems ridiculous to imagine $32 million per season being a bargain, but the evidence is on my side regarding the swift changing of the QB pay landscape. There is real value to doing these deals sooner rather than later.

“It happens when it happens,’’ Prescott said from the final day of Cowboys mini-camp. “I’ve got my Cowboy hat on so I’m a Cowboy, let’s say that.’’

The Cowboys quarterback offered a few weeks ago that the two sides had exchanged proposals. He was much less definitive Thursday, acknowledging he’s involved but saying no more than the negotiations stand where they stand.

Cowboys’ Legend Michael Irvin all in on deal for Dak Prescott -Clarence Hill- Fort Worth Star-Telegram
The playmaker, Michael Irvin, reminded the media that Dak deserves every penny as leadership ‘ain’t easy to find’.

But the Cowboys have acknowledged he is worthy of a new deal after severely outperforming his contract as the team’s fourth-round pick in 2016. He has started every game over the last three years, leading them to 32 wins, two NFC East titles, two trips to the playoffs and a playoff win.

Prescott has proven himself as the team’s QB to Irvin.

“There’s no doubt in my mind Dak is the right guy,” Irvin said to reporters at the Cowboys headquarters on Wednesday. “Look at these teams: I mean, people stop it. Look at these damn teams. Dolphins, Jaguars: They’ve been looking for a quarterback for almost 15-20 years. This ain’t easy to find. It’s not easy to find and you don’t let one walk out the door if you got one.”

“I’d say this is the best I’ve felt,” he said. “Who knows – is it three years under my belt or just seeing defenses a whole lot more clear, being quicker and faster in everything I want to do, having great teammates around me? Who really knows the answer, but I feel great. I feel confident, and my teammates do, as well.”

One theme through this week has been footwork. Kitna said Wednesday that Prescott can throw the ball “through a Froot Loop” when his feet and shoulders are in the right spot. Unprompted, Prescott mentioned that fact when asked about his improvement this offseason, but he also said he’s seeing the field much clearer than before.

“When you’re playing the same guys over and over again, and you’re getting better, they have good days, we have good days, you’re getting the best of each other, tensions raise,” Prescott said. “But he’s one of my best friends and that was just a heat-of-the-moment deal and just showing that I’m not going to take anything.”

Prescott said he and Heath talked afterward and laughed about it. Neither would expect any less fire, he added. Contact is limited during minicamp practices, which concluded Thursday. Players can’t compete one-on-one until training camp practices begin July 27.

But that level of competition is what coaches want, Jason Garrett said. Garrett lauded Prescott for balancing “great leadership skills” with being a “natural competitor.” Since becoming the Cowboys’ starter as a rookie in 2016, Prescott has claimed 14 regular-season game-winning drives. No NFL quarterback has posted more in his first three seasons. Coaches and teammates look to nurture that competitive spirit.

Observations from Cowboys minicamp: Amari Cooper’s impressive grab, Dak Prescott’s Stetson, and more | SportsDay
During minicamp practices, Dak Prescott has been sharp but so have his receivers.

Jason Witten caught what looked like a TD in the back left corner of the end zone from Dak Prescott in team drills. Official said he was out. Witten joking on the sideline after: “Hey, where did we get these refs?”

Today was probably the most impressive jump-ball grab we’ve seen from Amari Cooper. Pulled it down with Anthony Brown and Xavier Woods defending

Cowboys’ WR Amari Cooper focused on football, not contract- Todd Archer -ESPN
Amari Cooper knows that his contract situation with the Cowboys will work itself out and that football is his primary focus.

While other players in contract years have opted to skip voluntary organized team activities or the mandatory minicamp, Cooper has not missed a day.

”I just want to get better and I love football. That’s why I’m here,” Cooper said. “I love coming out here doing seven-on-seven, routes on air, team periods and being able to showcase my ability. To be able to run routes, that’s like the greatest thing to me. It’s kind of like an art to me. It’s like a painter drawing or something like that. That’s how I feel every time I run a route.”

Maybe that nothing isn’t going to stay nothing though, after all anything can happen in the NFL. On Thursday, NFL Network’s Ian Rapoport reported that there are at least three teams still interested in Berry’s service, and the only one who he named specifically was the Cowboys. He noted that Dallas “would still be in the mix” for the the 30-year old.

Rapoport notes that considering where we’re at (mid-June), Berry joining a team might be something that happens right before training camp. Teams are wrapping up minicamps and are going to enjoy a bit of vacation before camps begin; the Cowboys will head to Oxnard in late July… could Berry be among them?

According to @RapSheet the Cowboys “would still be in the mix” for Eric Berry.

It’s not over. (via @nflnetwork) pic.twitter.com/znhuophOj8

Scout’s Notebook: Cooper Rush bounces back after backup QBs were underwhelming to start OTA’s
Just as you start to think that the Cowboys need to shop for a replacement backup to Dak Prescott, Cooper Rush stood tall in today’s practice.

I’ve been super critical of the backup quarterback play during these practices, but I have to give credit when things turn around. Cooper Rush couldn’t have thrown a better pass than the one he let fly to Jon’Vea Johnson along the right sideline for 52 yards. C.J. Goodwin tried to put his right hand up to defend, but there was no chance. The ball was beyond his reach and right into the waiting hands of Johnson, who never broke stride on the reception.