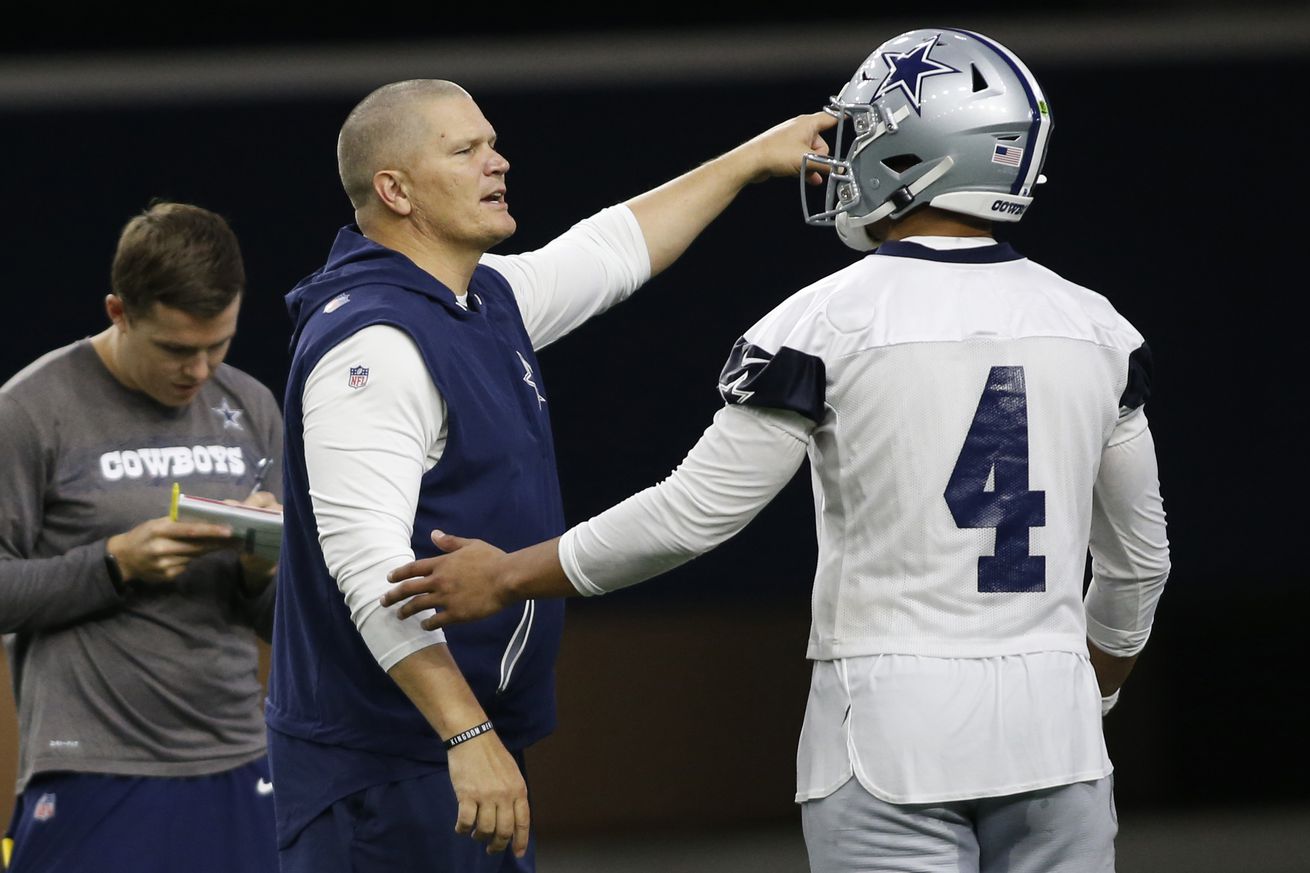 The OTAs and minicamp are in the books for the Dallas Cowboys. We now have training camp to look forward to and it is less that seven weeks away. This year, the anticipation is very high. Reports out of the helmet-and-shorts practices just concluded have been almost all good. And one very important player has gotten perhaps the most glowing reviews: Dak Prescott. Multiple sources have noted how evident his growth as a quarterback is. Here is a bit from Dave Helman of the mothership, quoting and seconding un-retired Jason Witten (who knows a thing or two about this game):

Witten said Prescott has been fantastic during the offseason program, leading the first-team offense through 10 crisp practices to this point. When he was pressed for details about that improvement, he cited the various ways Prescott has improved as a passer.

“I just think, from my perspective, the accuracy has been unbelievable with throwing to us,” he said. “The velocity on the ball, the anticipation of the throws. We run certain routes and nobody notices it, but that ball is coming out – when you’re coming out of the cut, the ball is already on you.”

That lines up pretty well with what’s been on display during the open practices. Prescott has looked efficient and accurate throughout the spring, and having the added time to work with Witten and Amari Cooper can only help.

After the final locker room session of minicamp, Helman tweeted this.

All memes aside, I loved this quote from Cowboy Dak today.

Someone asked him what has improved that helped him enjoy such a strong spring. #cowboyswire pic.twitter.com/ItRvG1c7RI

While Prescott has proven he is a winner and a leader both on and off the field, his relative worth as an NFL quarterback is still debated, often hotly. His accuracy and footwork have been among the things critics point to. There were certainly times when throws were awkward and missed badly. There were questions about his ability to grow into a truly elite quarterback.

Now, there is evidence that he has taken major strides in cleaning that up. It is preliminary and has to be confirmed in camp, preseason, and of course when the games count this fall. But the things referenced above were the only real issues he had. He is one of the best when the game is on the line with the clock running down. If he can now deliver consistent on-target throws to the apparently very strong group of receivers the team has put around him, this can be a very potent offense.

It was also noted by many that he took a step in the right direction after the arrival of Amari Cooper last season. This extended beyond just establishing an immediate chemistry with the new target (something that looks to be happening again with Randall Cobb as well). As someone said, a light seemed to come on for him at the same time. That is the “seeing it” he referred to. It is a logical thing to happen for a quarterback at this stage of his career. He is just now getting into what are usually the most proficient years for passers in the league. NFL quarterbacks generally face a steep learning curve, and the fourth year is often when they start to overcome that.

It also is an indication of the importance of hiring Jon Kitna to backfill for the promoted Kellen Moore as the quarterback coach. From the moment of his arrival, Kitna’s focus on mechanics and fundamentals, including the vital footwork need to deliver accurate balls, was noted. “Fixing” Prescott was seen as Kitna’s most important job. We are already seeing the effects of his work.

Much has been made of how Moore’s performance as the youngest, most inexperienced offensive coordinator will drive the success or failure of the Cowboys. Let me propose a contrarian view: Prescott’s improvement may be more important. While the replacement of Scott Linehan was certainly overdue, there were some plays that he put out there that failed because of poor execution, not because they were the wrong calls. Many of those involved those painfully off-target throws by Prescott. Moore himself states that the plays aren’t really going to be different, just incorporating more motion, misdirection, and deception pre-snap. He can also make a big difference with what he calls. Hopefully he will bring much-desired unpredictability to the table, along with getting away from the packages and formations that tip the defense to what is coming. But just having a quarterback that puts that ball in his receiver’s hands and away from the defender consistently will make thing go much, much better.

That is an argument that Kitna may be more important as a coaching move than many realize. All signs point to him having had a significant impact on Prescott already. Hopefully, he can do some of the same with the backups, who have unfortunately been stinking things up so far in the OTAs. But as an aside, there was one glimmer of hope there during the final day of minicamp. Since we have been using Helman as a source today, let’s go back to that well.

he also drilled Lance Lenoir on a 40-yard bomb that killed the safety coverage on what looked like Cover 2. fantastic throw and catch that saw Lenoir fall out of bounds just outside the pylon.

One thing all the quarterbacks on the Dallas roster have in common is youth and a lack of NFL experience (although Prescott, of course, has started every game in his short career). A steady and knowledgeable QB coach like Kitna can go a long way in improving things.

It is that partnership with the starter that is most crucial. It is still early, but everything looks absolutely great so far. This is the season of optimism throughout the NFL, but there is an extra helping of that in Dallas with what we have been able to glean so far. If this trajectory continues in Oxnard, this could be a very exiting year for Cowboys fans.