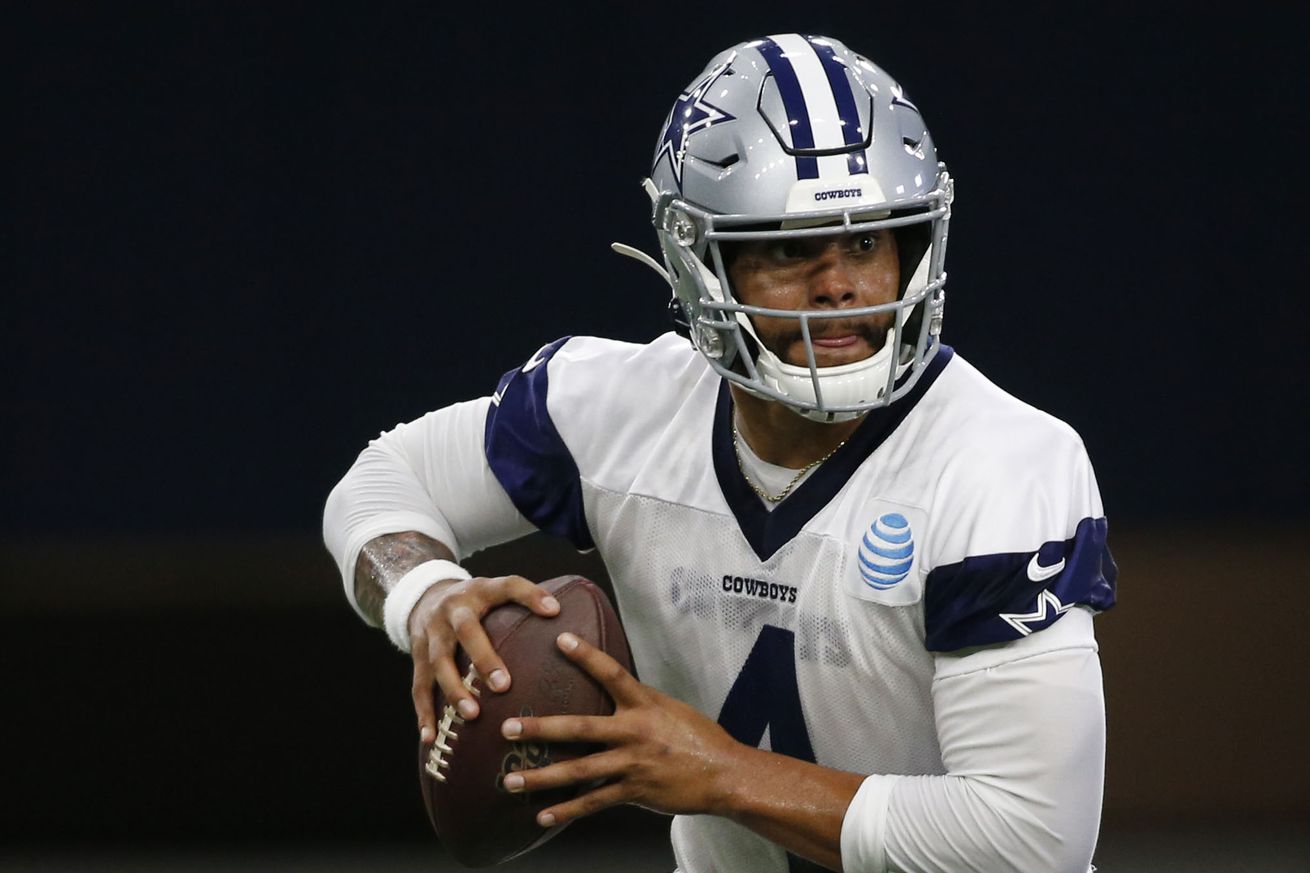 Committing so much money to Dak Prescott can be done sensibly.

The idea of committing a bunch of money to Dak Prescott for the next several years has created quite a stir among Cowboys Nation. The debate about giving him a huge contract rages among the faithful. While there are areas where he can improve, Prescott offers a huge breath of fresh air compared to some of the non-Tony Romo quarterbacks we’ve seen over the last 20 years. Michael Irvin said it best:

“Dolphins, Jaguars: They’ve been looking for a quarterback for almost 15-20 years. This ain’t easy to find. It’s not easy to find, and you don’t let one walk out the door if you got one.”

Some fans are okay with Prescott as the quarterback, but are worried about the financial implications of having a $30+ million franchise on the roster. It’s true that having a player chew up so much money inevitably has an affect on what the team can do. The biggest concern on everyone’s mind has to do with parting ways with talented players due to not being able to afford them.

Well, phooey on that. That’s not going to be an issue.

Keeping their stars will come at a price, but they’re already paying it. Not being able to retain players such as Ron Leary, Anthony Hitchens, and Cole Beasley are the most recent examples. And there’s a good chance La’el Collins is the next. The Cowboys will have to continue being cautious about who they re-sign, and some players won’t return.

But that price will not mean they have to let go of their All-Pro players. They don’t have to pick between Ezekiel Elliott and Amari Cooper. They can have both. And if the front office chooses so, Byron Jones and Jaylon Smith can both get second contracts. In fact, this is a real good problem to have. Normally, teams are still searching for talent and will resort to all kinds of risk-taking methods to find it, but the Cowboys already have a nice group of players. All they have to do is get them re-signed. And extending Dak to a long-term deal doesn’t not prohibit that.

If Prescott signs some $100+ million deal that pays him over $30 million annually, there’s no denying it’s a lot of money taken from the salary cap. But as we’ve seen the team do many times before, converting base salary into bonus money can be a quick and easy problem solver when they are constrained against the cap. Many players have done a restructure to free up cap space. Twice Tony Romo converted base into bonus, allowing the team to have extra cap space for those given years. The team could configure Prescott’s new deal in a way that would just as easily allow them to restructure money to free up cap space.

Of course, doing such pushes the cap burden onto the future, and the Cowboys have hurt themselves by doing that in the past, so the question begs…

Why would they want to go down that path again?

That’s a valid concern, but this situation is quite different for three reasons:

Tony Romo was 33 years old when he got his $100+ million deal. He was 34- and 35-years old when the team moved his base to bonus. After the last time they restructured his deal Romo would only make four more starts in his NFL career. That didn’t turn out like they hoped.

You could say it’s bad luck that Romo started having issues staying healthy, but he wasn’t a spring chicken anymore. With Dak, you’re talking about a 25-year-old quarterback approaching the prime of his career. He hasn’t missed a single game so durability concerns aren’t there. It would be a much more unsettling feeling if, for example, he hadn’t made it out of each of the last two seasons unscathed.

Not only is Prescott available on Sundays, but he has the second-highest 100+ passer rating percentage of any active starting quarterback with at least 32 starts, trailing only Aaron Rodgers. Prescott is still developing as a player, but even right now – he’s a viable quarterback. The team is not going to fall apart with him as their quarterback.

THEY’RE OUT OF THE HOLE

It may have not been apparent, but for years the Cowboys were chasing their tales. It started with signing aging players to big deals, only to take a big dead money hit later. They perpetuated this problem year in and year out. The term “cap hell” may be myth because the flick of a pen can always move money around, but the Cowboys have most definitely been cap impoverished in recent years. Over the past five seasons, the Cowboys have accrued the fourth-most dead money in the league.

The team has changed the way they do business. With minimal free agent spending, building through the draft, and cap-casualty sacrifices made in previous years, Dallas now ranks in the top five for the lowest amount of dead money for 2019.

To keep it that way, the team must continue to be smart about where their money goes. Investing in youth is a good start. Investing in high character players who can max out their potential also helps.

Not only are the Cowboys not in a big hole cap wise, but they also have already assembled a winning team. They don’t have gaping holes in the roster that needs major attention. As long as this team continues to draft well, the Cowboys will sustain a competitive roster. They aren’t forced to mitigate their talent problems through overpriced free agents like many other teams in the league are. Which brings us to…

How many times have we heard people talk about how Jerry Jones wasted the Romo years? While the team went to the playoffs four times with Romo under helm, there were many seasons where this team just didn’t have enough collective talent to go very far. Jones always believed the team was real close and it led to some suspect decisions like trading away a first-round pick for wide receiver Roy Williams.

The Cowboys have a very good team now. Keeping this team intact is important to sustain success for years to come. This isn’t about taking a chance on an unknown player to help push you up a level, but rather investing into a proven talent to keep the team firing on all cylinders.

Pushing money down the road comes with a price, but if the team has a legitimate shot at the title, why not pull the trigger? The Cowboys have done a great job grinding away at putting together a competitive roster, but as Matt Damon said in the move Rounders – if you’re too careful, you’ll whole life can become a grind.

Prescott’s a tried-and-true player whose high-priced contract would be perfect for restructuring. This practice may not be ideal, but it’s a tool. And Jerry Jones and company needs to use all the tools at their disposal to help bring number six to Dallas. If it means keeping the band together for a tour that lasts until February, I’m all in.