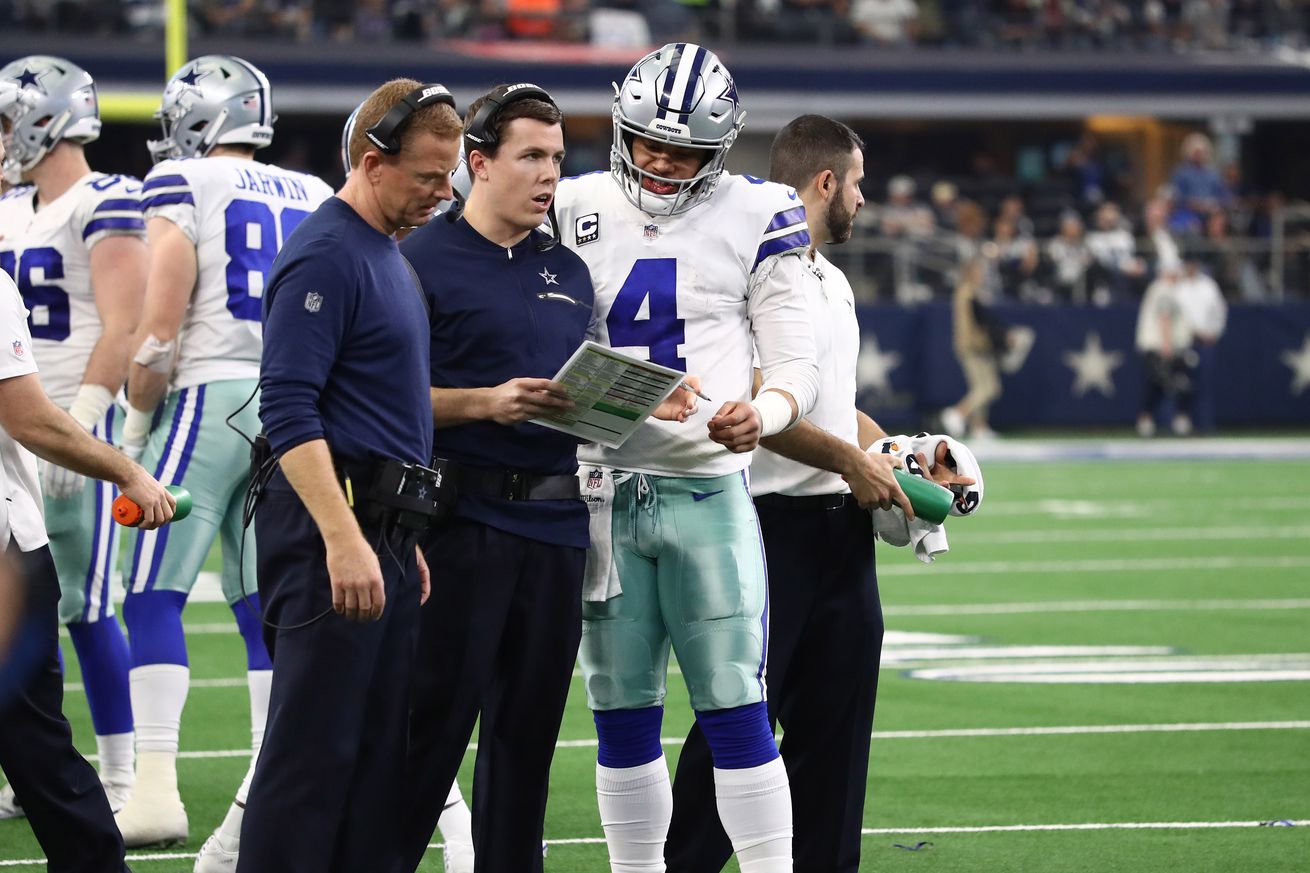 It’s easy to forget all the good plays that happened the past few years.

If you follow the Dallas Cowboys, perhaps you have heard that they have a new offensive coordinator. In all seriousness, the promotion of Kellen Moore after only one year coaching at any level to replace Scott Linehan was the most significant decision made by the senior leadership. The success or failure of the team is directly tied to just how things go for Moore. If he is able to bring some fresh ideas and correct the more glaring issues under Linehan, this could be a great year for the talent-laden team. If he flounders, some heads are going to roll.

The reporting out of the OTAs and minicamp was generally very positive in this regard. One of my favorite insiders (whom I seem to be quoting a lot this week) had this to say.

to the naked eye, this offense looks remarkably different. plenty of pre-snap movement, lots of personnel groupings we aren’t used to seeing.

I have no idea if it will translate to actual games, but it’s very obvious someone new is calling the offense. https://t.co/MAyfe9L8n0

It’s sounds great. Predictability, relying too much on the same plays in similar situations, particularly in the red zone, and too little movement by the offense pre-snap were among the biggest criticisms of Linehan last season.

But just how much will things change? The Cowboys offense during Linehan’s tenure was really Jason Garrett’s, and the head coach is not just still around, he is in a contract year. When your future employment in one of the most plum jobs in the NFL is on the line, there is certainly impetus to be more involved, not less. Moore himself has stressed that the plays themselves are not really changing. The new stuff is more about how they are presented to the defense, what personnel packages and alignments they are run with, and the order and situations they are called.

The question was summed up by Mac Engel in a recent article at the Star-Telegram. Now, I don’t quote him for various reasons, but even blind squirrels and stuff.

And Linehan brought Moore from Detroit to Dallas to be a quarterback, and then wanted him to be the quarterbacks coach over Wade Wilson last season.

To think that Moore will reinvent this Dallas Cowboys offense, or any NFL offense, or to deviate that far from Garrett, is asking a squirrel to become an elephant.

We are going to see offensive plays that were in the playbook last season, and the seasons before that. This is about tweaking and adjusting the offense, not rebuilding it.

But that is not as much of a concern as Engel makes it out to be. Remember, Linehan’s offense got to the playoffs two of the last three seasons, and it can be argued that injury issues on the offensive line and a failure to properly handle moving on from Dez Bryant were more influential in the struggles of late 2017 and the first half of 2018 than anything else. Once the team got Amari Cooper to fill the Dez-shaped void at wide receiver, Dak Prescott suddenly looked a lot better. There is reason to believe he is just going to improve this year. The offensive line looks to be much better this year with the anticipated return of Travis Frederick. And the offense has some very intriguing new weapons, highlighted by a standout showing in OTAs by Randall Cobb, plus an old one back in Jason Witten.

Let me try to present an analogy that hopefully won’t be too labored. Think of the offense like a race car. The car has a powerful engine, a well set-up suspension, and is fully capable of winning performance. It has just gotten some new, better suited tires to boot, so it should be even better. The real problem lately has been the driver. That’s the offensive coordinator, since in this illustration the quarterback is really the heart of that motor. The driver was just not good at picking his lane, missed too many shifts, and lacked the requisite aggressiveness. Now we have a new driver to handle this better-tuned version of the car. That should make a lot of difference even with the same crew chief running the overall team.

Although the top management didn’t think of it exactly that way, that explains why they chose to promote Moore rather than bring in an outsider to supplant Linehan. They have someone who knows the offense well. He is going to be focused on optimizing performance, not rebuilding things the way a new guy would have probably wanted to. Garrett is already comfortable with Moore. The fact they don’t have to learn how to communicate and understand each other is very valuable. And Garrett has plenty of experience calling successful offenses. He can provide input as needed if he sees things that need correcting, and if things really go off the track, he can always take the wheel himself. We certainly don’t hope it comes to that, but Garrett has the chops if he should have to get more involved.

Something else that has not been remarked on, at least that I have seen, is that Moore served as a relay when Linehan called plays from the booth last year. The play would come to Moore, who would then give it to Prescott. That is a nice bit of experience that should help Moore this season. He intends to call the game from the sideline, and that looks like a good decision.

All we have really seen so far from the new offensive coaching structure are some practice laps, but they have certainly looked good. As mentioned, the offense also looks to be humming along even better with the new parts that have been incorporated.

The theory the team is trying to prove is that the parts were there, but not used correctly. That is what Moore has been tasked to fix. We have to see how it all comes together this season, but there has been nothing so far to indicate that it won’t work, and some very encouraging hints that it will. If it does, we will always have to wonder just why Linehan flubbed so badly at times. He did find a lot of success, sometimes almost despite himself. And as he sometimes complained, there were breakdowns in execution that led to some of the failures as well. That looks like another focus for this year’s edition of the team.

Now the new OC has to put it all together and get this team to produce. With the hints of better execution we saw the past few weeks, that certainly looks very possible.

Hopefully, it all leads to a lot of trips to the winner’s circle this fall.