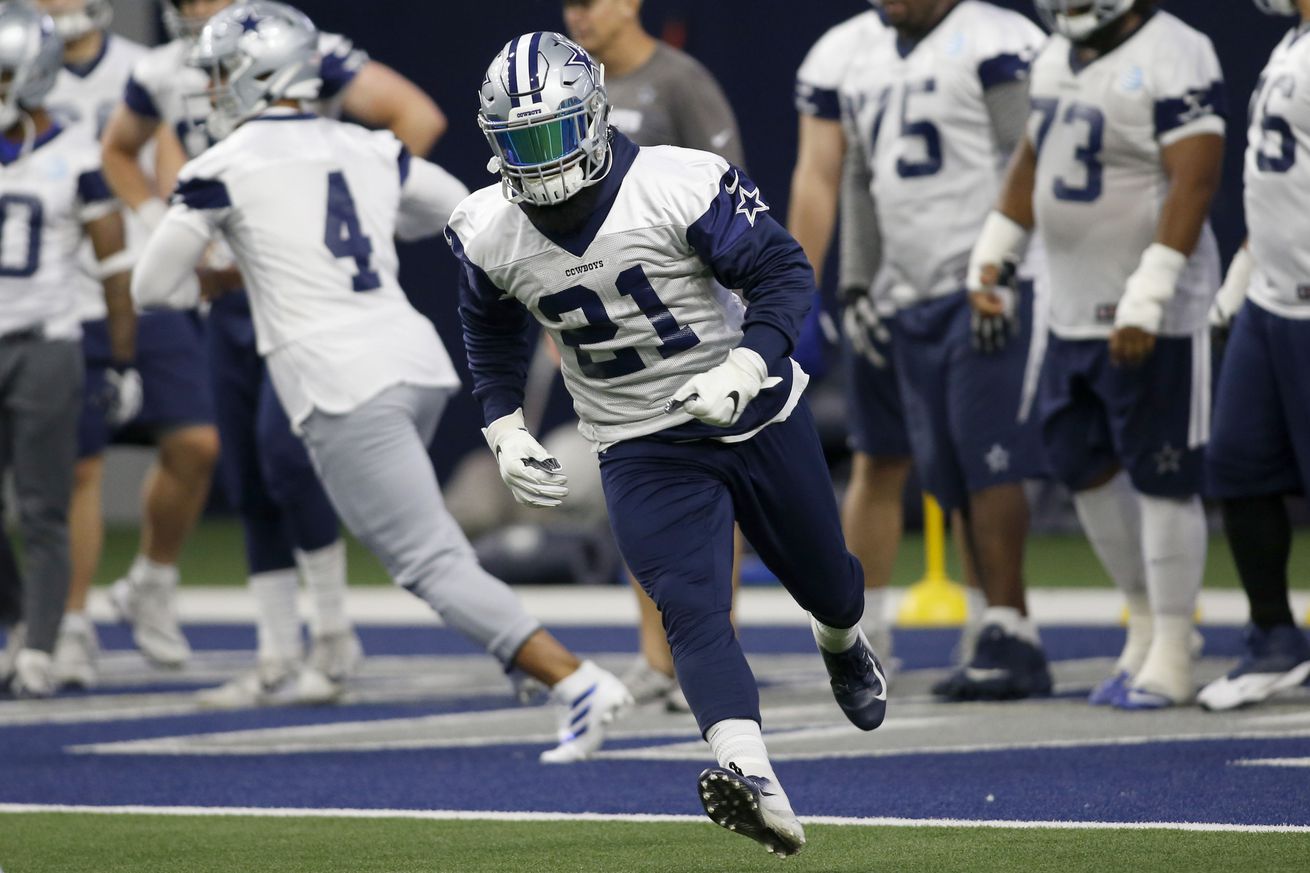 For a change, it may not just be all about Ezekiel Elliott.

With the wait for training camp under way, we’re taking a look at all the position groups for the Dallas Cowboys, with the focus on whether the team was successful in improving each during the offseason. You can find the link for the first one at the end of this article if you want to see what was said about the quarterbacks. This installment looks at the guys who normally line up nearest the QB, the running backs (including the fullback position).

For the past three years, the story of the running back position has mostly been about Ezekiel Elliott. He has led the league in yards per game played every year since he was taken with the fourth overall pick in 2016. He is the focus of not just the running attack, but in Jason Garrett’s offense, he has been the motor that drives everything. So far he has delivered.

However, there is quite a debate raging right now about the true value of running backs. Don’t get your dander up, because we aren’t going to get into all that here. But one thing that has emerged is that running back production is largely a volume stat. If you have a decent line and an offensive scheme that makes the running game effective, your back will get a lot of yards if you give him a lot of carries. Now, Elliott has been a real warhorse for the Cowboys. The only thing that has really stopped him for any length of time is the commissioner’s office. At the moment, there is no one better than him at his job.

What can be said about his value is that he could be used much more efficiently than he was last season. We all became sick of seeing the Cowboys trot out a heavy set in a short yardage situation, only to have the opponent load up the box and stop Elliott for little or no gain. That is why it is possible that the expected changes under new offensive coordinator Kellen Moore may be just as important for the running game as they are for Dak Prescott and the passing attack. Perhaps even more so, if the hints of multiple formations, personnel packages, and pre-snap motion come to pass.

So just looking at Elliott, there is good reason to think that the running game is stronger than it was last year. But there are other things that also should make this group better.

First are the two new draftees, Tony Pollard and Mike Weber. Pollard has generated the most buzz of any draft pick, despite not being taken until the fourth round. But he is more than a typical running back. He is very fast and a true weapon as a receiver. In college, he was often split out to good effect. He can be a true “change of pace” back, filling a role the Cowboys have been trying to utilize since the days of Lance Dunbar and that they tried again with the trade last year for Tavon Austin. But Pollard is much more, because he can also be a very dangerous in the traditional role of going between the tackles or outside on sweeps.

While we shouldn’t expect Ezekiel Elliott to see his workload cut much beyond the occasional series to rest up, as he has gotten in his first three years, we might see Pollard join him on the field. Don’t forget that Elliott is also a very capable receiver, and it would serve the team well to get him the ball in space more often. So one way Moore can throw a wrinkle out there would be to motion either Pollard or Elliott out wide, which could be used for either a run or a pass. He could also keep both in the backfield. Imagine an option run with Prescott having both a pitch man and a lead blocker.

While we are on that subject, we need to bring fullback Jamize Olawale into the discussion, because he is believed to also have been very underutilized last season. He did show some real flashes as both a runner and a receiver in his earlier years with the Oakland Raiders. Just like with a package that gets both Elliott and Pollard on the field, better usage of the fullback could yield some good results.

This again falls on Moore, who obviously has a lot riding on his performance. But fresh ideas and better play calls are what he was promoted to provide.

Mike Weber has a tough challenge ahead of him, because he is likely competing with veteran Darius Jackson for the backup running back, and in a recent article, DallasCowboys.com listed Jackson as one of the ten biggest surprises of the OTAs. The Cowboys have a tendency to favor veteran players when the cut down comes at the end of camp, and if Jackson continues to shine he would have a big leg up on Weber. That may mean that the rookie is really fighting for a chance to make the practice squad, if there is no injury that forces things in a different direction. Given the low value that most teams place on running backs, and how plentiful the supply of veterans is each year, the odds are that Weber could be successfully stashed.

There is one other name involved in the running backs, Jordan Chunn. He is often forgotten, as I did in an earlier piece looking at the overall depth of the current roster. He might wind up competing with Weber for a PS job, but would have to do something remarkable to have any shot at the 53.

One other thing could mean that the running game is going to improve this year, and it was mentioned in the earlier QB article. The offensive line looks to be back on track to again be one of the best in the league. Obviously the quality of the blocking directly affects the performance of the backs, so that is another thing in the plus column.

With Elliott back, things are solid, and the additions and possible tweaks to the scheme, the running back room is just like the quarterbacks. It looks stronger. There is still the lingering threat of a suspension for Elliott (deja vu all over again), but the team continues to be optimistic that is not in the offing. They felt that way in 2017, however, so we will hold our breath. But even if the worst does happen, the backups look much more capable this time around.

This is another position group where the outlook is very positive. When you add some quality depth behind the best in the NFL, it should.

Here is the link to the first part of this series.