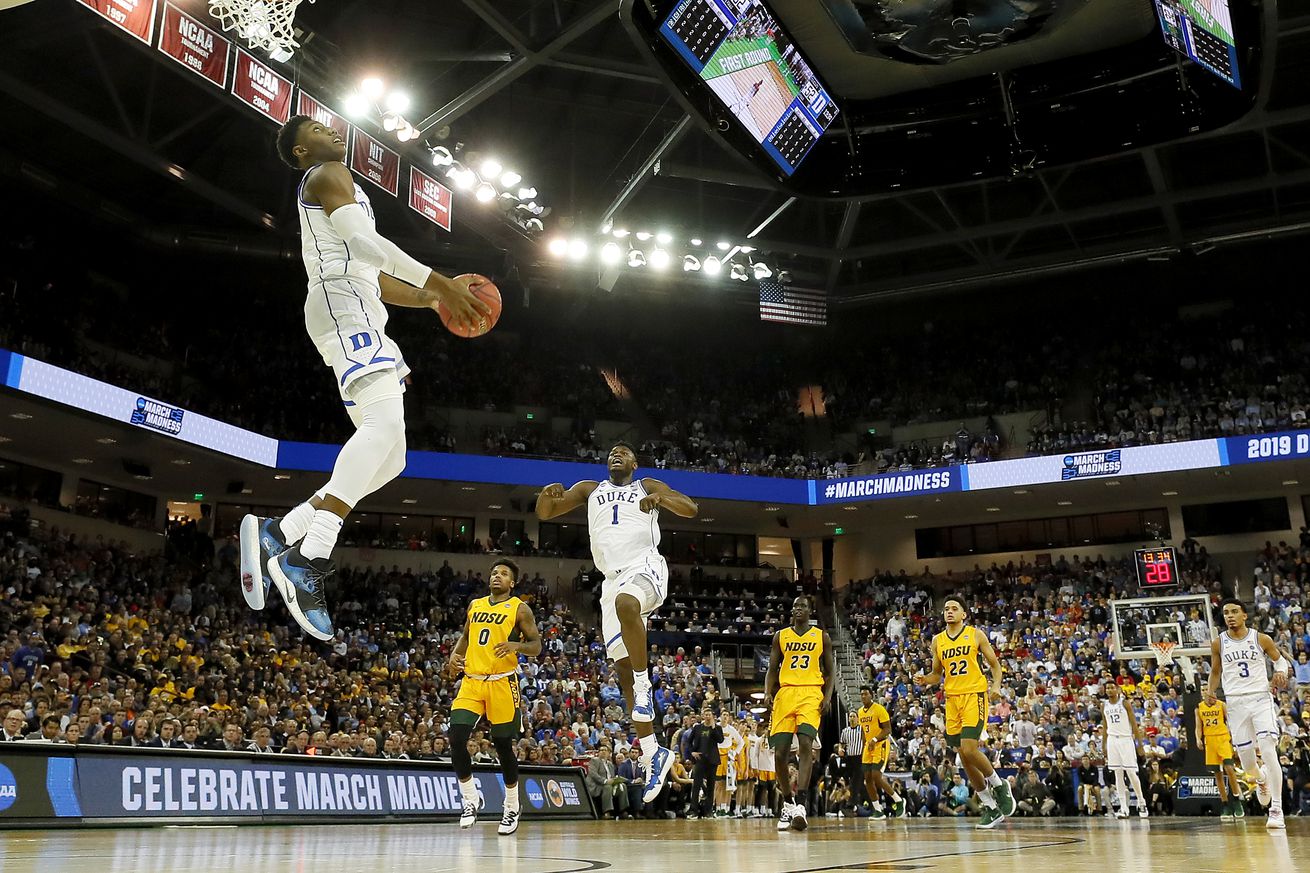 If the top five NBA draft picks played football, how would they fit in with the Cowboys?

It’s not NFL draft season anymore, so we decided to incorporate the NBA draft season into Dallas Cowboys football. This NBA draft class is loaded with exciting players of different sizes, from different backgrounds, and with different expectations. Let’s take a look at the top five selections of the 2019 NBA Draft and see how they would fit in with the Dallas Cowboys given their size and athletic ability.

The Pelicans selected Zion Williamson out of Duke with the first overall pick in the 2019 NBA Draft, this really shouldn’t surprise anyone. Williamson is by far the most exciting NBA prospect, he possesses elite size and athleticism. It doesn’t take genius to figure out what position Williamson would play for the Cowboys.

With his size and athleticism, Williamson would be a dangerous tight end target that would be a matchup nightmare against defensive backs due to his size, and linebackers due to his speed and athleticism. Williamson also was measured with a 6’ 10.5” wingspan and 8’ 7” standing reach, which would make him pretty much unstoppable in the red-zone, and would provide him with an insane catch radius. One of Williamson’s biggest strengths at Duke was his rebounding skills and physicality he played with when in the air, that would translate well to body control and contested catch situations in the NFL. Again, this is all a projection, but there’s no question that seeing Zion Williamson in the NFL would be very fun to witness, it wouldn’t shock anyone if he turned into a great player either.

Kris Richard likes his corners tall and long, right? Yes, and Ja Morant would fit his prototype nicely with his 6’3”, 175-lb frame. Along with his size, Morant has plus length, and plays with exceptional athleticism. For being somewhat undersized, Morant plays with plus physicality when driving into the lane, and finished well at the rim for a shooting guard.

With Morant’s blend of size, athleticism, and length Kris Richard would love Morant’s ability to lineup on the outside and play physical at the line of scrimmage against opposing wide receivers. Of course, sub-180lb corners rarely play, so a much needed weight program would be needed to add some bulk to Morant’s frame, but it would be a ton of fun to see the former Murray State all-star use his athleticism to ball-hawk in the secondary alongside Byron Jones.

I’ll still never get over this block that Ja Morant had at Murray State… pic.twitter.com/ewA0LaO30u

Projecting a position on the field in the NFL for Duke’s RJ Barrett wasn’t as easy as the other two guys above. There aren’t many 6’ 6”+ wide receivers in the NFL, but RJ Barrett would be worth taking a chance on.

At 6’ 7”, 202-lbs, Barrett would provide the Cowboys with a tall, long wideout that could win on the outside using his size and physicality. On the court, Barrett plays with great effort both on the offensive and defensive side of the ball, which would transfer over into the blocking game on offense. Barrett lacks elite athleticism, but has enough to be able to win at the catch point with his leaping abilities and length with a 6’ 10” wingspan. Barrett would likely struggle in-between the 20’s, but could serve as a matchup nightmare in the red-zone, and could potentially develop as a deep-threat on the outside.

Who remembers Arden Key coming out of LSU just a few years ago? That’s what I see in De’Andre Hunter when trying to envision him on the gridiron. Key measured in at 238-lbs at the NFL combine, and played much lighter in his years at LSU. De’Andre Hunter has some quickness to his game to pair with his exceptional length and strength.

Hunter showed the ability at UVA to run the floor, and showed no issues in space as a defender or a shooter. One of Hunter’s biggest strengths was his ability to develop as an offensive weapon throughout the year. As a young pass rusher entering the league, showing the ability to develop is something many young guys struggle with. Of course, Hunter would be a bit under-weight compared to the weak-side defensive ends that Rod Marinelli normally likes, but it’d be hard to ignore his blend of size, length, and athleticism at the defensive end position.

Hawks (via Pels and Lakers) select De’Andre Hunter with the No. 4 pick in the NBA draft pic.twitter.com/iDzlER4MNk

The Cowboys love taking risks on injured players with very high ceilings. Darius Garland fits that mold perfectly, and recently those risks have worked in the Cowboys favor. After playing just six games in 2018, Garland injured his meniscus and spent the rest of the season wearing street clothes.

Even with the injury, Garland was an intriguing enough player for the Cavaliers to take him inside the top five. When healthy, Garland’s strengths are his shooting skills, the ability to create space, and passing skills. With how accurate he is as a shooter and passer, Darius Garland sure would be an intriguing option at quarterback. Along with his accuracy both as a shooter and passer, Garland has shown great court vision to find the open man, and create good ball movement. Of course, the Cowboys are not looking for a starting quarterback, but they are in great need of a backup quarterback. With Garland’s blend of instincts, accuracy, and athleticism, backup quarterback seems like the best fit for him in the Cowboys offense.

Cleveland gets another PG

Cavs select Darius Garland with the No. 5 pick pic.twitter.com/OfaD3kIEsW