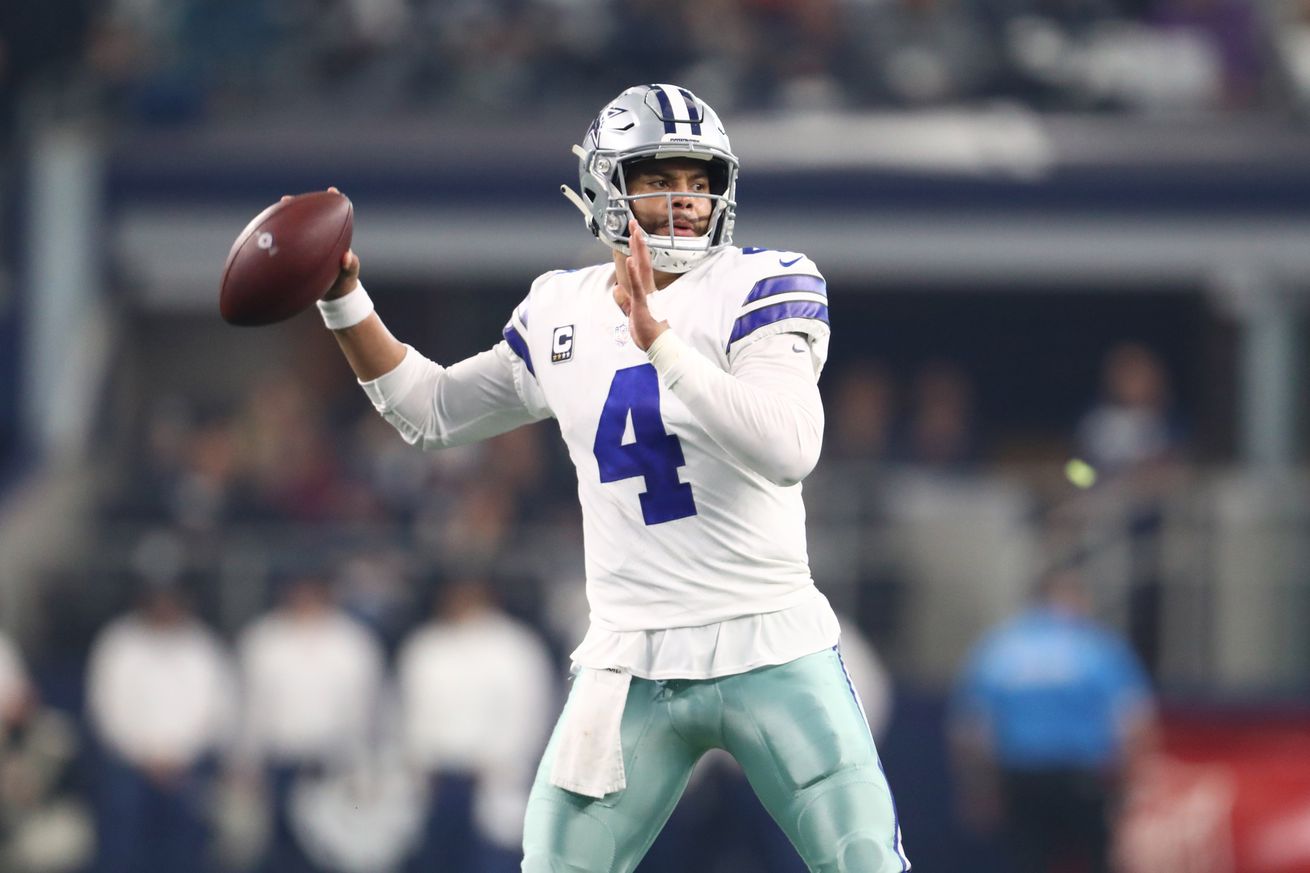 Have faith that Dak Prescott will lead the Cowboys to new heights.

There is a strange dissonance in the perceptions of Dallas Cowboys quarterback Dak Prescott. Opinions about him range from having great potential to not really being very good. The team is faced with a need to get a contract extension done with him as the NFL market price keeps going up. That topic creates heated debate between those who see the price for your starter at the position as being in the $30 million plus per year range and those who think he and his agent would agree to $25 million or less. One recent post (that I won’t link too because it smacks so much of click-bait) even suggested Dallas should trade Prescott and go find one of those quarterbacks standing around at the Home Depot or something. It is a ridiculous idea, because true franchise quarterbacks are in very limited supply, and not all NFL teams actually have one on their roster. Still, the argument rages about just how much value he brings to the team.

That is going to seem like a silly thing to haggle about after this season, because Prescott is going to establish himself in the top levels of the league. He will be solidly in the quarterbacks in the top 10, and likely be in the discussion for being top 5.

Admittedly, that is my opinion, but I have a lot of confidence in it. Here is what drives things.

First, his resume is already one of the best in the league for any quarterback during the past three years. During that time, he has led his team to more wins than any QB not named Tom Brady, Ben Roethlisberger, or Drew Brees – and he is tied with the latter two. Team wins is not a true QB stat, of course, but no player on an NFL roster has more impact on his team’s success than the QB. You have to give him some credit for the success or failure. With Prescott taking snaps, the Cowboys have seen a lot of success, even if they have not broken through in the playoffs.

He is also incredibly good when the game is on the line, In his three seasons, he already has led nine fourth quarter comebacks and fifteen game-winning drives. That is a remarkably high number for someone with only 51 games in the NFL.

The stats are nice (and probably a bit familiar to you), but they say something else about Prescott. He has more than just talent. He has intangibles of leadership and coolness under pressure that few can rival.

His detractors will point to the slump he was in from mid-2017 to mid-2018. There is no question that he was badly rattled by the Atlanta Falcons game where he was sacked eight times behind an offensive line that was frankly broken. The fact it took a full year for him to get back in form is cited as proof he is not really good. But the line problems continued throughout the 2018 season as Travis Frederick was lost to illness for the year, among other issues. And it is not a coincidence that Prescott snapped out of his slump when the team admitted the failure of the “receiver by committee” approach and traded for Amari Cooper. Having a true WR1 boosted the entire offense. Cooper is very good, but Prescott was also quite good at getting him the ball to make plays.

So Prescott has a good foundation coming into this season. But past performance does not guarantee future results. The real reasons to be so optimistic about Prescott this year are based on what has been done around him by the team combined with his OTA/minicamp practices, in particular one specific development.

To start with, though, the organization has truly gone all in on supporting and aiding Prescott. First was the necessary jettisoning of Scott Linehan. One of the former offensive coordinator’s issues was that he had a hard time breaking out of his comfort zone, and that zone featured more traditional roles. A pocket passer who mostly made shorter, safer throws, a dominant number one receiver to get the lion’s share of passes, a workhorse running back, and play-calling that was so predictable that opposing defenses literally would shout out what was coming with alarming accuracy. Prescott brings some different strengths that were sorely underutilized, like his running ability, how well he can throw on the move, and an ability to go deep that was really disregarded. His college background made him a perfect player to incorporate some features of the more open, innovative college schemes, but that wasn’t how it was done.

Now, the team is riding with Kellen Moore, whose greatest strength is supposed to be his familiarity with those college trends and how to work them into the Cowboys’ offense. And there is an aspect of Moore’s promotion that has been reported but perhaps not understood for what it signifies. Prescott is a big fan of Moore as a coach. Remember that Moore was the QB coach in 2018, but he was more an intermediary between Linehan and Prescott. His responsibilities focused on communicating the game plan and play installation to the quarterbacks, and then during games, he actually had Linehan giving him the playcalls from the latter’s spot in the press box, and Moore would then relay them over the helmet radio. I’m pretty sure Linehan didn’t think of it this way, but essentially Moore was getting some real handy on-the-job training to move up to offensive coordinator. Now, he will be working with a quarterback with whom he already has good rapport. I believe he also has an innate understanding of how Prescott plays and what he can do, since Moore did things much the same way when he was a record-setting QB at Boise State – although with considerably less athletic ability and arm strength. Part of the excitement to see what Moore does with his new job is just how well he seems suited to run an offense helmed by this quarterback.

And, as discussed before, the addition of Jon Kitna as the new quarterbacks coach is another key element in helping Prescott. Moore’s strengths seem to lie much more with X and O strategy and tactics, so he was not the guy to help Prescott with the mechanics that sometimes broke down and led to some very poor throws. Kitna is the opposite, a former high school coach who seems to love coaching up his players. Keep that in mind, because we’ll circle back to it shortly.

Meanwhile, the staff brought in some very exciting new options to throw to. Cooper already made an immediate positive impact and now has had a full offseaon to build on that. Randall Cobb is showing every sign of the same kind of instant chemistry so far. Rookies like Tony Pollard, Jon’Vea Johnson, and Jalen Guyton show a clear desire to add speed to the group. And the return of Jason Witten brings back a great possession receiver and security blanket that Prescott has two year’s experience with. It is a completely opposite situation from last year, when the committee approach fell flat during the first half of the season. Don’t discount the expected improvement in the offensive line, either, since better pass protection is always a key to better performance passing.

While OTA and minicamp practices offer only limited data about how players are doing, everything that came out about Prescott this year was positive. Those mechanics that Kitna is responsible for looked nearly flawless according to observers from the media. Prescott (as well as the backups) was heaving a lot more deep balls, and in the starter’s case, with good accuracy. Things seem to be coming together, fast.

Part of this may be attributable to a normal growth and progression curve. This is just his fourth year in the league, and that is a time many quarterbacks start to truly realize their potential. Prescott alluded to this when he talked about how a light came on at about the time of the Cooper trade, and he was suddenly seeing the field and the defense much better, and getting all the way through his reads in the time it used to take him to work through the first and second. Players talk about having the game slow down for them when they hit their peak level, and it certainly sounds like Prescott is experiencing that. If it is true, it makes him a better quarterback.

There’s one final thing reported that may be much more significant than many realize. In his first three seasons, Prescott was simply not that good in practice, only really coming to life in game situations. Before he became the heir at quarterback as a rookie following successive injuries to Moore and Tony Romo, he was fighting with Jameill Showers to qualify as the third string QB. That was a direct result of those issues in practice. This year, however, he has been notably crisp and efficient from the start.

One of the reasons he has a lot of comebacks and game-winning drives already is that he had a similar pattern in many games, where he would have a slow start that was at times more pronounced in the second and third quarters. He would have to turn it on late to pull the game out. His quick start in the offseason practices are a good sign that he is going to come out of the gate a lot quicker in games this fall. That is very important, because when you go back and look at the results from last season, there were a lot of one-score victories – all but one, in fact. That is generally unsustainable over time, when things tend to revert to the mean. Now there is a much better hope he can lead the team to bigger leads early, and not have to either catch up or keep from having a lead eaten away.

It is a lot of different things that need to come together, but there are already signs that all of them are working together. Predicting that Prescott is going to be challenging to be one of the elite quarterbacks in the league may seem bold, but the signs are all pointing in that direction. I think Dak is going to make believers out of all of us.