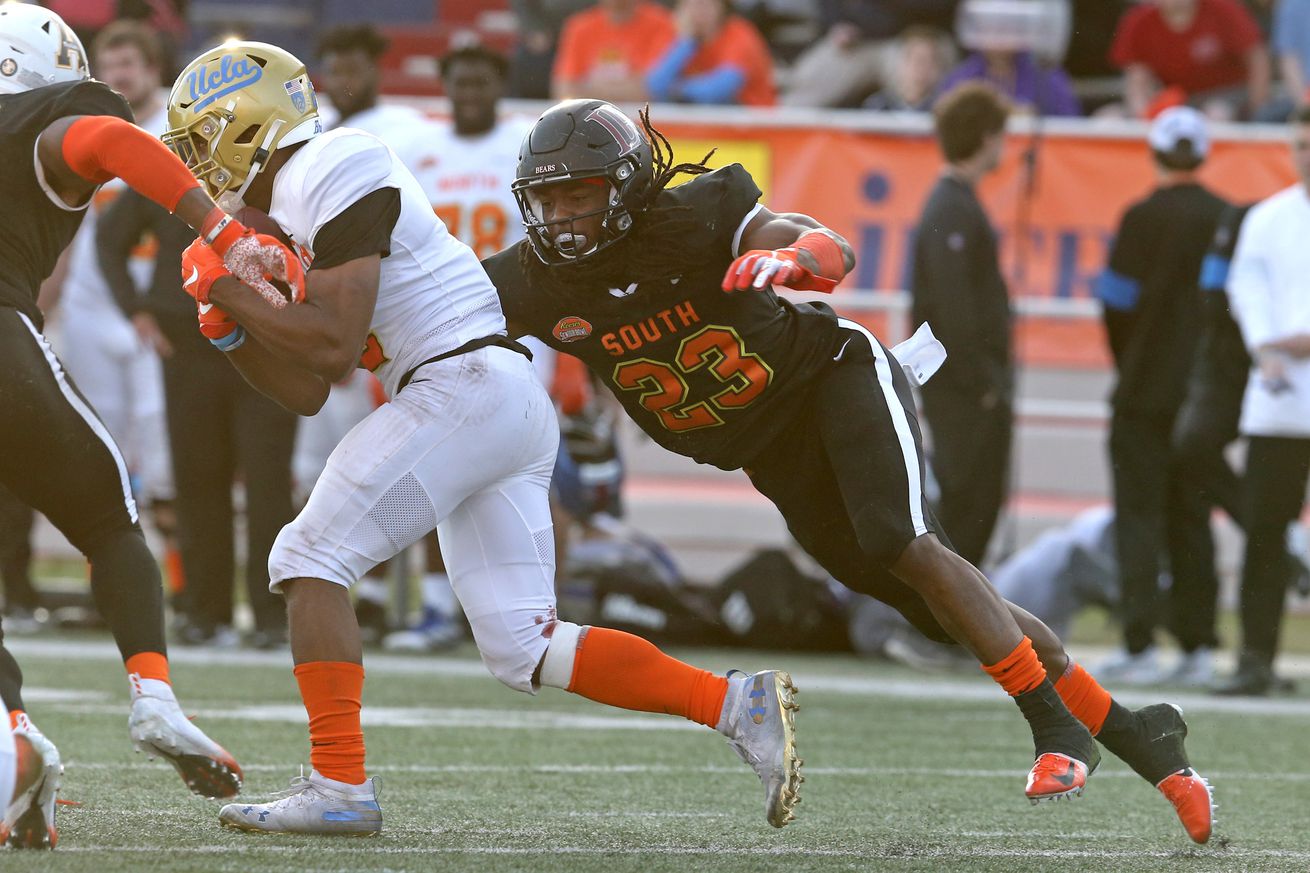 Talk about a Senior Bowl stock rise, Kyle Dugger made himself millions of dollars with his dominant week in Mobile just a few weeks ago. Coming into the week, Dugger was projected to go early day three, before dominating the countries top senior players all week, and pushing himself into the top-50 conversation.

Kyle Dugger’s play-style matches the needs of the Cowboys defense, and would immediately help them on both special teams and as a hybrid defender on defense.

Size, athleticism, versatility. Kyle Dugger has it all. At DII Lenoir-Rhyne, Dugger absolutely dominated his competition, and was always the best player on the football field. Weighing in at 6’1” 217 lbs at the Senior Bowl, Dugger won the weighs in, showing off an impressive physique, bulked up from head-to-toe. He plays with excellent athleticism for the strong safety position, showing the ability to play with sideline-to-sideline range, come downhill with insane explosiveness, and bringing great intensity when tackling.

Listen to BTB’s interview with Kyle Dugger on Talkin’ The Draft!

At his size, Dugger may end up being one of the most athletic defensive backs coming out of college. He excelled both in man-to-man coverage responsibilities, but showed the instincts to play as a zone-defender as well. Does an excellent job around the line of scrimmage attacking runners angles with awareness, and has the length to wrap up ball carriers when the ball does get outside the tackle box. Rarely misses tackles when playing in the box. Fearless player that welcomes the big collisions in the middle of the field. Read-and-react skills jump off the tape when seeing things develop in front oh him. Impressive ball skills, and abilities to win at the catch point. Has the ability to play strong safety, free safety, or hybrid-linebacker roles at the next level. Was an excellent special teams player in college, and hopes to continue that aspect of his game in the NFL.

Has a tendency to drop his eyes at contact when coming downhill as a tackler. Can be overly aggressive when flying downhill, which can lead to over-pursuing ball carriers. Has flashes of being a little stiff in the hips when asked to change directions. Needs to be more ball aware in the running game, far too often he loses the football on running plays. An older prospect that had two redshirt years at Lenoir-Rhyne. Jump from competition is still a question, even with the success he had at the Senior Bowl.

If Kyle Dugger had attended any other division one program, I think we’d be hearing him talked about as one of the top safeties, but since the jump of competition is so massive, he automatically drops a tier or two. Dugger’s ability to play a hybrid role in today’s NFL will make him a hot commodity for NFL teams looking for defenders that can play multiple roles. Dugger’s ability to play the pass just as well as the run, paired with athletic and physical traits, make him one of the most intriguing prospects in the 2020 NFL Draft. He would be an excellent day two addition for Mike Nolan’s defense to pair with Xavier Woods on the back end of the Dallas defense.

Kyle Dugger is going to be talked about as a SS/LB hybrid, but he has some reps showing off some range as well. pic.twitter.com/f0zuG9wD9q

Dugger flies down hill with authority. He has some snaps where he misses because of his aggressiveness but more often than naught he makes the play. pic.twitter.com/jXKXCs17Dy

Kyle Dugger was a man playing with pre schoolers at Lenoir Rhyne. Blows up the running back as the lead blocker and still makes the tackle on the ball carrier. pic.twitter.com/14LRY0XTR7

He’s a blur when coming down hill. The 4.38 number he gave us on the podcast is accurate. pic.twitter.com/U4pkPAFFZx

The click-and-close is all there too. He sees things so well with the football in front of him. pic.twitter.com/SsJtM0NFbl

Shows the read and react skills again here, but also makes a play on the football for the interception. Dugger is going to go in the top 60 after the combine. pic.twitter.com/7POJvopx5T

This is where I see him being the most effective at the next level. Making plays at and around the line of scrimmage. Using his size, athleticism, and length against the run, while also being able to cover backs and tight ends as well. pic.twitter.com/8944geCGnP

This shows some of the issues with Dugger. Can be a bit too aggressive attacking ball carriers. He drops his eyes open contact far too often as well. Both things are very correctable. pic.twitter.com/Dp9vLdIq1b