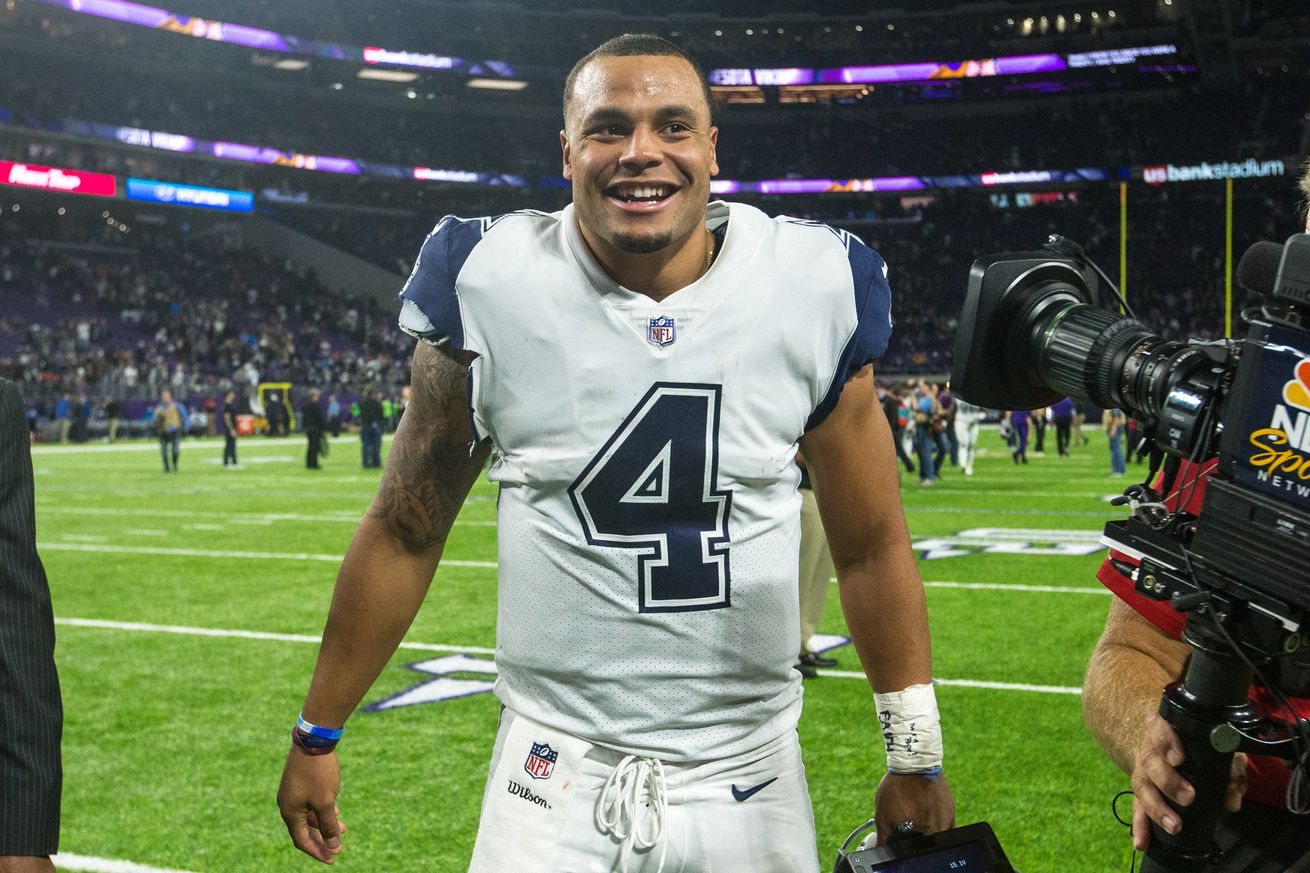 All the Cowboys news in one place.

Count Booger McFarland among those who think Dak deserves to get paid.

Opinions on Prescott’s contract extension have varied for months. But with his resume of taking the Cowboys to two NFC East Championships, combined with the fact that Prescott is coming off of the best year of his career, statistically, ESPN analyst Booger McFarland believes Prescott deserves his extension.

“You’re okay with paying Jared Goff, you’re okay with paying Carson Wentz. But when Dak Prescott wants his money, when he’s earned his money, when he has outplayed those two guys the last four years and his contract is expired, to me, yeah, Dak has eanred his money,” McFarland said on NFL Live on Thursday. “You may disagree with the amount and where he falls in line, but he is a franchise quarterback for, probably, the most profitable team in America. The man deserves his money. Now, 35 (million) may make you uncomfortable, but he’s earned that.”

Because he was a fourth-round pick out of Mississippi State in 2016, Dallas has been able to utilize Prescott’s services at an incredibly cheap rate over the last four years. According to Spotrac, Prescott’s initial rookie contract was for a little under $3 million over four years, averaging out to $680,848 per year. Prescott also got a signing bonus of $383,393.

Over those four years, Prescott has brought Dallas two NFC East Championships and been to the playoffs twice. Prescott has made it clear that he wants to remain in Dallas and work on taking the Cowboys back to the top of the mountain in his career. But he hasn’t gotten there yet.

The dream lives on!

For those among the Dallas Cowboys fan base who still wish to one day see a star land on the helmet of Jamal Adams, the dream lives on.

The All-Pro safety requested a trade from the New York Jets on Thursday, a source told The Dallas Morning News’ Calvin Watkins.

A source said Jamal Adams is frustrated and has requested a trade from the Jets.

A first-round pick in 2017, the Jets have already exercised Adams’ fifth-year option for the 2021 season, but Adams has been vocal for months about wanting a contract extension and has become increasingly frustrated with the lack of progress in negotiations.

The Cowboys offered a first-round pick to the Jets for the safety’s services at the trade deadline last season, but were rejected.

And while Adams would be an elite addition to a position the Cowboys have not invested valuable resources into in years, there is the question of Dallas’ future finances.

The debate over whether the Cowboys still need help at tight end continues.

I read recently that the tight end position would be the Cowboys’ biggest position of need and I would tend to agree with that assessment. If so and with Delanie Walker still a free agent; wouldn’t he adequately fill that need and if so why not sign him?— JOHN WALKER / AUSTIN, TX

Nick: Not sure what you read or from where, but the Cowboys don’t agree. They signed Jarwin to take over as the starter and signed Blake Bell as a solid No. 2 player to help as a blocker. They didn’t address the position in the draft. And if the Cowboys really wanted to sign a veteran tight end whose best days are behind him, they probably would’ve just re-signed the future Hall of Famer who was in the building and wanted to stay on the team.

David: If I haven’t made it clear by now, I’d like to state one more time that I’m a firm believer in Blake Jarwin. I think he’s going to bring a really exciting element to the offense. If it doesn’t work out, I’d rather just address the issue in next year’s draft than sign a veteran who is only going to eat into Jarwin’s playing time.

Zeke’s mom speaks about him getting COVID-19.

The case of Cowboys running back Ezekiel Elliott’s positive test for the coronavirus highlights how easily COVID-19 spreads.

After the news broke Monday of Elliott’s positive test, some wondered if it was linked to the party he attended last month at quarterback Dak Prescott’s house.

Elliott’s mother, Dawn, shared on Twitter that it was something far less conspicuous. It came from being around someone who initially had no symptoms.

“His sister and I tested negative,” she tweeted. “We were around someone who tested positive 3 days after we were with them, which is why we were tested. You can be walking around with it and never know, because you have ZERO symptoms. Chew on that for a bit!”

Mick Shots: Let’s Not Try To Mask The Problem – Mickey Spagnola, The Mothership

Looking a little deeper at the Cowboys history with first-year head coaches.

History Lesson: Saw this note on NFL.com, saying the Cowboys could only hope new head coach Mike McCarthy follows Barry Switzer’s lead, having led the Cowboys to a 12-4 record and the NFC title game in his first year as head coach. That commending Switzer, and comparing his first year to only that of Jason Garrett (8-8 in 2011), Tom Landry (0-11-1 in 1960) and Jimmy Johnson (1-15 in 1989). Man, how ‘bout some ‘splaining. Landry’s was an expansion team with no college draft for that season. Johnson was taking over a 3-13 team, a third consecutive losing season under Landry. Garrett was taking over a 6-10 team after Wade Phillips was fired in 2010 for his 1-7 start, serious rebuilding in need. Switzer? Uh, he inherited back-to-back Super Bowl champions from 1992-93 (13-3, 12-4). Maybe the writer wasn’t around back then, but Switzer was badly criticized for not winning a third consecutive Super Bowl. Oh, and as for first-year records of Cowboys head coaches, Phillips did go 13-3 in 2007, matching the best record in franchise history, while Chan Gailey went 10-6 in 1998, as did Bill Parcells in 2003, all three teams losing first-round playoff games.

Gerald McCoy is joining the fight to get Juneteenth recognized as a national holiday.

At the start of the week, Dallas Cowboys defensive tackle Gerald McCoy did not know Opal Lee’s story. After a WebEx call with her earlier in the week, McCoy will walk 2.5 miles near his Oklahoma home on Friday as Lee continues her fight to make Juneteenth a national holiday.

Lee, 93, a retired school teacher, will begin her second walk from Fort Worth, Texas, to Washington, D.C., in the past four years on Friday in her attempt to get Juneteenth recognized.

McCoy took to Instagram on Thursday to challenge current and former teammates to get involved.

“I’m so glad she brought awareness to this — that’s why it’s so great, that’s why I’m trying to spread as much about this as possible so this becomes regular on Juneteenth, walk 2.5 miles to commemorate the two and a half years the slaves didn’t know they were free,” McCoy told ESPN. “This is something I’m going to continue and be glad to continue. Even when it becomes a national holiday, I’ll do even more then.”

Juneteenth celebrated the official ending of slavery when Gen. Gordon Granger read orders on June 19, 1865, in Galveston, Texas, that all slaves were free some 18 months after the Emancipation Proclamation went into effect on Jan. 1, 1863.

We have a new show joining the BTB podcast feed starting tomorrow. Check out details on the latest episode of The Ocho.