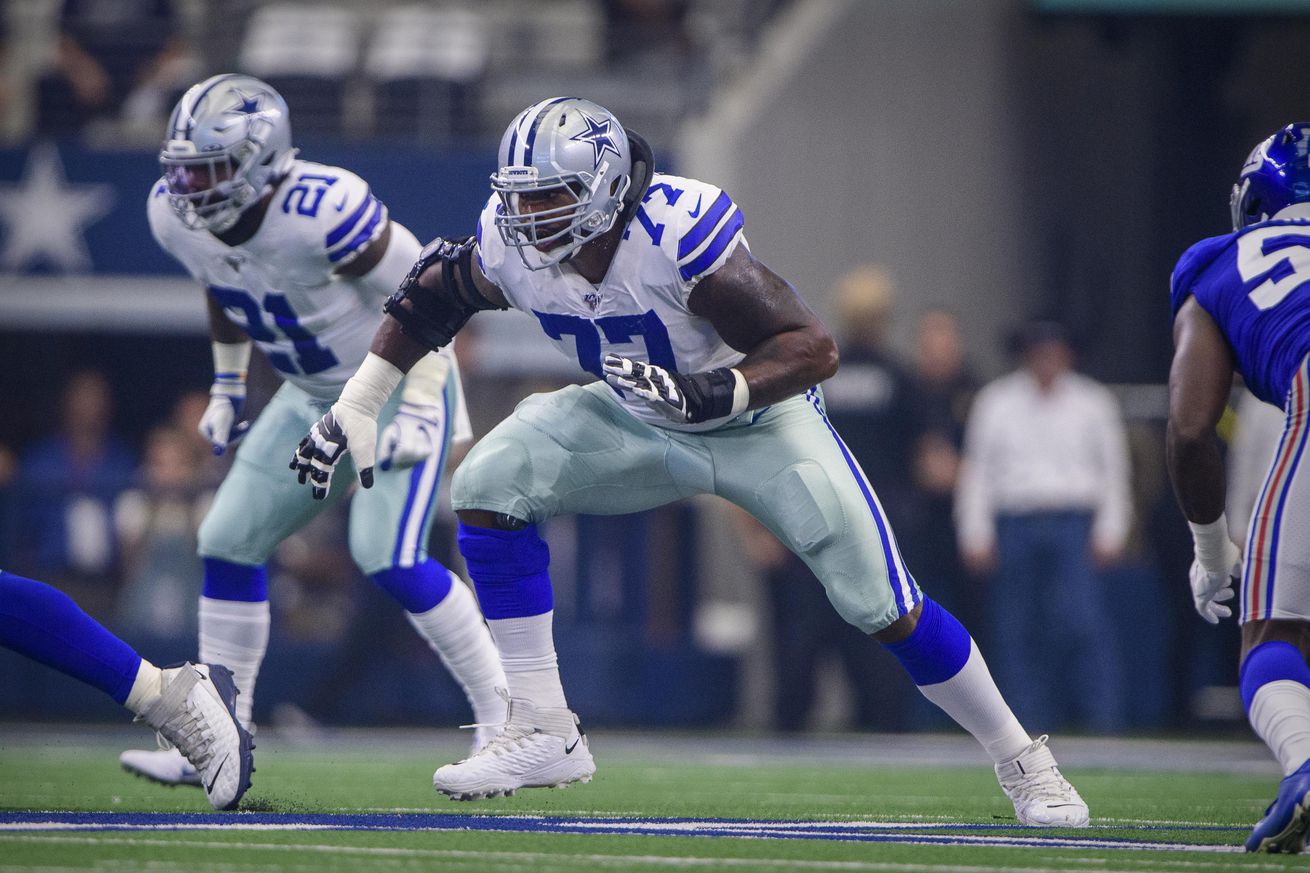 Taking stock of the best matchups at this year’s Cowboys training camp.

We were robbed of this matchup during last year’s camp, as Lawrence’s recovery from shoulder surgery prevented him from participating in practice during the Oxnard, California portion of Cowboys camp. Luckily, it appears that we will get to see these two titans of trench play battle each other during camp this year, as both players seem to be healthy entering camp.

In the past, when Collins was less experienced at right tackle, the 6-3, 265-pound Lawrence had a distinct advantage over the 6-4, 320-pound Collins in terms of skill on the edge. Collins has always had the type of power that could curtail a pass rush on contact, but he was lacking in the timing, balance and placement departments, which Lawrence could have taken advantage of with his advanced hand technique and footwork.

However, this year, Collins should be ready to truly test the depth and breadth of Lawrence’s skill set, as he improved a ton last year, to the point where he should have received an All-Pro nomination. Collins was much more balanced in his pass sets and displaced impressive variety and effectiveness with his hands.

Interestingly enough, when comparing their specific techniques against each other, Collins may have the antidote to Lawrence’s venomous hand techniques.

Cedrick Wilson will have to prove his worth to make the roster this season.

Career Highlight: All of Wilson’s five career catches came in the Cowboys’ 24-22 road loss to the Jets last October. He played a career-high 50 snaps with Randall Cobb inactive due to a back injury and Amari Cooper sidelined by a thigh bruise after only three snaps. In the fourth quarter, Wilson made a key third-down conversion on an 11-play, 84-yard touchdown drive that cut the Jets’ lead to five.

How Does He Make It: Well, safe to say we have a pretty good idea about the top three receivers. Cooper just made his second straight Pro Bowl with the Cowboys and got a $100 million deal. Gallup just posted a 1,000-yard season at just 23 years old. First-round pick CeeDee Lamb should be a featured part of the offense. But the Cowboys usually have five receivers on the active roster and sometimes as many as seven. Wilson is one of the Cowboys’ more experienced wideouts after the aforementioned top three. But he could face competition from Devin Smith, Ventell Bryant, Noah Brown and Jon’Vea Johnson, just to name a few.

As a 6-foot-3, 210-pound dual-threat playmaker, DiNucci has a versatile playing style that’s ideally suited for the NFL game. He is a capable quick-rhythm passer with a fast release and quick processing skills. The FCS standout quickly assesses the defense and gets the ball into the hands of the Dukes’ playmakers on the perimeter. Although DiNucci is at his best when tossing the ball around the field like a Black Jack deal at a casino, he creates big plays when improvises from the pocket. He has an uncanny ability to elude pass rushers while identifying and connecting with receivers down the field. The JMU standout racks up score after score on impromptu slip-and-slide throws or scramble tosses near the red zone.

DiNucci’s athleticism and improvisational skills add a dimension to the offense with his potential in the QB run game. He is an effective zone-read runner with a knack for pulling the ball at the right time, particularly near the goal line when defenses are keying on the running back. DiNucci’s running skills also make him a credible threat on the perimeter on bootlegs and naked passes. He is a unique playmaker with the capacity to make accurate throws on the run to either side while also displaying enough wiggle and burst to tuck-and-run on the edges.

From a critical standpoint, DiNucci’s improvisational skills and aggressive mentality can make him a bit of a wild card as a playmaker. He has a tendency to hunt for big plays and that can lead to turnovers as a pro. As a small school standout, he was able to get away with some throws that will become Pick-6s in the NFL. He must curb those throws to have a chance to be a successful game manager as a pro.

Will Amari Cooper Be Cowboys Most Improved Player in 2020? – Mauricio Rodriguez, Inside The Star

NFL Network’s analyst Cynthia Frelund projected on a recent article each team’s most improved player in 2020. The answer for the Dallas Cowboys might surprise you, but a quick look into it explains everything. According to Frelund’s projection, Wide Receiver Amari Cooper will be the team’s most improved player this season. At first, this answer sounds like a surprise. After all, Cooper had a good 2019 season. In Kellen Moore’s first year as offensive coordinator, the Cowboys had one of the most efficient passing attacks in the NFL. Cooper ended the year with 1,189 yards averaging 15.1 yards per catch.

That average per reception is great and is explained by Amari Cooper’s performance in the deep passing game.

Amari was able to post an 89.1 Pro Football Focus grade when facing top-10 coverage units last season. His level of play was reflected in Dak Prescott‘s stats as well, which prove he played better when targeting his #1 wide receiver, averaging 8 yards per attempt.

Will the Cowboys quarterback shatter Pat Mahomes’ record deal when he signs his new deal.

Former Green Bay Packers executive Andrew Brandt agrees, saying Prescott’s next contract will exceed Mahomes’ record-breaking numbers. La Canfora calls Prescott the league’s “real trailblazer” and expects the former Mississippi State star to be one of — if not, the — NFL’s highest-paid quarterback in the future. Coming off his best season as a pro, Prescott obviously believes it’ll happen, too.

“True leverage in this league comes from proximity to being able to hit the open market,” La Canfora writes. “Particularly at key positions where the Next Man Up mantra doesn’t hold. Prescott seems to embrace that. Mahomes forgave it. Both will experience generational wealth and prosperity and a peace of mind. Only one has a chance to be trailblazer, however, when it comes to shifting the NFL’s spending paradigms at least a little more in the favor of his peers.”

Cowboys owner Jerry Jones and Prescott weren’t close on the number of years, which turned out to be a deal-breaker during the negotiating process. “It should’ve been a no-brainer, but these are big boy business men,” Booger McFarland said last week on ESPN. “Dak wanted four years. Why? After three years, you get to come back and get another bite at the apple. Jones wanted five years so it would put negotiating out until at least after year four. He likes to make sound investments.

This is going to be one of the most unique lead-ups to the regular season that we’ve ever had. We discuss on the latest episode of Talkin’ The Star.